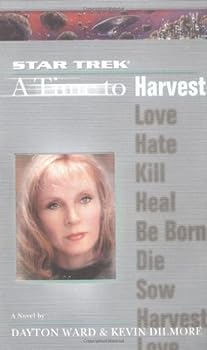 (Part of the Star Trek: The Next Generation Series)

by Kevin Dilmore and Dayton Ward

This description may be from another edition of this product. On the cusp of their epic battle with Shinzon, many of Captain Jean-Luc Picard's long-time crew were heading for new assignments and new challenges. Among the changes were William Riker's promotion to...

Published by Thriftbooks.com User , 17 years ago
"Harvest" is a fantastic conclusion to this two part story. It is full of the kind of excitment that those of us who love Trek expect. This novel takes off at breakneck speed and does a wonderful job at tying a TV episode to itself as well. It gives a great plot and offers yet another look at the "Next Generation" crew in the kind of fantastic action that fans have come to love. I highly recommend this novel along with its predecessor "A Time To Sow."

Published by Thriftbooks.com User , 17 years ago
I've read other Star Trek TNG books and by a host of other authors. However, in this book and "A Time to Sow" you'll read some of the best TNG trek out there.I won't say anything here that will spoil your read, other than in this book, the plot tightens up. The action gets more intense. Here, almost every key TNG character is heavily involved with some facet of the plot. In the end, it all comes together like a nicely tailored suit. It's clear that the authors clearly know the TNG characters as they are written extremely well. Unlike other authors (ahem..Vornholt?) who know very little about the TNG characters.The "old adversary" will keep you guessing and will probably hit you (as it did me) like a ton of bricks once you put the peices together. These two books (this and "A Time to Sow") are the best books of the "A Time to....." series. It's a must read.

Published by Thriftbooks.com User , 17 years ago
the book starts out slow but gathers lots of steam. the enterprise is still trying to help the dokaan people terraform a nearby planet when they discover lies and deceit from an old enemy who has grand plans of their own. the book is well written and the reader will not be disappointed in the end. i wish they would put wesley back in the story though because he made for interesting reading in the first 2 books of the series.

Published by Thriftbooks.com User , 17 years ago
I thought the A Time to Sow and A Time To Harvest books were much better than the first two in the series A Time to Be Born and A Time to Die. Dayton Ward and Kevin Dilmore did an excellent job of pulling together the story line that John Vornholt put out there in the first two books. I felt that the first two books didn't stay true to character and seemed a little childish and a little sappy. The story line was all over the map. As I said Ward and Dilmore did a good job of pulling that together. However, what I DID like about the first two books is that they really brought in a lot of the story lines that this series is claiming to fill in the blanks for. For instance Riker and Deanna's romance, Crusher's indesision for remaining on the Enterprise, and Wesley's leaving the Travelers. I wished that A Time to Sow and A Time to Harvest would have brought more of that story line into it. Instead it turned out to be just a good little stand alone story. The only ties to the rest of the series is the references to the plot introduced by John Vornholt. It could have easily come as a simple stand alone story. Very good book, good story line, excellent writing. Thanks for the read.

ST: TNG A Time to Harvest

Published by Thriftbooks.com User , 17 years ago
Star Trek: The Next Generation "A Time to Harvest" written by Dayton Ward and Kevin Dilmore is a wonderfully written conclusion to "A Time to Sow" also written by this dynamic pair of writers. This book is written to tell us what happens between the events that took place after Star Trek: "Insurrection" and before Star Trek: "Nemesis."I liked this book for the way the authors tell the story in a straight forward manner with enough retrospective introspection to recap the reader from " A Time to Sow" so you are upto speed on the events coming to you from this book. "A Time to Sow" left the reader up in the air as to some of the unresolved events but "A Time to Harvest" answers all of the reader questions in spades. "A Time to Harvest" has mystery, intrigue, and subterfuge. Along with plenty of action-adventure that will pique the readers immagination. There is ample detail that makes the story flow well and keeps the reader reading into the story to see what happens next. I don't get to say this very often, but I must say this that this duo of authors knows how to tell a good well-thought-out story.Captain Jean-Luc Picard is the main character in this book as he wrestles with his thoughts about what has transpired in the earlier books, "A Time to Be Born" and "A Time to Die." Also, there is retrospective from "A Time to Sow" as all of this gets filtered through Picard's thought process and makes for a well told and interesting story, which I really enjoyed reading.There is crew interaction and of course the bad guys are clever interlopers trying to steal a planet terraforming operation from the mild mannered Dokaal. The characterizations of the main group of characters in this book are spot-on ie. Picard, Will Riker, Deanna Troi, Dr. Crusher, Christine Vale, Geordi LaForge and Data. I enjoyed reading the thought processes that each of these characters goes through to reach a conclusion to a problem.If you are a fan of The Next Generation books this book series is your cup of tea(Earl Grey, Hot). As the U.S.S. Enterprise goes to the aid of the Dokaalan people the crew is met with a series of mishap and misfortunes, but through it all the crew solves these problems with some very clever innovating solutions.I can give too much of the story away as it will ruin your read, but trust me this is a good action-adventure that keeps the Enterprise and her crew on her toes... you'll enjoy the read.I gave this book a solid 5 stars for the reasons stated above. This story will move quickly and you'll be engrossed in a highly entertaining adventure.
Copyright © 2020 Thriftbooks.com Terms of Use | Privacy Policy | Do Not Sell My Personal Information | Accessibility Statement
ThriftBooks® and the ThriftBooks® logo are registered trademarks of Thrift Books Global, LLC