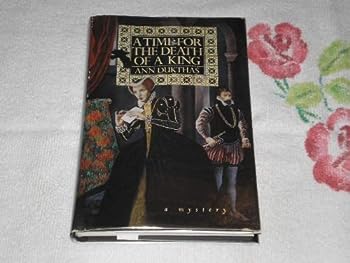 A Time for the Death of a King

(Book #1 in the Nicholas Segalla Series)

She was a passionate lover. Was she also a murderess? Edinburgh, 1567. Like an angel of mercy, beautiful Mary, Queen of Scots nurses her ill husband before suddenly leaving his bedside to attend the... This description may be from another edition of this product.

Published by Thriftbooks.com User , 16 years ago
This is a novel by Paul Doherty writing under the pseudonym of Ann Dukthas. Paul Doherty is the consummate professional when it comes to writing historical mystery novels. I for one do not know how he can be so prolific with his offering of books and yet make sure that each of them is well researched. Whether they be 13th, 14th, or fifteenth century they are always true to the period. He also writes about Ancient Egypt and the Greek period in history of Alexander the Great. This book is the first in a series featuring Nicholas Segalla, an immortal investigator of real-life historical murder mysteries. The subject of this book is the assassination of the Lord Darnley, lover and companion of Mary Queen of Scots. The novel has an unusual twist in that it open in the present day with Segalla give the author a manuscript that lays out his investigation 430 years ago and details of how Darnley was murdered. How Nicholas was sent to Mary's court and arriving in time to see the explosion that level the manor house at Edinburgh. It details how the body of Lord Darnley and one of the servants were found in a nearby orchard having apparently been strangled. The storyline built around an immortal sleuth who holds the answers to histories great mysteries is an interesting concept and I cannot ever remember reading anything in a similar vein. I enjoyed the book very much and look forward to more in the series.

The King is dead... was it the Queen?

Published by Thriftbooks.com User , 18 years ago
It is always fun to figure out whodunit in a mystery that has been left unsolved for centuries. In "A time for the death of a King", Ann Dukthas presents a very plausible solution to the murder of Lord Darnley, the second husband of Mary, Queen of Scots. What seems very romantic to me about Mary is the fact that, although she had the true Royal Blue blood that Elizabeth I lacked, she was to be Queen of England, Scotland, France and the Isles; she would - should have - been the most powerful Monarch in the medieval world and yet... for some obscure fateful reason, she didn't get to be. On Mary's behalf, I find that speaks a lot about her character. When she walked into England she practically gave herself up to her cousin. As Dukthas says at the end of the book, she was very likely tired from running (who wouldn't be?), tired of all the politicking around her, and wanted to live a life of peace, in a sort of quiet retirement. She would probably have achieved this, should she not have been who she actually was. Mary represented a great danger to the English Queen - or rather the English interests - and had to be given the ax, literally. This historical whodunit offers superb plotting and a deep, dark look into the masterminds that rule our powerful world. It is unbelievable how far people will go in their conquest of power, be it for a goodness or an evil reason. Dukthas is also a superb descriptor of the era, bringing us inside the palaces, making us watch the famous masques: "They watched as a great shipped constructed especially for the masque about the Merovingians, those long-haired Kings of France who ruled the country long before the Valois were ever heard of" (Page 26); and providing explicit details of the luxuries such as perfumes, clothing materials ("...those popinjays, dressed in their yards of shot red and yellow taffeta, gold damask suits, jerkins edged with silver and white Florentine serge stockings." - page 20); and delicious foods, that will send you mouthwatering to research history of fashion as well as for a glass of the best garnet you can afford. Such descriptions abound, but what is really touching is Mary, the Queen as a character in all her vulnerability. Regardless what her personality was in real life, her humanity in Dukthas' portrayal is so vivid, it fleshes her out as unique. Even the cover art is commendable, showing a haunted Queen of Scots in all her regalia, looking over her shoulder, as her husband lies dead in the orchard. The story takes us to the events of February 1567, that Sunday, the last night of the Carnival festivities, when Kirk o'Field blew up into a pile of ruble and Mary's husband and his personal aide were found dead in the orchard adjacent to the property. Dead they were, but hardly from such explosion. The bodies had no marks on them, no sign of a struggle, they seem "to be lying peacefully asleep," as many eyewitness accounts are reported to have said. Regardless of what really happened, th

Published by Thriftbooks.com User , 19 years ago
I'm a big fan of historical fiction and this one was especially interesting, with an unusual twist. The sleuth is immortal and is searching for the truth behind the death of Mary, Queen of Scots hundreds of years before.Great writing and descriptions give a beautiful picture of the time without being staid or boring.A great book for all history buffs or anyone who enjoys a good mystery!

Published by Thriftbooks.com User , 22 years ago
In the treacherous court of Mary Queen of Scots our story unfolds- and Sagalla, the immortal (we're never told how his immortality came to be)sleuth is sent to bring a secret messgae to the Queen- that danger is afoot for her and her ailing husband, the adulterous and empty-headed Lord Darnley. If you know anything about history you know that the warning was in vain, Darnley dies mysterously following an explosion of his residence- but its here where the story gets good. The Raven Master,Wollsingham's agent in the Scottish court has arranged for the murder to be blamed on Mary, and her supposed love, Bothwell. In order to save the queen, Sagalla must uncover the identity of the Raven Master, avoid the treasonous lords who want Mary's power for their own and find the spy(ies) that are endangering his position in court and his life. Using a cast of true, historical characters, and with only a little bit of bias (Mary was never as saintly as Dukthas makes her seem) the story becomes a complexe trail of clues that add up to murder, torture, adultery, treason and political intrigue. While often characters motives are left unclear and conclusions are drawn on evidence that is anything but understandable, the finished product is an enjoyable historical mystery that keeps you guessing to the last page.
Trustpilot
Copyright © 2022 Thriftbooks.com Terms of Use | Privacy Policy | Do Not Sell or Share My Personal Information | Accessibility Statement
ThriftBooks® and the ThriftBooks® logo are registered trademarks of Thrift Books Global, LLC