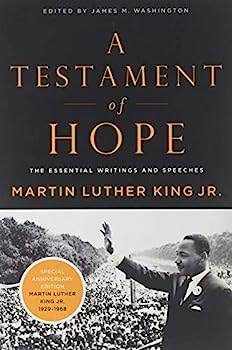 A Testament of Hope: The Essential Writings and Speeches

This description may be from another edition of this product. "We've got some difficult days ahead," civil rights activist Martin Luther King, Jr., told a crowd gathered at Memphis's Clayborn Temple on April 3, 1968. "But it really doesn't matter to me now...

Published by Thriftbooks.com User , 12 years ago
If you want to know the real MLKjr and all that he was and stood for, this is the book to read. It provides a full disclosure of this man, his beliefs, his sacrifices and his call for justice. Until one reads this resource, they only have part of the story.

"There are just laws and there are unjust laws..." *

Published by Thriftbooks.com User , 13 years ago
Yesterday, the 40th anniversary of MLK's assassination, I spent the better part of the day thumbing through A Testment of Hope. The book is an old friend of mine. I've read and reread it for nearly twenty years now, both privately and with students in at least a dozen classes. What I like so much about editor James Washington's collection is its comprehensiveness. In a single volume, one finds MLK's thoughts on nonviolence, civil rights and integration, the Vietnam War and poverty, Christianity and social responsibility, and justice and morality. His ideas are conveyed here through essays, sermons, interviews, and lengthy, meaty excerpts from his five books. Everything that one could want is here, including what I personally take to be his very best work: "Letter from a Birmingham Jail" (1963), "Love, Law, and Civil Disobedience" (1961), "A Christmas Sermon on Peace" (1967), "A Time to Break Silence" (1967), the "I Have a Dream" speech (1961), and Stride Toward Freedom's masterful discussion of the tactics and principles of nonviolence (1958). Today, four decades after his death, the country is still struggling to grow into MLK's vision of reconciliation and nonviolence. One can only imagine how sad he would be at the post-9/11 turn toward militarism the nation has taken, the current wave of sentiment against Latino immigrants, the constant economic disparity between white households and African American ones, or the upswing in hate crimes against Muslims. In re-reading A Testament of Hope, I was reminded yet again of how very much we need a present-day prophet of King's caliber, vision, and courage, and of how very grateful I am that we once had King himself. ________ * "And I submit that the individual who disobeys the law, whose conscience tells him it is unjust and who is willing to accept the penalty by staying in jail until that law is altered, is expressing at the moment the very highest respect for law." From "Love, Law, and Civil Disobedience," p. 49.

Published by Thriftbooks.com User , 16 years ago
A Testament of Hope is indispensible for a complete understanding of MLK Jr. the man. He was so much more than a monolithic figure of the Civil Rights movement. He was a pastor, theologian, philosopher, diplomat, husband, and father. A Testament of Hope helps the reader to grasp the multifaceted life of this icon of the twentieth century. This book lets the reader into the very human life of MLK Jr. Nowhere have I discovered a more cogent explanation of passive resistance than in the various speeches and essays contained in this book. If you are engaged in the struggle for civil rights or if you seek to better understand modern humanity more completely add this book to your library and consult it often. PAX Erik

Published by Thriftbooks.com User , 18 years ago
I learned more about Dr. King and his philosophies by reading his actual words than I could have learned reading a history or biography. I was surprised to learn that Dr King's journey was a long one even before civil rights movement, that he studied many schools of philosophical and religious thought. I was deeply impressed by his gifts with language, the ability to convey ideas in ways anyone can understand, and to inspire. Any writer could learn by studying his work.If you are interested in human rights questions, I recommend reading this piece by piece, though it is a large volume. So much of what King said isn't limited to the movements of 50 years ago, but to the ongoing struggle for human dignity and equality.

An important collection of writings

Published by Thriftbooks.com User , 20 years ago
"A Testament of Hope: The Essential Writings and Speeches of Martin Luther King, Jr.," edited by James M. Washington, is an impressive volume. This book brings together essays, speeches, sermons, interviews, and excerpts from King's books. Together, these many documents offer insights into the life and philosophy of a giant of the civil rights movement in the United States.The book includes the "I Have a Dream" speech, the letter from Birmingham jail, the "Playboy" interview, and more. There are even fascinating transcripts from two television appearances.This is a thought-provoking collection. I was fascinated by King's strong critique of that part of the white Christian establishment which opposed his movement. It is also intriguing to read that, apart from the Bible, King would choose Plato's "Republic" if he were to be marooned on the proverbial desert island with only one book. Also noteworthy is the emergence of King's multi-faith, global vision of humanity.This is an important volume for those interested in African-American studies, 20th century U.S. history, or progressive currents in Christian theology. But more than that, "A Testament of Hope" is truly a testament for all people.

A Testament of Hope: The Essential Writings and Speeches of Martin Luther King, Jr. Mentions in Our Blog 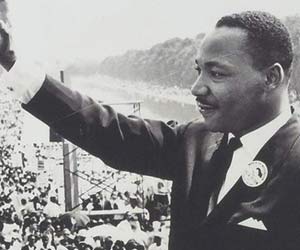 The Creativity of Captivity
Published by Ashly Moore Sheldon • April 15, 2020

This week marks the anniversary of Martin Luther King’s eleven-day imprisonment in Birmingham Jail. The treatise he wrote there became an important touchstone for the American Civil Rights Movement. But this is only one of many great works written within the confines of a cell.