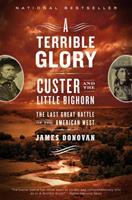 A Terrible Glory: Custer and the Little Bighorn - The Last Great Battle of the American West

A rousing and meticulously researched account of the notorious Battle of Little Big Horn and its unforgettable cast of characters from Sitting Bull to Custer himself. In June of 1876, on a desolate hill above a winding river called the Little Bighorn, George Armstrong Custer and all 210 men under his direct command were annihilated by almost 2,000 Sioux and Cheyenne. The news of this devastating loss caused a public uproar, and those in positions...

Published by Thriftbooks.com User , 14 years ago
When I saw a new book listed for publication on the topic of the Little Bighorn Battle a few months ago I was enthused. Let's face it, for those of us committed to this historical event, there's never enough to read. A Terrible Glory: Custer and the Little Bighorn-The Last Great Battle of the America West doesn't disappoint either. James Donovan's treatment is fair and detailed. As pointed out in other reviews, there is a lot of information included. Donovan also avoids the traps sprung on so many modern historians when they attempt to moralize the battle, Custer, and the U.S. Army. It has been well established after the digs of the 1980's that, contrary to so many theories, the 7th Cavalry was not well armed, and from modern analysis of the battle field did not conduct themselves as a well trained unit would have. Donovan uses this information, and also guardingly includes the accounts of the Indians present at the battle. I also have to compliment Donovan on his ability to provide context to the battle itself and to the United States at the time. His ability to provide strong narrative also makes the book read like a novel at times. In places, A Terrible Glory is a real page turner. The copious and well organized notes will also be of interest to the serious student of the battle. A Terrible Glory isn't for the casual reader though it is written in an easy style. Well researched and even handed, A Terrible Glory is highly recommended.

Outstanding History of the Battle and its Participants: Excellent View of Custer's Battalions Moveme

Published by Thriftbooks.com User , 14 years ago
A superior new book on the famous Little Bighorn Campaign based on primary sources and more recent historical analysis culminating in a very reasonable account of what happened to Custer's battalion once it descended into Medicine Trail Coulee. The author is a very gifted writer and his descriptions are so fluent that the book does read virtually like a well written novel. Donovan starts with a fast paced history of the Indians on the North American continent that directly leads to the Sioux and their current state of affairs in 1875-1876. Their history includes their migration west as they split from their eastern brethren, the post Civil War Red Cloud War that includes the emergence of Crazy Horse and later background information on Sitting Bull. The bio information on Custer is fast paced and accurate as the author moves you forward through his career with brief effective bios of the key members of his regiment that are key to the Little Bighorn battle. Within 100 pages, the author has you well familiar with the situation, the political and the military and the next 300 pages of text are loaded with information on the campaign preparation and the campaign as it unfolds. For the well familiar, the essential information leading to the divided commands will not be too new but the documentation and source material is excellent but the exciting part of the read is what is revealed when Custer reaches the bluffs, signals to Reno in the valley and proceeds to a northern attack point leaving his last white witness, the courier Martin, as his battalion descends toward the river. Donovan describes a very rational Custer who is anxious to stay on the offensive while apparently realizing that Reno's attack has collapsed but also knowing that Benteen's battalion should be arriving soon, a fact that many historians do not seem to give enough credit particularly since Custer's brother Boston had passed Benteen on his way to reach his brother and had done so by this time. The final actions of Custer's battalion heed an excellent mix of views by notable historians such as Greg Michno's (Lakota Noon) and Dr. Richard Fox (Archaeology, History, and Custer's Last Battle). Notable in that the Indian point of view is well presented such as those researched not only by Michno but by Richard G. Hardoff's series of researched Indian testimonies. What is quite rational in this analysis is that Custer, who was famous for adapting to situations tactically from the saddle was adapting as circumstances changed. He ordered up support and expected it to be coming promptly and he reorganized his battalion based on that premis. But the failure of support left him in the obvious vulnerable situation leading to the demise of his complete battalion. Although the division of his last battalion has been roundly criticized by many historians, his logical reasons for doing so are well defined by Donovan and linked to his expectation of command consolidation. The circumstances of Re

Published by Thriftbooks.com User , 14 years ago
For nearly a century and a half, the Battle of Little Bighorn has been a part of our nation`s collective knowledge and language, an event used as a metaphor for everything from foolhardy determination to one last, heroic quest. Even those who don't know of Custer's achievements in the Civil War or his desire for political office know that he was front and center in the most famous massacre in American history. Although many accounts of the battle exist, James Donovan`s "A Terrible Glory" claims to be the first book to relate the entire story, and the first to include new findings which significantly alter the perception of this battle, the military response to the events and the attraction the public has had for the great mystery of what happened in Custer's final hours. Donovan weaves overwhelming research and detail into his narration, often pausing and backing up to paint the full picture of the events as they develop. His characters, from Custer to Crazy Horse and General Grant, are presented with the depth of a Larry McMurtry novel, a monumental achievement in recreating men who died over a hundred years ago. He approaches the battle from all angles, allowing the different stories to slowly build toward their inevitable clash. The marriage of captivating story with enchanted researcher/writer often proves to be an incendiary combination. Donavon's meticulous approach and seemingly total immersion into writing this story create the feeling that the author rode alongside the subject of his life's work. With "A Terrible Glory", we ride with him.

Published by Thriftbooks.com User , 14 years ago
I'm a junkie on this subject. Have read most of the major books on the battle, so I'd say, honestly, I wasn't prepared to be impressed. But I feel compelled to write a review here because I'm so pleasantly surprised. This topic has been well published, but this new book is GREAT. This author must have done some serious digging, because this book includes material I've never seen in any other book. Robert Utley was right about this book (if you're not a regular of the genre, he's the dean of writers on the American West). He's quoted as saying 'the research into firsthand sources is broader and deeper than I have ever seen'. To Custerphiles like myelf, that says something. There IS a lot of information here, but it's skillfully blended into the narrative, and the author did a good job of synthesizing all the material (the Indian and white accounts, and the new archaeological and forensic research and analysis from the past few decades). It also seems like the author went to great lengths to show the Indian side of the story, which is a plus. As you'll see, the book contains 83 pages of notes. But don't let that fool you; it's not a dry, academic type of read at all. (In fact, I'd say it's better written than anything else I've read on this subject.) And there's a lot of extra supporting material in all those notes, if you want to read them. But, notes or no notes--this is just a great read, and a wonderful new entry in the field. Good job, Mr. Donovan. (And, by the way, your publisher did a nice job, too. I'm a "book" person, and this book is quite handsome, both inside and out.)

Published by Thriftbooks.com User , 14 years ago
James Donovan's "A Terrible Glory: Custer and the Little Bighorn: The Last Great Battle of the American West" is not a book aimed primarily at the serious student of the Battle of the Little Bighorn. There are numerous books published each year about this famous battle, but most of them are full of dense, intricate arguments about quite narrow aspects of the historical event and really only of interest to -- or even intelligible by -- the serious Little Bighorn student (I should know -- I am one; and I completely understand that many works that I find fascinating would inevitably be rated as "unreadable" by most readers.) Donovan's book is something else entirely: a thorough, highly detailed narrative, drawn from primary sources (not just a tired rehash of secondary accounts, as is too often the case with such books), mountains of evidence carefully sifted and weighed, resulting in a judicious, well-balanced, fair-minded analysis of what actually happened. It's a big book -- nearly 400 pages of text plus voluminous and valuable source notes -- that provides background and context and also vivid word portraits of personalities and activities. I consider it be quite simply the best available account of the Little Bighorn for the intelligent general reader who wants to know what was what and who was who, without those biases and distortions so common in writings about Custer and his last battle. In the book's foreword, Donovan comments that he has departed from the strict historical record only in the area of the part played by Custer's direct command after he had sent his last messenger. Of necessity, any account of those activities requires interpretation of highly conflicting evidence and of some plain-old educated guesswork -- and James Donovan has done a superlative job of crafting a reasonable, plausible account of what happened.
Trustpilot
Copyright © 2022 Thriftbooks.com Terms of Use | Privacy Policy | Do Not Sell My Personal Information | Cookie Preferences | Accessibility Statement
ThriftBooks® and the ThriftBooks® logo are registered trademarks of Thrift Books Global, LLC