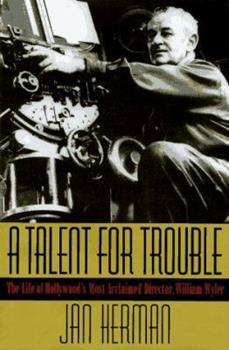 A Talent for Trouble: The Life of Hollywood's Most Acclaimed Director, William Wyler

The films of William Wyler (1902--1981) include some of the most memorable and honored motion pictures of all time; Jezebel, The Letter, The Little Foxes, The Best Years of Our Lives, The Heiress,... This description may be from another edition of this product.

The ultimate look at Hollywoods most honoured director

Published by Thriftbooks.com User , 21 years ago
A thoroughly engrossing book that delves not only in Wyler the director, but Wyler the man. This books offers a rare glimpse into the inner workings of this phenomenal director, from his early days as a young immigrant to becoming honored by the AFI. Learn what went on before, during and after some of filmdom's greatest movies (Mrs. Miniver, Best Years Of Their Lives, and Ben-Hur) as well as Wylers' time in the service, shooting award winning documentaries. As well as how the HUAC hearings impacted on his professional life and those he came to rely on, and how he dealt with personal triumphs and tragedies.Jan Herman has taken what could have been a dry retelling of movie making, and offers up a book that is both informative and entertaining.

A wonderful insight into a fascinating film maker

Published by Thriftbooks.com User , 23 years ago
Until I read this book, I had no idea that so many of my favourite classic films were directed by William Wyler.The book tracks through Wyler's early childhood in pre-WWI Europe, his move to the United States and how he made his start making 3 movies a week for his uncle.The book examines the process behind Wyler's great films - Roman Holiday, The Heiress and so on. Having read a biography of Audrey Hepburn and read about how she coped with the filming of Roman Holiday, it was really interesting to read the director's verion of what happened during filming. The quality of the final product was important to Wyler. He was a meticulous film maker who cared about his films. He was also a man of principle as shown by his efforts to make realistic fims during WWII, often puttin ghis wn life at risk as he shot footage of bombing raids over Europe.The book also shows a little bit of Wyler's personal life. He was married for most of his life to the same wonderful woman and had a family that he clearly loved.All in all, the book was a fascinating insight into pre-sound Hollywood and into a very interesting man and great director. It was extremely well written and an "easy read". It was tough to put down!
Trustpilot
Copyright © 2022 Thriftbooks.com Terms of Use | Privacy Policy | Do Not Sell My Personal Information | Accessibility Statement
ThriftBooks® and the ThriftBooks® logo are registered trademarks of Thrift Books Global, LLC