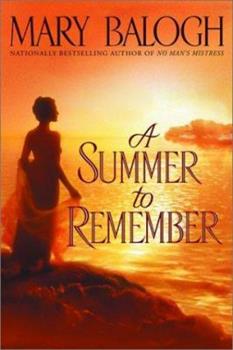 A Summer to Remember

(Part of the Bedwyn Saga Series)

"Matchless storyteller"(Romantic Times) Mary Balogh is at her spellbinding best in a new novel that features Lauren Edgeworth from One Night for Love as her heroine. The nationally bestselling author of More than a Mistress and No Man's Mistress weaves a tantalizing web of seduction, wit, and intrigue sure to delight her legions of devoted fans. Here she brings together an unlikely duo--a notorious rake and a very proper lady--who plot to scandalize...

If you only read one Regency romance...

Published by Thriftbooks.com User , 18 years ago
... do yourself a favor, and make it this one. This is my second-favorite romance of any genre, of all time. It is the most purely romantic novel I've read. Everything is perfect. The two leads are complex, interesting, vulnerable and flawed, and the tentative way they both slowly flower within their relationship made me weep, in more than one place within the story. I can't remember when I was more moved by a romance novel, and as a voracious reader of every star author of the Regency genre that is saying something. Few books even approach this one both in satisfaction of a great read by a skilled author or in the way the story itself resonated within me.The heroine Lauren was especially well-written. Her pride and gentility broke my heart. She is exactly what a regency-era heroine should be, but crafted in the timeless mold of a Jane Austin character. She isn't wild, or spunky, or goofy/silly/helpless, she isn't motivated by lust, or financial need, nor does she use the speech patterns and vocabulary of a modern American woman. She is British and she is refined, elegant, and every bit a lady. I wanted her to be happy. She deserved happiness.Likewise, Kit, her partner, is also exceptionally attractive as a human being and a man, not a cliche of the genre. He is a realistic man, not a real macho man, vulnerable, occasionally thoughtless, and refreshingly kind. The novel itself does conform to the standards of the romance genre, but not so much so that the inevitable conflict and resolution detract from the character's growing love for one another. They fall, and stay, in love. Isn't that, and not some sub-plot/murder mystery/comedy of errors/love-hate-love-hate abuse & forgive S & M knot the essence of a romance? Some may fault the story for not being lust-driven but I cheered the novelty and the skill of the author in crafting desire based almost entirely upon affection and mutual respect. I enjoy an erotic romance more than most, but I loved this gentler story even more. Get this book. You can't go wrong.

I am of the opinion that this book should be mandatory..

Published by Thriftbooks.com User , 18 years ago
reading for every aspiring author (and some professional ones too). Maybe then we readers would be spared some of those atrocious, embarrasing books that are being published nowadays (and become bestsellers too!! Who buys this dreck???) Anyway, the point of that rant is that Mary Balogh has produced a gem of a book, a true keeper in every sense of the words.After his older brother's untimely death the notorious Kit Butler inherited the title of Viscount Ravensberg (sp). His family, aghast at Kit's exploits in London order him home immediately to take his rightful place as the heir to a powerful earldom and also to fulfill his duty by marrying a bride chosen by his father and producing heirs. Kit, already estranged from his family, balks at his family's command and decides that he will find his own bride and marry on his own terms not his father's. He will even go a step further and instead of choosing someone completely unsuitable as his family would expect he decides he will choose the perfect lady.Lauren Edgeworth is the perfect lady. She has devoted her whole life to perfecting the art of being a lady. She thrives on prediction and takes comfort in routine. In short, Lauren Edgeworth is a dead bore (or so Kit thinks) therefore she is the ideal woman for his plans. Lauren surprises him by agreeing to be his fiancee in name only until he can find a bride not of his father's choosing. In exchange, Lauren wants Kit to give her a summer she will never forget. He readily agrees. At the end of Lauren's perfect summer she will break off the betrothal and move to Bath to begin the life a respectable spinster. However, for Kit this was easier said than done because he was not prepared for the other side of Lauren. He finds himself captivated by the woman hiding behind the icy facade, apparently afraid to come out. Since Kit is not one to resist a challenge he is determined to bring that woman out. In the process he finds himself caring far too much for his "pretend" fiancee.Lauren, on the other hand is determined to leave at the end of the summer with her heart intact. After her first wedding was scandalously aborted (see One Night for Love) Lauren is convinced she will never be able to love again. However, she is not made of stone and very soon she finds herself hopessly drawn to Kit. His devil-may-care attitude fascinates her and the pain she glimpses behind his laughing eyes and happy-go-lucky attitude brings her dangerously close to falling madly in love.Balogh has outdone herself with Kit and Lauren. Never before have I read a book with characters that were so perfect for one another. Kit is an absolute joy to read, his charm and endearing ways had me sighing over and over. Also, the dialogue sparkles and the developing relationship between Kit and Lauren is belivable and incredibly executed. I have said before that Balogh is the closest one can get to a modern day Jane Austen and this book just reinforces my opinion. In short, this is an incredibl

Published by Thriftbooks.com User , 18 years ago
Most historical romance bolsters on suspense/mystery to enthrall but not Regency mistress Mary Balogh who is hailed by Romantics Times as a "matchless storyteller" - her characters and full-fledged romance provide the stimulus. In A Summer to Remember, Ms. Balogh fashions her most beguiling creatures to date with the frigid Lauren Edgeworth as the perfect foil to the debonair adventurer Viscount Ravensburg Kit Butler. The demise of his elder brother Jerome has lifted his banishment from Alvesley to assume his position as heir to Earl of Redford. Striking a wager with his friends, Kit intends to make the prosaic beauty as his wife. It's just too bad that Lauren isn't a simpering neophyte and Kit confesses honestly his agenda, only to be surprised that Lauren wants a brief romantic summer interlude with him. She will break the engagement and be free from the marriage proposals that her relatives thrust her. They fall in love as in any romance novel but the courtship that segues from Vauxhall to swimming and tree-climbing is unfettered bliss and lush romance. Ms. Balogh weaves intimacy between the couple with tender passion and redemption. Lauren curbs her sunny side with her parents' departure; Kit is unable to forgive himself for the afflictions he caused on his younger brother Syd in his militant days.It is at once heart-wrenching with denouements and poignant with family reconciliations. With maturity and grace, Ms. Balogh resolves the conflicts and adds depth to the ensemble of sub-characters including Syd and Lady Muir. She employs the healing power to soothe personal anguish in the characters with emotional delicacy. A Summer to Remember is unadulterated romance of such rare beauty and elegance that it will be remembered as Ms. Balogh's most glorious outing.
Copyright © 2020 Thriftbooks.com Terms of Use | Privacy Policy | Do Not Sell My Personal Information | Accessibility Statement
ThriftBooks® and the ThriftBooks® logo are registered trademarks of Thrift Books Global, LLC