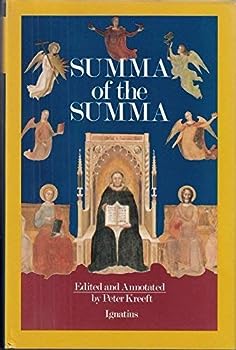 A Summa of the Summa: The Essential Philosophical Passages of st Thomas Aquinas Summa Theologica Edited and Explained for Beginners

This description may be from another edition of this product. Combines selected philosophical passages from Thomas' Summa Theologica with detailed footnotes and explanations for modern readers.

Published by Thriftbooks.com User , 15 years ago
Kreeft has reduced the most important parts of the Summa Theologica into about 130 pages in "A Shorter Summa". I appreciated the Glossary in the Introductory pages that provided the philosophical definitions of words like "accident", "essence," and "nominal", which Thomas Aquinas uses. If I came across a word I wasn't sure about later in the book, I could always refer back to the Glossary. The basic structure of the Summa is for St. Thomas to state a question such as "Can it be demonstrated that God exists?" Then St. Thomas provides the main objections to that idea and provides his own answer, while refuting the main objections. Kreeft has omitted some of the more arcane objections that philosophers no longer hold to be valid or important to keep the book as short as possible. The Catechism of the Catholic Church tells us that the existence of God can be known through the "natural light of human reason". St. Thomas is a good source to refer to in this struggle. He lays out the rational proofs of the existence of God in this book and doesn't appeal to emotions; he only asks you to use your reasoning skills. It's refreshing to see faith in God coming from reason rather than coming from the emotion of an altar call or jailhouse conversion. Kreeft has done a favor for amateur theologians who don't have the time to make it through the full Summa. While the reading can be bit dry at times, this is still a theological classic.

It has Aquinas, it HAS to be good!

Published by Thriftbooks.com User , 15 years ago
This very short book gives some of the most essential philosophical passages (as selected and footnoted by Kreeft) of St. Thomas Aquinas' Summa Theologica. For anyone who wishes to delve into Aquinas, but does not feel able to tackle the material by itself or even to try Kreeft's much longer "Summa of the Summa," then this book is perfect. "A Shorter Summa" allows you to stick you big toe in to test the water of Thomistic thought. No doubt you will find it to your liking, and wish to dive head-first into first-hand Aquinas with no footnotes!

Published by Thriftbooks.com User , 18 years ago
One need not be a Christian, nor even a Roman Catholic, to know of the centrality of Saint Thomas Aquinas to medeival philosophy. In his monumental work, the "Summa Theologia" (and, to a lesser extent, the supplementary tract "Summa Contra Gentiles"), Aquinas kept Aristotelian 'pagan' philosophy alive by applying its principles to the Church. Unfortunately, readers today (save for the most devout, I suppose) hardly have the time to read the whole thing. This is where Boston College's Peter Kreeft helps out. Further concentrating his previous Aquinian abridgment, the "Summa of the Summa," Professor Kreeft gives us the most accessible reduction of Aquinas's philosophy with "A Shorter Summa." Well-edited, well-translated, and well-organized, this small book is a fantastic summary of the monumental philosophy written centuries ago by the official Doctor of the Church.

Published by Thriftbooks.com User , 20 years ago
Kreeft does a wonderful job of picking the finer points of Aquinas' massive work - Summa Theologica. This is a condensed text for the beginning reader of St. Thomas' work. The book itself is organized in a way that includes the primary work of the Summa and Kreeft's comments. Thus, this makes for a wonderful read if you are trying to understand what Thomas was communicating in his work. The essential Thomas is present. In other words, Kreeft covers everything one would need to know to get a thorough grasp of Thomistic philosophy. Also, Kreeft does so in such a way that it makes Aquinas very easy to understand. The topics covered are Cosmology, the Nature of God, Aquinas' Epistemology, Proofs, Ethics, etc. This is a wonderful beginning text for anyone who is interested in studying one of the greatest philosophers who ever lived. Moreover, Peter Kreeft is well qualified to handle the Summa since he is a renown philosopher himself (Boston College Professor) and a Thomist of sorts. Keep in mind, that this book is not simply Kreeft's commentary on Aquinas, but it also includes the actual excerpts from Aquinas' Summa. That is one reason why this book stands out from other books about Aquinas. I would recommend this book to anyone.

Aquinas leaves every modern philosopher in the dust

Published by Thriftbooks.com User , 22 years ago
Have we really "advanced" since medieval times? Not in the realm of philosophy. Aquinas leaves every modern philosopher in the dust. The best kept secret of modern times. Read this book and see for yourself. Aquinas is a balm for the mind.Kreeft makes Aquinas accessible to the layman (like me). Kreeft's footnotes are very helpful. I am in awe of Aquinas' intelligence. I can only describe Thomas' teaching as rigorous common sense. Very rigorous, intellectually challenging, but very worthwhile. Read a section or two a day.For Catholics, Thomas is the premier theological Doctor of the Church. Count that as a recommendation.We are to love God with all our heart and mind. I can't think of any better way to love God with one's mind than by reading this book.
Copyright © 2020 Thriftbooks.com Terms of Use | Privacy Policy | Do Not Sell My Personal Information | Accessibility Statement
ThriftBooks® and the ThriftBooks® logo are registered trademarks of Thrift Books Global, LLC