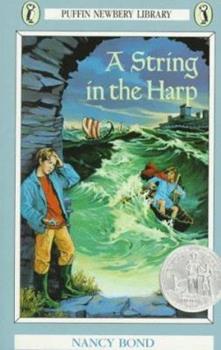 A String in the Harp (Puffin Newbery Library)

This description may be from another edition of this product. A family in mourning...an ancient bard...a harp key that brings them together... When fifteen-year-old Jen Morgan flies to Wales to spend Christmas with her family, she's not expecting much from the...

Published by Thriftbooks.com User , 15 years ago
Published in 1976, A String in the Harp tells the story of Jen, Peter, Becky, and David Morgan. The Morgan family has been separated by their mother's death and their father's decision to take a university teaching job in Wales, taking his two youngest children along. The book opens with Jen traveling to visit her family for the first time since the move. During her visit, her brother, Peter, finds a harp tuning key. This key, and the visions that it brings, will lead the family down an unexpected road in the months to come. This book is set in the same area, and to some extent concerned with the same mythology, as the last two books in Susan Cooper's The Dark is Rising Sequence. In its address of both family issues and Welsh mythology, A String in the Harp is an accurate and insightful work. Nancy Bond has painted the landscape of her tale with vibrant, true to life detail.

Published by Thriftbooks.com User , 19 years ago
"A String in the Harp" is one of the worthy fantasy books that is often overlooked, as it was published first in the 1970s and dips into complicated mythology that casual readers won't be able to absorb. However, it's an exceptional book for people who have read the Prydain Chronicles and The Dark is Rising sequence, and who are craving more.Since the death of their mother, the three Morgan children have become increasingly divided from their father David. Peter and Becky live with him in an isolated town in Wales, while Jen lives in the United States with her aunt. When Jen arrives on a vacation, she finds David distant and uncommunicative, and Peter sullen and angry. Despite the isolation of the town, Jen tries her hardest to enjoy it, and to keep her family from fragmenting further.Then Peter finds a harp tuning key, and begins getting glimpses of the past -- and of the legendary bard Taliesin. He becomes increasingly drawn to his visions of the past, and even vanishes in an attempt to uncover more about Taliesin. Jen tries to deny that the key is magical, but as Peter falls more and more under the key's spell, the three children must find out what they need to do for it.Bond weaves Welsh mythology and modern-day dilemmas together in a way that very few authors can. On one hand, we have the Morgan kids with their present-day actions -- hanging out with some Welsh friends, seeking a sheep-killer (who turns out to be connected to the key), and Jen trying to learn how to cook. She also does a good job of giving the readers a view of a fast-dying way of life in Wales, though these sections stretch on a little too long. But Bond outdoes herself in the glimpses of the past, in which the language becomes dreamy and evocative. In some areas it becomes reminiscent of Susan Cooper at her finest moments.People who want their fantasy generic, cute and mindless will not like "String." Nothing in the Welsh mythos is dumbed down for the audience, and younger kids will probably have difficulty keeping some of the legends straight. However, if readers handled other mythologically-oriented books, they will have no trouble with this one.Peter's desperate attachment to the key is excellently-written, as is his resentment towards his father for stranding him in a tiny Welsh town. Jen and Becky are a little less prominent, as they are not seeing the past, but Jen's unswerving assertions that Peter is lying will annoy readers. David also will initially annoy readers, because of his unwillingness to consider his children's emotions, but becomes more sympathetic toward the end of the book. The Welsh characters, with the exception of the revolting Dr. Owen, don't elicit as much reaction as the American ones, but the character of Taliesin manages to fascinate without even appearing much. He's a pervasive presence throughout the book.Fans of "The Dark is Rising" and Lloyd Alexander will thoroughly enjoy "String in the Harp," a dreamy tale of magic, myth and history.

Published by Thriftbooks.com User , 20 years ago
I recently read the book, "A String In The Harp," By Nancy Bond. I thought that it was a great book all round. The book tells the story of a family whos life has been torn apart by their Mother's death. 15 year old Jen Morgan has been left in Amherst, to continue with her high school education while her family travles to a small Welsh villege for a year while her father teaches at a univercity. Jen visets her family over Christmas vacation, and ends up staying the rest of the year, because she finds out that their is a lot going on in her family, and that it is important for them all to be together. The story folcuses on her younger brother Peter, who has found a harp key which he claims belongs to a sixth century Welsh bard. At first Jen doesn't want to believe Peter's wild stories about the key, and the power that it exerts over him, but eventually she has no choice, but to accept it's existence. On top of all this, Jen decides to learn how to keep house, and try to act as a Mother to her two younger siblings. In this book Nancy Bond does a great job of weaving the life of a school boy from Amherst, and that of a Welsh bard together, to tell an extremely suspensful, gripping story. I would reccomend this book to any one who likes a good read!

Published by Thriftbooks.com User , 21 years ago
A String In The Harp is a really good read. I am not exactly your book-worm type of gal, but I could barely take my eyes off this book. Its very creative and imaginative. A short summary of the book: The Morgan family's mom dies. They move to a foreign country leaving the oldest sister behind with relatives. The family just falls apart. When word comes that the sister (Jen) will be coming to visit, everyone hopes things will change. Jen comes and things only get worse. When Peter (the brother) finds a harp key, life changes from there. I don't want to give the ending away so you will just have to read it yourself. The book is way better than I expected, I hope you'll give it a try.

A Pleasing Twist of Modern Fantasy and a Wandering Bard

Published by Thriftbooks.com User , 21 years ago
When fourteen-year-old Jen leaves her home in Massachusetts to visit her father, brother, and sister in Wales, she never expects anything but a normal winter break from school. As it turns out, her brother Peter has become unusually moody--he misses Massachusetts, his friends, his dead mother, his "real" house, and just about anything he can think of to complain to his father about. Finally, Peter comes to Jen with some ridiculous story about an old harp's tuning key that used to belong to the bard Taliesin. He tells her that it "sings" to him (it shows him stories with harp songs about its former owner)--a story only their ten-year-old sister Becky will believe. The book goes on to tell of Taliesin's life intertwined with Peter's and Jen's own and how he comes to terms with the key itself. Besides having a terrific plot, this book relates to the reader some fantastic imagery of a tiny village in Wales. This story is, I think, a masterpiece, and one of the best books I've read is such a long time. Once in a while you find an old book on your shelf, read it, and realize that some books don't win awards for no reason. This is one of those times.
Copyright © 2020 Thriftbooks.com Terms of Use | Privacy Policy | Do Not Sell My Personal Information | Accessibility Statement
ThriftBooks® and the ThriftBooks® logo are registered trademarks of Thrift Books Global, LLC