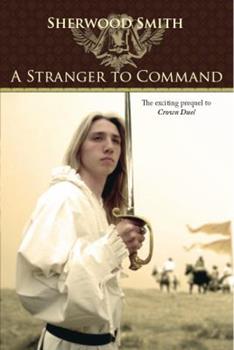 (Part of the Crown & Court Series)

A STRANGER TO COMMAND In this much-anticipated prequel to CROWN DUEL, Vidanric Renselaeus, fifteen-year-old Marquis of Shevraeth, finds himself sent across the continent to a military academy in Marloven Hess, a kingdom known for its violent history. Vidanric is used to civilized life in pleasant Remalna--except that the evidence is increasingly clear that the civilization is only on the surface. Too many young, smart heirs have suffered accidents...

Published by Thriftbooks.com User , 11 years ago
I thought that reading this would ruin Crown Duel for me since Danric was apparently in love with another girl in this book but was surprised when I found out I liked this book more than Crown Duel! The characters are much more developed and the amount of detail makes it seem so realistic! I finished reading it and then started reading it a second time! Fantastic book! I hope she come out with more books soon :D

Published by Thriftbooks.com User , 12 years ago
"Stranger to Command" is the prequel to "Crown Duel" and, in a way, a sequel to "Senrid." You don't need to have read either of these books to understand and enjoy "Stranger to Command" though some of the references will (obviously) have more meaning if you've read these books. Because of this, I'd actually recommend reading "Crown Duel" before "Stranger to Command" even though this is technically the prequel. The world-building was excellent. The clash of unique cultures--Remalna manners against Marloven Hess customs--was fun. A few details made me raise an eyebrow, like Vidanric plunging his saber into the ground almost to the hilt to clean it (not the best way to clean blood from a blade even if he somehow physically managed the feat). However, things like this only happened few times and the questionable details weren't important to the story. The characters were engaging and realistic--even Vidanric's enemies. I cared about what happened to them. The pacing and suspense were excellent, compelling me to read on to find out how the latest conflict or concern would be resolved. My one complaint is that we were only given a bare hint of what happened to Vidanric's Marloven Hess friends and charges after he returns home. He left them on the brink of war. I expect that's going to be another (not yet released) book, but I care enough about them that I want to know _now_. ;) There was a romance and some kissing in the book, but no sex. Any bad language was done with made-up phrases. Overall, I'd highly recommend this well-written, clean novel to both teens and adults. Reviewed by Debbie from Genre Reviews (genrereviews. blogspot. com)

fantasy story with a real-life feel

Published by Thriftbooks.com User , 13 years ago
Vidanric Renslaeas, Marquis of Shevraeth, otherwise known as Shevraeth, is sent from his home country of Remalna at age fifteen to train in the military academy of Marloven-Hess. If you've read Crown Duel, this is aptly named the prequel. Shevraeth is a marvelous character and I love him to death. Umm, synopsis: The tyrant on the throne of Remalna, Galdran, is making it difficult for Shevraeth to stay at home and not be killed. So while his family and friends stay and try to organize an underground rebellion (without being found and killed themselves) Shevraeth's parents send him somewhere far away where he will learn actually useful skills, like how to fight and save his life, yes? But Marloven-Hess is as far away from court life as the desert from the rainforest, so Shevraeth must learn how to get his bearings, in a new country with a new language, while the problems at home keep his mind far from content. He is a very clear-headed person, liking to think things through, and a good leader. He goes through all the normal teenage stuff too, like getting a girlfriend, but THANK GOODNESS it's not the center of the book. And while away from home he learns to command, so that maybe...[erase spoiler] Just read Crown Duel, it comes next.

a tale of culture clash, with excellent worldbuilding and characterization

Published by Thriftbooks.com User , 13 years ago
Fifteen-year-old Vidanric Renselaeus, Marquis of Shevraeth, has been sent from his home in Remalna to a military academy in Marloven Hess in order to escape political unrest at home, where the king is increasingly out of control. In Marloven Hess, Vidanric must learn and accept many new things: a new name (the Marlovens assume his title, Shevraeth, is his name), a new king (the young king Senrid), new friends and foes, and most of all, a new view of the world, as he must reconcile the seemingly civilized ways of his own country with the warlike ones of Marloven Hess. As always, the worldbuilding is excellent, and the characters are as well. I loved Vidanric's courage, intelligence, and integrity, which he retains in spite of the difficulty of adapting to his new environment. The difference between the two cultures is especially intriguing, as Vidanric finds that there might be more to be said for Marloven Hess than he originally thought.

Published by Thriftbooks.com User , 13 years ago
This prequel to Sherwood Smith's popular novel Crown Duel gives us the past of the dashing and mysterious Vidanric, Marquis of Shevraeth, who travels to Marloven Hess, a country famed for its horses and military prowess, to train in its famous military academy. The young courtier is unprepared for his harsh new life, but he grows into it admirably, becoming a true leader. The fan base for Crown Duel is probably mainly female, but boys will love this story too--Sherwood Smith's sense for military training is uncanny; you'll feel ready to take command yourself, when you've finished the book.
Copyright © 2020 Thriftbooks.com Terms of Use | Privacy Policy | Do Not Sell My Personal Information | Accessibility Statement
ThriftBooks® and the ThriftBooks® logo are registered trademarks of Thrift Books Global, LLC