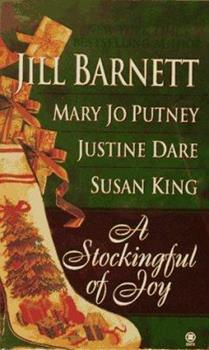 This description may be from another edition of this product. Four New York Times bestselling authors--Putney, Jill Barnett, Justine Dare, and Susan King--present a romantic quartet of stories filled with the magical spirit of Christmas and the hope and joy of...

Published by Thriftbooks.com User , 12 years ago
OH>>OH>>>Unlike up above, you gave Mary Balogh credit for Mary Jo Putney's story, and it seems the consensus is that hers was the best in the book. I have read every single book she ever wrote & would tell anyone that her books never fail to please. <br /> Susan King's "Snow Rose" was my next favorite as I love all things Scottish. It was kind of a new twist with the snow rose gem that she had received as an infant. <br /> Justine Dare's "A Light in the Window" was different from other light in the window stories that I have read because of the interesting story with the heroine caring for her sister's son. I feel that saved it from being the routine light in the window story. <br /> Jill Barnett's "Boxing Day" was right up there with Snow Rose. Jill Barnett never fails to please with her stories either. It was very nice because it made the heroine to be an independent woman which was quite rare back in those days. <br /> All in all, a Christmas book WORTH READING for anyone who likes anthologies. I personally love reading Christmas anthologies at Christmas as you can read a story and not be locked into a long book at that busy time of year.

Published by Thriftbooks.com User , 13 years ago
This book was a joy to read from start to finish. The stories span the ages - both of time and of hero/heroine combinations. I won't go into the details of each story, as that is done in other reviews. But Ms. Barnett's story of the boxer and his landlord was fun; Ms. Dare's story of the cowboy and shattered family is so very touching; Ms. Putney's story of luck and love is fun and heartwarming, and Ms. King's story from the highlands is clever and romantic. They are such a good combination - each story strong in its own way, but different than the others. I Highly recommend this to romance readers for a good Christmas tale. (*)>

All around great little stories to curl up with.

Published by Thriftbooks.com User , 15 years ago
I am not an anthology fan but I love Mary Jo Putney and Jill Barnett.I hadn't read anything by Susan King yet (although I have a few of her backlist, I'm a paperback junkie and collect and collect until I can't remember what I have!)Justine Dare was new to me. These were sweet and romantic stories, you won't be disappointed with any of them. I personally thought A Light in the Window was second best after Susan King's The Snow Rose. I just love Scottish Highland tales. The other reviewer's pretty much hit the nail on the head with the descriptions. This little book of anthologies doesn't disappoint but rather makes you want to go out and find every book these fantastic authors have ever written! See what I mean? I'm addicted! You will be too with these engaging stories of love and triumph!

One of the all around best anthologies I've ever read!

Published by Thriftbooks.com User , 23 years ago
I grabbed this one with great expectations because it contained stories by two of my favorite authors and two other authors that I hadn't read but have heard good things about. And the rare thing happened, all of my expectations were met and I discovered a new author (King) whose backlist I'm probably going to track down. The King story ["Snow Rose"] set in the Scottish Highlands is probably my favorite. I found it tender, sensual and gripping and all of the little historical details really placed me in the time period. The Barnett story ["Boxing Day" - set in Victorian New York] was my second favorite, it was funny and witty, light and really hit the spot, the hero was very lovable and the heroine was an *older* woman. The Putney story ["The Best Husband Money Can Buy" - set in Regency England] was also great about a woman who buys herself a hubby but I have to admit I was a little bothered by the fact that they were cousins (I know this was acceptable during that time but it still makes me squirm). The Dare story ["A Light in the Window" - set in late 1800s Wyoming] was good but probably my least favorite because I felt it was too short and that she wasn't given enough space to fully develop her characters. I highly recommend this anthology for those who like 'em.

Published by Thriftbooks.com User , 24 years ago
Not being a fan of anthologies BUT being a fan of Mary Jo Putney (who wrote in the anthology, not Mary Balogh) and Jill Barnett, I purchased it anyway. I could nitpick and say which stories I thought needed a longer format, but none of that really matters. It's a delightful read just as it is. Plus, I now have two new authors to look for. :>
Copyright © 2020 Thriftbooks.com Terms of Use | Privacy Policy | Do Not Sell My Personal Information | Accessibility Statement
ThriftBooks® and the ThriftBooks® logo are registered trademarks of Thrift Books Global, LLC