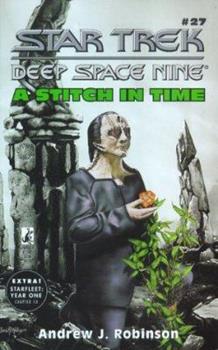 The enigmatic Garak - Cardassian-in-exile on space station Deep Space Nine - refers to himself as just a simple tailor, but everyone knows that there's more to him than that. Why was he banished from his home planet? And why does he choose exile on Deep Space Nine?

Published by Sarah , 1 year ago
Seriously. Read this. It's the best Star Trek book I've ever read, and actually one of the better books I've read in general. It's incredibly well written. I honestly finished it in about two days, I just couldn't put it down.

Published by Thriftbooks.com User , 18 years ago
A Stitch in Time, by Andrew J. Robinson...I recognized the character Garak, the Cardassian "taylor" of Deep Space Nine, from the title of the novel as much as from the cover art depicting him in a pensive mood holding an Edosian Orchid. So far as I was aware when I picked the book up, I had never heard of Andrew J. Robinson, though in fact I had... more about the author later.A Stitch in Time is set up as a sort of Barbourian diary, if you will. It begins in the present with a letter to Garak's friend, Dr. Bashir, sojourns alternately between two different points of Garak's "fateline", each progressing generally forward. Time and all its permutations is very much woven into the fabric of the book. I suspect that the title, having its base in reference to a popular saying related to tayloring, ("a stitch in time saves nine", for those who somehow missed this lesson at Gramma's knee), is also a metaphor for a short span of time... or perhaps Garak's life.During the time that the television series was still in production, Garak's past, and indeed present, were somewhat of a mystery. This novel fills in the gaps of his earlier life and gives a vivid picture of what life in a militaristic society must be like. Reading this, I was very much reminded of George Orwell's 1984, though it ends on an upnote rather than the despair of the future that permeates Orwell's novel and the outlook of his character Winston, though I suspect that if Winston were a Cardassian... well, I digress.The tone of the novel is somewhat somber, and one can easily envision "plain and simple Garak" at his keyboard in a ruined Cardassian city amid pots and sherds with orchids, sewing machines, thread, fabric, and such littered around him as he puts the final touches on his narrative and the cover letter to Dr. Bashir he is sending along with it. I found much to reflect on in this story.A Stitch in Time is currently available as an ebook or in paperback, #27 in the Star Trek Deep Space Nine series. Buy this book. It is the best Star Trek novel I have ever read, though, My Enemy, My Ally is a close second.Oh.... the author? Andrew J. Robinson? He is the actor who so brilliantly potrayed Garak on the television series where he was introduced. Very, very well done, Sir!

Andrew Robinson is the voice of Garak!

Published by Thriftbooks.com User , 22 years ago
First of all, to answer a question posed by another reviewer of this book, yes Andrew Robinson wrote this book by himself--every single word! His total mastery of the voice of Garak in print ought to be a good clue to that though. I have never read a book before where the voice of the main character seemed to speak to me from the page. This is an amazing book and a "must read" for any Star Trek fan!

Published by Thriftbooks.com User , 22 years ago
This is, I believe, the best Trek book I have read to date. The plot is relatively simple -- it fills in Garak's life before Deep Space Nine, it fills in Garak's life and feelings in the events surrounding the Cardassian invasion, and then it tells us about his efforts on the devastated planet afterwards.The beginning segment, at the school et cetera, was the closest that Star Trek has gotten to "Ender's Game." While this novel isn't that good, that was the general feeling I got as I was reading it. The characterisations were consistent and superb throughout the novel, and to differentiate between the different plotlines, the author simply uses different fonts. It was a neat effect.It is clear when reading this book that Robinson is a fledgling author. While the vocabulary is okay, the sentence structure is somewhat elementary, but this doesn't really hurt the novel, because it is a lot better than some of the drivel we've seen before when it comes to ST books.This book is written in a series of first-person entries into Garak's journal, which he has arranged into an interesting order and is sending to Dr. Bashir. Although the premise and writing are clear, the presentation was a little dissapointing. These didn't feel like journal entries; I can't picture anyone writing a journal looking like that. Still it was an interesting, sometimes thought-provoking, and always fascinating view of life through Garak's eyes. Kudos to the author for a job well done!

Published by Thriftbooks.com User , 22 years ago
WOW! What a fantastic story. Even if you are not a fan of DS9 you will enjoy this book. The character of Garak is fascinating and I really enjoyed the way the book was part journal, part correspondence and part real time. At times touching, this novel is much more than an exploration of a TV character. It is also a fascinating glimpse into a unique alien culture.

Published by Thriftbooks.com User , 22 years ago
We find out about Garak's childhood, events just before and just after "Tears of the Prophets", Garak's initiation into the Obsidian Order, Gul Dukat's first name, the real reason Dukat hates Garak so much, some "missing scenes" from "What You Leave Behind", why Garak was exiled to Terok Nor and why he stayed behind on Deep Space Nine, where his gardening skills come from, and a few months of developments on Cardassia after the end of the war... just to name a few of the more interesting bits.The book basically follows three timelines: One starts in Garak's youth, just before he goes off to join an academy, and progresses to about the middle of "Emissary". A second starts just before "Tears of the Prophets" and continues to near the end of "What You Leave Behind". The third goes from shortly after Garak's arrival on Cardassia after WYLB and shows important events in the rebuilding of the planet.This is a wonderful novel, and it is a tribute to Andrew J. Robinson's knowledge of his character, and the others in the series, that he was able to create this story without a ghostwriter or co-writer.
Trustpilot
Copyright © 2022 Thriftbooks.com Terms of Use | Privacy Policy | Do Not Sell My Personal Information | Accessibility Statement
ThriftBooks® and the ThriftBooks® logo are registered trademarks of Thrift Books Global, LLC