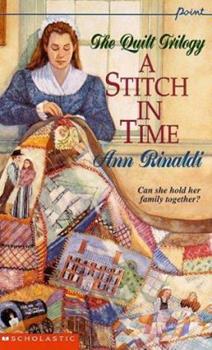 (Book #1 in the Quilt Trilogy Series)

Hannah is the strong one. The one who cares for her brothers and sisters; the one who's kept the family together. But now, everything is changing. Her father is more distant, and her siblings are starting lives of their own. That's when Hannah decides to make a quilt. A quilt of fabrics from people who are special to the family; people they trust. And when the sisters are separated, Hannah makes sure they each have a piece of the quilt. The quilt...

Published by Thriftbooks.com User , 19 years ago
This book was great! WOW! To tell you the truth, it wasn't one of the best Ann Rinaldi books I've ever read, but hey, it passes. Fifteen year-old Hannah Chelmsford has a mixed up life: a seperated family we could call it. Her father is a mean old man who won't allow either Hannah or Abby(his oldest daughters) to marry who they wish, he won't let his son Lawrence marry or paint, and his youngest son he hates beyond all things. Thankful is his favorite, and the only "perfect" Chelmsford in her father's eyes. Well, Hannah's mother is dead, and she takes it as her job to hold the family together. She even starts on a quilt with her two sisters. They each have a cloth, and patch together peices of people they love and trust in their lives. When her youngest brother, Cabot, runs off to sea, a secret about their mother is revealed, and Hannah finds her true love, Richard. Later in the story, we find out that when father, Lawrence, and Thankful were on their trip west, Thankful is taken by Indians. Read this to find out the rest...it's great!

Published by Thriftbooks.com User , 22 years ago
A Stitch in Time is about a 15-year-old girl named Hannah. She brings up her little brother and sisters ever since her mother died in the war. She tries to keep her household peaceful. She considers her father evil and greedy, and doesn't want anything bad to happen. The only person Nathanial Chelmsford ever loves is his youngest daughter, Thankful. Hannah believes that everybody she loves goes away from her. She goes from helping her sister, Abby, elope, to convincing her father to take Thankful to Ohio with him. The only way Hannah can really keep her friends and family close to her is by piecing a quilt with a little piece of fabric from everbody she trusts in it. This is a great book! I think this is the best one in the quilt trilogy.

Rinaldi at her very best!

Published by Thriftbooks.com User , 23 years ago
When I read the back of this book, I thought the publishers made it sound boring. But I bought it anyway, since I love Ann Rinaldi's books. Well, this book was totally amazing! The characters were vivid and memorable, and the action kept on coming! I finished it quickly, not being able to put it down. This book is definately way up there at the top of my list, with FINISHING BECCA and THE LAST SILK DRESS. If you like drama and historical fiction, you'll love this book. I did!

Published by Thriftbooks.com User , 23 years ago
This was such a wonderful book! It is one of thoses that you hate to put down and stay up the whole night to find out what happens! I found myself holding my breath in places, hoping that evrything would turn out alright. If you love history or just a good book, pick up this one.

I recommend you read this book!!!

Published by Thriftbooks.com User , 25 years ago
Imagine you are a 14 year old girl who has to deal with the death of your dear mother. This situation would change your life forever. Well that's what Hannah has to deal with in the story "A Stitch In Time" by Ann Rinaldi. In this story Hannah is left with all the troubles that her mother has left behind after her death. There are many family problems Hannah can't deal with such as the way Hannah's father, Nathenial has betrayed his youngest son, Cabot; and the way Abigal, the oldest of the kids, ran off to marry Nate Vudeau, who she was forbidden to see. Hannah is making a quilt to try to piece back the lives they once had that were full of joy and happiness but now are full of pain and sorrow. Ann Rinaldi is a very dramatic writer. This came through in one if the scenes where Hannah gets a letter from her sister Abigal, Hannah thought Abigal was missing out at sea. The days and nights went by and Hannah had not gotten a letter from her sister. She had this awful feeling that something terrible had happened. She cried and wondered why Abigal had to go marry some wretched sea captain. Finally on a rainy, gloomy afternoon there was a quiet knock on the door. "I have a letter for you miss." Hannah's legs grew weak; she carefully took the letter. "Thank you," she replied. She quickly read the letter. It was from Abigal saying she was on an Island and doing well. Hannah's chest felt like an enormous weight had been lifted off off. If you enjoy a dash of History, and cups of drama; if you like books you can't put down...I recommend you should read "A Stitch In Time. You will love it!
Trustpilot
Copyright © 2022 Thriftbooks.com Terms of Use | Privacy Policy | Do Not Sell My Personal Information | Cookie Preferences | Accessibility Statement
ThriftBooks® and the ThriftBooks® logo are registered trademarks of Thrift Books Global, LLC