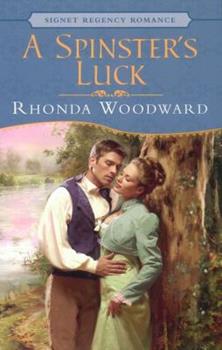 Celia Langston has resigned herself to the role of a spinster governess. Her employer, the duke, has never considered a lass below his station, let alone one past her prime. But when he finds that Celia looks down on him, the duke must ready himself for a long (and merry) chase.

Published by Thriftbooks.com User , 15 years ago
Celia is no ordinary governess, she has been one since she was sixteen. Being an orphan she was kindly left in the care of her parent's employers to be her guardian, but leaving her with no inheritance. Because of the nature of her becoming a governess, she is more of a friend than an employee to her employer (The Duke's sister) She also befriends an eccentric neighborhood old woman (like her mother did before her) and the old hag grows rather fond of Celia and ends up leaving her a grand ol' inheritance. So now Celia with her new found wealth starts to dress like she looks, beautiful and graceful. The Duke who really never entertained thoughts of this young lovely lady (partly because she was a child when she first became his nephew's governess and because she always avoided him) doesn't understand now why he cannot stop thinking about her, but she has made it clear she wants nothing to do with him. She is still holding on to something the Duke said about her many years ago when she was still a child and he just has no clue....... Another great read by Ms Woodward. This story is very believable, the characters are so graceful and likeable and completely realistic in their flaws. Great two hour read (the book is that good)

Published by Thriftbooks.com User , 16 years ago
What a lovely romance with likeable characters. Celia Langston, an orphaned vicar's daughter has lived with the Duchess of Harbrooke (Imogene) for over ten years. She is a friend and companion to Imogene and a governess to the young widow's sons. Celia also has a special friend in the eccentric Edna Forbisher, a recluse who lives nearby. The only thing that spoils this idyllic life for Celia is Imogene's brother the Duke of Severly (Drake). When Celia was sixteen, she overheard Drake telling Imogene that she was too young to care for children. Where would she go if Imogene insisted she leave!!! But Imogene would not back down and the Duke decided to bide his time and just watch over the situation. When the Duke of Severn made his infrequent visits over the years, Celia made sure she was never in the same room and she harbored the hurt and anger about the overheard conversation. When the Duke and a friend visit, Celia is forced into his company. Drake notices her dislike for him and tries to draw her out. Celia and Drake learn to hide their hearts, because during the course of Drake's stay at Harbrooke and a subsequent trip to London, they fall in love. Celia thinks that Drake is a faithless rake, and then thinks he's in love with another. Celia inherits some money and property from Edna and Imogene presents her to society, hiding the fact that she has been paid companion and governess. Gossip and snotty interference from Drake's jealous mistress turns that stay in London painful and after a bitter argument with him, Celia returns to the country. How can all the misunderstandings be resolved? A bolt of blue-green velvet fabric smooths the way for Celia and Drake to express their pent up feelings of love for each other. I liked the flow of this story from country to city. The characters are well fleshed out. This is not a "deep" emotional book but I liked that the trauma was mild. Imogene finds romance along the way too making this pleasant, happy and recommended reading.

Loved it! Loved it!

Published by Thriftbooks.com User , 19 years ago
Celia Langston was a sixteen-year-old orphan. Her father had been the vicar of Harford, so she was considered to be well-bred. She took a position of governess, offered to her by Imogene. But Imy's husband, Philip, had died and left Imogene's brother, Drake (the Duke of Severly), half guardianship of their two sons. Drake did not feel Celia to be up to the task of caring for the boys. However, he would give her a chance. If she proved able to care for Henry and Peter, she could keep the position. Ten years later, 1816 Celly had always been intimidated by Drake and avoided him whenever he visited Harbrooke Hall (in Kent). This time, however, Drake would be staying for quite awhile. Celia could not avoid him all the time. She tried though. Drake saw Celia with different eyes this time. She was lovely. It was obvious how much his mother, Imogene, and the boys governess, except that she seemed to go out of her way to avoid seeing him. The chase began ... Major David Rotham was Drake's close friend from the military. When David came back from Scotland, Drake invited him. A romance began to bloom between him and Imogene. ***** That is as much as I can tell without giving anything vital away. I found the story so well done that I read the entire book in one afternoon! Then I went to several on-line book stores to purchase he previous releases. Unfortunately, it looks as though this is Rhonda Woodward's first novel to be published! I have found myself a wonderful new author to keep an eye on here. If Signet is wise, they will get a long-term contract on this author - FAST! ***** Reviewed by Detra Fitch.

Interesting characters in a regency with a twist!

Published by Thriftbooks.com User , 19 years ago
I really enjoyed the characters in this story. This new author provided a good plot with a different twist to the governess meets powerful guy story! I found the book held my interest and I look forward to reading more from Ms. Woodward. I always like to see local authors in the bookstore.

An enjoyable read from a great new author

Published by Thriftbooks.com User , 19 years ago
This character driven story provided me with a pleasant escape from the holiday rush! I needed a break from all the pressure I was feeling and when I found this book I planned to sit down and read a few chapters. Several hours later I found myself reading the last chapter and feeling sorry that I was coming to the end of my afternoon escape! I thoroughly enjoyed the main characters, Celia Langston and the Duke of Severly, and the series of events that eventually brought them together. I also enjoyed the secondary plot line revolving around the budding romance of Drake's sister, Imogene, and his close friend, Major David Rotham. Several unexpected plot twists were very satisfying to this reader, and I found "A Spinster's Luck" utterly charming. I look forward to more from this author whose characters kept me enthralled through the entire book. It was great to find a new author with a unique outlook on the Regency genre.
Copyright © 2022 Thriftbooks.com Terms of Use | Privacy Policy | Do Not Sell My Personal Information | Accessibility Statement
ThriftBooks® and the ThriftBooks® logo are registered trademarks of Thrift Books Global, LLC