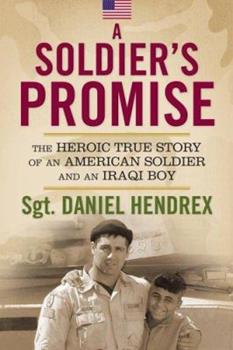 A Soldier's Promise: The Heroic True Story of an American Soldier and an Iraqi Boy

An uplifting story of unlikely friendship and hope during the Iraq War. After the overthrow of Saddam Hussein, First Sergeant Daniel Hendrex was dispatched along with his unit, Dragon Company, to... This description may be from another edition of this product.

Published by Thriftbooks.com User , 15 years ago
A Soldier's Promise is a book that changes perceptions. This is one of my favorite books. When I first started to read it, I put it down and did something else. A few months later I desided to read something and came across it. I had forgotten about it. I started to read where I left off. Once I got into the story, it was very hard for me to set the book back down. It kept me wanting to know more. It was so good I wish it was longer because when I finished I just wanted to keep reading. I didn't want the story to end. This is on my top 3 favorite books list. I strongly urge you to read this book. Don't give up on it just because the very beginning doesn't grab you. Keep on reading. You'll be glad you did.

Published by Thriftbooks.com User , 15 years ago
I served in iraq from April-August 2003 and highly recommend this book to anyone looking to gain a better understanding of what we faced in iraq during that time. Although I was not involved with the unit detailed in the book, many of the same circumstances applied to what we faced. This book focuses on what really goes on in iraq on a daily basis. It has no political affiliation or opinions towards the war. Great read, highly recommend

Published by Thriftbooks.com User , 16 years ago
This is one of the best books I have read this year.You get a feel what works and does not work in Iraq,what the enemy is like,and then as a bonus you meet a young lad that is brave beyond words.The effort of this soldier and his comrades both soldiers and marines to do the right thing makes you proud to have worn the same uniform. R.E. Dunning CWO 4 USA Retired Marge Dunning T/SGT USAF Retired

Is This The World's Best Book?

Published by Thriftbooks.com User , 16 years ago
Ok, maybe it isn't The World's Best Book. But it is sure enough at the very tiptop of its genre. Others including Editorial Reviews have summarized this book well, but..career enlisted man goes to Syria/Iraq border town post-fall of Saddam and tells what happens as foreign fighters and money flooded into the country to further destabilize it. Meanwhile, an Iraqi kid's unbelievably brutal father, ex-major in Saddam's army, becomes a terrorist/insurgent, organizes cells to kill Americans, takes the son to cell meetings and forces him to participate in ambushes. The kid repeatedly tries to escape (to Syria,relatives in Bagdad, etc.) but is caught and threatened with death. His only way out is to join the Americans..and he does. But he is found out, and soon every terrorist in the province is after him, his mother and his little brothers. This is an astounding book, plainly written, of war and great humor and love and fear and tension. Many quirky things you won't see in the media add to the book. Example: terrorists wrapped morters in copper wire; as their rockets always missed, they thought the American had a "force field" shielding them,and that this would bypass the force field.Or the Insurgents first thought when the US started firing back at them, they were Polish troops, as they felt the Americans wouldn't fight back with such violence. Lots of men-at-war humor, too. Not political at all; I don't believe the name of any elected or appointed official is even mentioned. Told totally from an enlisted man's perspective. Buy this book. You will never forget First Sergeant, Steve-O, and A Soldier's Promise. And you WILL re-read this book, and recommend it to others.

This is a great American Story

Published by Thriftbooks.com User , 16 years ago
My superintendent at work told me about this book that he is mentioned in a few times. I have really enjoyed reading this one. I don't particularly get into military stories but I made and exception and I'am glad I did. This boy had great courage and came to Americans for protection, and I take pride that we were able to.
Trustpilot
Copyright © 2022 Thriftbooks.com Terms of Use | Privacy Policy | Do Not Sell My Personal Information | Cookie Preferences | Accessibility Statement
ThriftBooks® and the ThriftBooks® logo are registered trademarks of Thrift Books Global, LLC