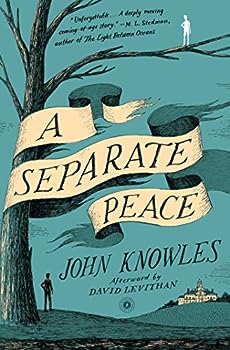 This description may be from another edition of this product. An American classic and great bestseller for over thirty years, A Separate Peace is timeless in its description of adolescence during a period when the entire country was losing its innocence to World...

Very upset about the condition, but very happy with the customer service!

Published by Mandy E , 2 years ago
I am really upset about this purchase. I know it’s not a lot of money, but I purchased a like new book and there is writing on every page, underlining, drawings, along with highlighting. I can not read this without getting distracted. I was so excited to read this book again, as the first time was in high school and I really enjoyed it. The customer service is great- my money was refunded quickly and I like that they asked for me to donate the book instead of returning it.
Published by Patricia Baker , 4 years ago
I had this long ago, gave it to a friend. This book could be read and written about in a composition. A book about humanity always sells. This is why I purchased it again.

Published by Thriftbooks.com User , 17 years ago
A separate peace, written by John Knowles, is set in a boarding school in New Hampshire during World War II. This book is a remarkable novel mainly about a unique friendship between the two main characters, Gene and Phineas. Gene is a shy, reserved intellectual, while Phineas is an outgoing, lively athlete. However the disparity between their personalities has a mysterious force that pulls them together. The friendship portrayed by Knowles is amazingly real- they waiver between hate and friends as mini-conflicts arise between them. The campus of this school was situated out of the reaches of the war; most of the students are not bothered by what¡¦s happening in the outside world. However, as the students neared graduation and the truth slowly unveiled itself, it shattered the tranquility within the campus, and the students were suddenly faced with the shocking reality. A seemingly small incident had progressed into a huge conflict that ultimately was entirely comprised of evil. This book is well designed and controlled. At critical times in the story, Knowles is careful not to reveal too much, which leaves the reader in suspense with the urge to read on. In my opinion, there isn¡¦t a definite plot (not saying it¡¦s a flaw of the book). In fact, the novel is written somewhat like a diary. Even so, Knowles¡¦ perspective towards the war is timeless, and his masterpiece would appeal to most people who read this touching story.

Published by Thriftbooks.com User , 21 years ago
A Separate Peace by John Knowles is a classic about two friends, Finny and Gene, who live at a boarding school during World War II. An instant classic, John Knowles takes the reader into a place that few have been to, inside the mind of an insecure adolescent, and lets the reader experience emotions that s/he might not in their day to day lives. A Separate Peace also explores how the common insecurities of a person might send him or her into a pit of evil that s/he might never recover from. Using well-developed characters and a plot that most anybody can relate to in some way, John Knowles makes A Separate Peace a novel that everybody should read. Normally, I won't go near a book if there isn't some sort of war or mass violence throughout the book. So when told to read A Separate Peace as an assignment, I was naturally reluctant to do so. I did enjoy reading this novel, once I got into it, despite the fact that it started off fairly slowly and there were points where putting it down was like relieving myself of a heavy weight on my shoulders. I soon realized that all of the boring and seemingly useless descriptions actually played a major role as the plot progressed and could not be ignored. Living at boarding school, I can personally relate to some of the emotions Gene feels through the book. After a while, I could not put the book down at all, and finished reading far ahead of when I was assigned to be finished reading. I do intend to go back and read this again when I have the time. A perfect novel for rainy days, summer nights or just when one has the free time, A Separate Peace by John Knowles is a classic for generations to come.

A Separate Peace Mentions in Our Blog