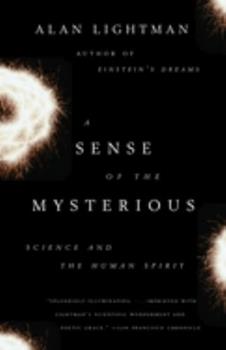 A Sense of the Mysterious: Science and the Human Spirit

From the bestselling author of Einstein's Dreams comes this lyrical and insightful collection of science writing that delves into the mysteries of the scientific process--physics, astronomy, mathamatics--and exposes its beauty and intrigue. In these brilliant essays, Lightman explores the emotional life of science, the power of imagination, the creative moment, and the alternate ways in which scientists and humanists think about the world. Along the...

Lightman is superb in "A Sense of the Mysterious"

Published by Thriftbooks.com User , 11 years ago
We have been blessed by writings like "A Mathematician's Apology" by G. H. Hardy and "On Being the Right Size" by J. B. S. Haldane, now we have a newer addition to this fine category of literature.

Fun reading for physics enthusiasts who can also appreciate the humanities

Published by Thriftbooks.com User , 15 years ago
Alan Lightman is one of those rare individuals who has a solid background in both physics and the humanities. As a result, he has been able to write this very enjoyable collection of essays dealing with the human context of science, especially physics. None of the essays are ultra profound, but they're still insightful enough to make worthwhile reading, especially considering that the amount of literature in this genre is fairly limited. This book reminds me of "Feynman's Rainbow" by Leonard Mlodinow, which I also found to be very enjoyable and, like Mlodinow's book, Lightman's book is a quick read. As other reviewers have noted, the specific essay topics are a mixed bag including autobiography, biography, the relationship between math and physics, the nature and experience of scientific inquiry, and other broader topics such as the influence of technology in human life. As indicated in my title, if you have at least a popular-level familiarity with modern physics, and can also appreciate the humanities, I predict that you will find this book to be quite enjoyable, and perhaps also somewhat enlightening. I enjoyed reading the book, and I expect that I will read it again in the future.

Published by Thriftbooks.com User , 15 years ago
This clearly and at times beautifully written work often takes on the character of intellectual autobiography. Lightman tells of his youthful enthusiasm for Science, his work under his mentors William Gerace, Robert Naumann, Martin Rees, and Kip Thorne. He writes about the process of work in science in fascinating intellectual portraits of Einstein, Feynmann, Teller and the astronomer Vera Rubin. He extends the analysis in writing about the way Metaphor can be vital in scientific discovery and explanation. He writes a chapter on how 'Words' in Science provide clear 'naming'( denotative meaning) while in Literature they are more hidden and multiple( Connotative meaning) He in one startling chapter tells how at the age of thirty- five he realized that his best scientific work was behind him, and followed his youthful plan to become a writer-novelist. In this chapter he contrasts the often frustrating , difficult problem of solving scientific problems with the day-to-day seemingly simpler satisfaction of the novelist. And here he indicates that nothing can quite compete with the creative joy of answering a scientific question definitely and precisely- and in so doing knowing one has an answer which is universal. And this in comparison to the always somewhat unclear result of one's own literary efforts. Lightman's love for science and his genuine interest in the work of others, and their personal struggle give this book an extra dimension of intensity in feeling. His excitement and enthusiasm with creative work is best indicated in the chapter which gives its title to the work. He cites Einstein," The most beautiful experience we can have is the mysterious.It is the fundamental emotion which stands at the cradle of true art and true science" Lightman then provides his understanding of Einstein's words. " I don't think he meant that science is full of unpredictable or unknowable supernatural forces.I believe that he meant a sense of awe, a sense that there are things larger than us, that we do not have all the answers at this moment. A sense that we can stand right at the edge between known and unknown and gaze into that cavern and be exhilirated rather than frightened. Now he adds his own autobiographical confession. " Just as Einstein suggested I have experienced that beautiful mystery both as a scientist and as a novelist. As a physicist, in the infinite mystery ofphysical nature.As a novelist , in the infinite mystery of human nature and the power of words to portray some of that mystery." An exhilirating work.

Published by Thriftbooks.com User , 15 years ago
Comprised of essays from different years, this is an excellent book for those about to embark on studies in the sciences, or for those who like finding out what drives people to do what they do. The writings fall into two categories: the autobiographical pieces where Lightman tells us about how and why he became a physicist then novelist, and the others, which are essentially short bios of different figures in the sciences, like Einstein or Richard Feynman. I enjoyed the former more, mostly because the reader feels close to the author's enthusiasm, his sense of discovery and enlightenment. The distinctions Lightman makes between the Arts and the Sciences are also revealing, especially in discussions of the individual and of `naming'. This book is highly recommended.

Words to Describe a Sense of Awe

Published by Thriftbooks.com User , 16 years ago
Physics at the edge of the known is indeed mysterious, but filled with a magesty that the outsider can only imagine by relating it to something in their life. I remember talking to an English Lit professor about the first time he was introduced to Mozart. He asked me when I first heard Mozart and how thrilled I was. Unfortunately I'm basically tone deaf and neither Mozart or the others give me thrills. But then I tried to explain to him the way I felt when I first discovered calculus. Mere words failed me. Dr. Lightman is much better with words than I am. He is able to convey the sense of awe, even astonishment when something is finally understood. And the more you know about advanced physics the more mysterious it becomes. This is not a book of physics, this is a book of awe. Beautiful writing.
Copyright © 2020 Thriftbooks.com Terms of Use | Privacy Policy | Do Not Sell My Personal Information | Accessibility Statement
ThriftBooks® and the ThriftBooks® logo are registered trademarks of Thrift Books Global, LLC