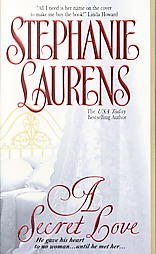 (Book #5 in the Cynster Series)

This description may be from another edition of this product. And now, Stephanie Laurens has created her boldest Cynster yet - Gabriel - a man who has known the pleasure of many women, but who has given his heart to no one. She was desperate for his help... When...

A cat brushed backwards or a love for all time?

Published by Thriftbooks.com User , 16 years ago
That is what Gabriel Cynster and Lady Alathea Morwellan must decide... Gabriel Cynster- the 5th member of the Bar Cynster to meet Fate's choice for a wife- sits on the steps to St. George's waiting for a rendezvous with a mysterious woman. Little does he know that the woman is his life long neighbor, Alathea Morwellan. She approaches him incognito to obtain his help in saving her family from certain financial ruin. Why the costume? Because ever since they were children, Gabriel and Alathea have had a deep and unending antipathy for eachother's company. But when Gabriel takes a "reward" (a kiss, of course) for his efforts in helping the mysterious veiled countess, neither is prepared for the lightening bolt of sensual tension that stuns them. Entwined in the story of financial blackmail is one of the sweetest love stories I have ever read. Do not miss the fun as Alathea and Gabriel discover that sometimes the greatest love is in your backyard. There are two scenes where my breath stops everytime I read this (and I've read it many times!). I won't tell you what they are, it would ruin it. Stephanie Laurens is a master at capturing sexual tension between her main characters. Her explicit, steamy scenes are not for the more modest reader. But they are fantastic for someone looking for a hot afternoon read. This is my favorite book from Stephanie Laurens. For me it has the perfect mix of romance, danger and sensual tension. Pick it up today!

Published by Thriftbooks.com User , 20 years ago
There's nothing like discovering a new author you love and settling in to read the backlist. Stephanie Laurens is my new favorite, and I am having a great time reading all the Bar Cynster novels. These are the best Regency romances I've read in years. Don't worry about reading them in order. Other Cynsters make enough of an appearance to whet your appetite for more but not so much as to reveal the plots of the books you haven't read."A Secret Love" is the fifth in the series, and it is Gabriel's story. Althea Morwellan, Gabriel's childhood friend, is in dire financial straights and deperately needs his help. For a variety of reasons, she doesn't want to come right out and ask for his assistance; instead, she creates "the Countess", a mysterious figure deliberately designed to entice Gabriel. Now this next part requires a certain suspension of disbelief. Gabriel and the Countess, aka Althea, have some very steamy encounters, but Gabriel doesn't figure out that the two are one and the same. I, too, didn't buy it, but if you're willing to believe that Regency England was awash with gorgeous, sensitive, masculine, sexy men, you can probably live with this plot device. It leads to a very sweet story about two people finding love where they least expected it. Because of their shared history, there's a certain depth to Gabriel and Althea's romance that is quite appealing. Additonally, the story benefited from the fact that the characters were full-grown adults (32 and 33 years old) and approximately the same age. I really get tired of spunky, independent 18 year old virgins and jaded older males. All in all, this is a great regency romance and you'll have a great time reading it!

Published by Thriftbooks.com User , 21 years ago
It is Gabriel Cyster's time to shine and boy does he!! With each of her books in this series about the Cynster men, the romances become more romantic and the sensuality-well, that definitely increases also. Gabriel is bored, marriage shy and definitely( by regency romance standards) a Rake of the first order. He is also very family oriented and as in all the preceding novels, a Cynster who does not fail to seek out injustice. There is no regency romance fan who will not find this book worth the read. I sat down and could not put it down until the mysteries were resolved and a satisfactory result obtained. It is definitely up to Laurens best and I truly believe even better than the four preceding it. I can hardly wait for number 6.

Published by Thriftbooks.com User , 21 years ago
Lady Alathea Morwellan and Rupert 'Gabriel' Cynster have known each other since they were in the cradle. They grew up together, fought together, and generally gotten on each others' nerves. Neither ever understood the tension that stood between them, it was alway just 'there'!When Alathea discoverd that her father may have been taken into a fraudulent scheme that could cause her family to lose their title, home and fortune, she knew of only one man who can help them. But how to ask Gabriel for his help when they can't even be in the same room together without wanting to tear each other up! She devises a disquise and enlists his help to uncover the people behind the scheme, he dosen't know who she is, only that Gabriel feels compelled to help the 'countess' any way he can. His only payment that he asks is a kiss for each bit of information he uncovers. As the case progresses so does their passion. Still not knowing her true identity, Gabriel wants her in the ultimate way, knowing that the tension between them can't go on forever. Alathea knows that she's playing with fire and he will eventually find out who she really is, but his kisses and seduction are too strong for her to pull away. What will he do when he finally realizes that it's her, his childhood nemesis; the thorn in his side, the one person in the whole world that he would never get involved with? The Cynster motto "To Have And To Hold" will ring true, beacuse Gabriel won't let go until he makes her his, no matter her indentity, no matter the cost.If you have read the other 'Bar Cynster' stories, you won't be disappointed with this next one in the series. It has all the excitement and sensual tension that you have come to expect from one of the Cynster men.Stephanie Laurens writes with feeling, sensuality, and wit. All of her characters are well written and fully developed.If her name is on the cover, you'll never be disappointed!

Published by Thriftbooks.com User , 21 years ago
In 1820, the promissory note shook Alathea Morwellan to the bone. Apparently, her business-dumb father, the Earl of Meredith agreed to remit an amount worth more than his earldom for a percentage of the profits garnered by the Central East Africa Gold Company. Having been the brains behind the success of the earldom for the past eleven years, Alathea refuses to idly await disaster on something that smells of fraud.Alathea decides to wear a veil to hide her identity and obtain help from someone she can trust to remain discreet in case he learns who she is. She turns to her childhood foe Gabriel Cynster, who has a reputation of assisting ladies in trouble for a price. Gabriel charges her with a kiss every time he assists her. As he works to uncover the identity of the con artist(s), Gabriel and Alathea find their kisses turning more passionate each time. Love begins to blossom, even as he tries to uncover the identity of the woman he now plans to marry.A SECRET LOVE is an entertaining Regency romance that will thrill sub-genre fans due to its competent and ardent lead protagonists. The extended families of the two stars magnify the story line by providing depth to plot and to the protagonists. Stephanie Laurens' fifth Cynster tale is another triumph in a series that shows why the era is so cherished by readers.Harriet Klausner
Copyright © 2020 Thriftbooks.com Terms of Use | Privacy Policy | Do Not Sell My Personal Information | Accessibility Statement
ThriftBooks® and the ThriftBooks® logo are registered trademarks of Thrift Books Global, LLC