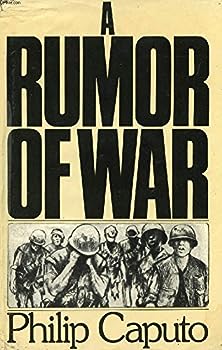 A Rumor of War

The classic Vietnam memoir, as relevant today as it was almost thirty years ago. In March of 1965, Marine Lieutenent Philip J. Caputo landed at Da Nang with the first ground combat unit deployed to Vietnam. Sixteen months later, having served on the line in one of modern history's ugliest wars, he returned home-- physically whole but emotionally wasted, his youthful idealism forever gone. "A Rumor of War" is more than one soldier's story. Upon its...

Published by Thriftbooks.com User , 21 years ago
For anyone who has ever asked, "What was Vietnam really like," Marine Lieutenant Philip Caputo's book, "A Rumor of War," is a must read. In this autobiographical account of his time as an infantry officer in, "the `Nam," he describes the experience in authoritative terms enhanced by collegiate English studies and time spent as a combat journalist. The result is the most well written account of life in an infantry platoon in Vietnam that I have ever read.Phil Caputo could have been virtually anyone in America in the early `60's. A young, idealistic, all-American boy who joined the Marines in search of adventure, and out of a patriotic desire to answer John Kennedy's challenge to, "Ask not what your country can do for you. . ." He and his platoon marched off to war to find glory and honor. What they found was, "death, death, death."Caputo takes you into the muddy foxhole with him, making you feel the heat and annoyance of the ever-present insects, and the sniper shots that all united to deprive you of the precious commodity of sleep. He takes you on patrol with them down, "Purple Heart Trail," where the main enemies were the heat, the insects, and endless mines and booby traps. The reader can feel the rage of the infantrymen who fought endless battles with an enemy that was everywhere, yet nowhere. Gradually enthusiasm turned to pessimism; pessimism to despair; and despair to rage; rage that ultimately vented itself in mindless violence against anything Vietnamese. They were then left with the heat, the insects, and guilt borne of actions taken that they would never have dreamed of a few short months before.Caputo and his enthusiastic, young, Marines could have been anyone who has ever fought: the patriots at Lexington and Concord, who later found themselves half starved and freezing at Valley Forge; or any number of Union or Confederate soldiers from Bull Run to Appomattox. They could have been "Doughboys" who went, "Over There," to "Make the World Safe for Democracy," only to find themselves "fighting" immersion foot and mustard gas in the trenches of France; or perhaps even soldiers serving under, "Ol' Blood and Guts" himself, George S. Patton; "Our blood, his guts," as the GI's said. Their stories all verify Gen. Robert E. Lee's famous quote: "War seldom avails anything to those unfortunate enough to have to fight it."A Rumor of War ranks up there with Gen. Harold Moore's, "We Were Soldiers Once and Young," and Col. David Hackworth's, "About Face." All three show how debates that raged in Washington, Paris, Saigon, and Hanoi were ultimately scored. Whether you were a "hawk or a dove," a liberal or a conservative, a professor or student, you will benefit from reading this book that answers the question authoritatively: "Hey! What was Vietnam really like?"

Put It On Your Bookshelf!

Published by Thriftbooks.com User , 21 years ago
"A Rumor of War" is a darkly disturbing book. It is set in what was the early, "optimistic" Vietnam in the spring of '65 when we thought we were fighting for "freedom" and before the reality of the place hit home. Vietnam hits Lieutenant Caputo very quickly, as it must have for all Marine Corps platoon leaders. It's all right there-booby traps, mines, trip wires, leeches, foot blisters, jungle rot, constant shelling, dysentery, pigs eating corpses and cold C Rations. As a Vietnam vet, I was surprised the author never mentions RATS!, but we both know they were there too. (THEY were everywhere). Lt. Caputo's transfer to a staff job is worse than the field, so he transfers back to the bush as a platoon leader.It's more of the same-patrolling and repatrolling the same trails, the same hills, the same villes. All watched over by unsupportive and bureaucratic commanders. "RW" offers yet another look at the Vietnam War, one more pessimistic than most because so many of us felt that the years of '65 and '66 were more positive than this. I might suggest reading Joseph Owen's "Colder Than Hell" to compare the Marine experience in Korea with Lt. Caputo's. Reading the late Bernard Fall's "Street Without Joy" will make us aware, again, that perhaps there was never a time to be optimistic about Vietnam. I must admit that I constantly found myself curious as to how I would have handled many situations in "RW". How would I have measured up? What would I have done? How would the men have judged me? While the story of "RW" tends to stray at times, I found no fault since the author is relating a painful part of his past. One small point: "RW" would benefit from better maps-these are so often lacking in military books. The bottom line:"A Rumor of War" belongs on the bookshelf of any serious military book reader or anyone searching for yet another angle to the frustrating Vietnam War that affected so many of us.

"WAR IS HELL," and you are right there!

Published by Thriftbooks.com User , 22 years ago
To anyone who thinks of war as a glorious enterprise or some kind of Nintendo game, they should read Caputo's book. THe author himself was once an idealistic, glory seeking young man eager to participate in "a splendid little war,' but by book's end he has become an unfeeling, unremorseful and scared shell of a human being. THis may have been what kept him alive, but Caputo is angry over the deep emotional damage done to many men like himself who were thrust into a civil war and cultural revolution in a country and place we had little understanding of. Caputo manges to show us how this transformation took place. Its not a pleasant read or ride, but in the process we discover why the war was unwinnable at a price America was willing or should have paid, and what damage we inflicted on men like Caputo in putting them in such a difficult position. BUt don't read the book for any lengthy history or diatribe on Vietnam or America's policies toward it. First and foremost its a memoir of war and preparing for war. From boot camp thru training, to Vietnam and back home, Caputo keeps you riveted with descriptions of crawling through leech filled swamps, nights in the sticky jungle being consumed by insects, and witnessing the irony of pigs eating charred human corpses. When not focusing on battles, we are privy to the insanity of body counts and body bags and the tense downtime between jungle patrols, as well as the dynamics of a Marine platoon. Caputo's insights and ability to reflect back upon the events and physical and emotional carnage he inflicted upon himself and others is what makes this memoir special. There is also no small irony that Caputo was part of the first marine unit to go to Nam, and that as a journalist some 10 years later, he was one of the last to leave. Anytime I think of war as a glorious enterprise, I need only pick up this book and read a few sections. Should be required reading in war history courses! If you liked Dispatches by Michael Herr, this book is even better.

Should be a mandatory reading in every high school

Published by Thriftbooks.com User , 22 years ago
Caputo describes "the splendid little war" as his road from an enthusiastic idealist poisoned by the romanticized view of war as a chivalrous and noble enterprise to the dehumanized and desensitized wreck that he becomes during his tour in Vietnam. The book is an amazing testimony about the true nature of war with all its atrocities and horrors. Caputo brilliantly captures the endless despair of being strained in the jungle with no clear reason for being there, the hopeless madness of chasing the guerillas and the agony of loosing friends. But the most important aspect of this book is that it shows how a normal mentally healthy person can be turned into a thoughtless killing machine in the course of a few months, fast on the trigger, without any remorse for his victims. Caputo uses very strong and vivid images such as "pigs eating napalm-charred human corpses" to force the reader into his story and feel what Caputo has felt. Very realistic book that cannot leave you indifferent, definitely up there with Remarque's "All quiet on the Western front." If you want to know what fighting the Vietnam War was really like, I can't imagine how any book can possibly be better than Rumor of War.

phillip caputo puts you in the jungle and the battle !

Published by Thriftbooks.com User , 23 years ago
if you were fortunate enough to miss the horror of the vietnam war but always wondered what it was truly like, then phillip caputo puts you there. he makes you experience the war with all of your senses. i spend very little time reading but was unable to let this book set for more than a few hours at a time, if you only read one book about vietnam, do yourself a favor and read this one, you wont be disappointed, i have a new found respect for our vietnam vets after reading this book.
Trustpilot
Copyright © 2022 Thriftbooks.com Terms of Use | Privacy Policy | Do Not Sell or Share My Personal Information | Accessibility Statement
ThriftBooks® and the ThriftBooks® logo are registered trademarks of Thrift Books Global, LLC