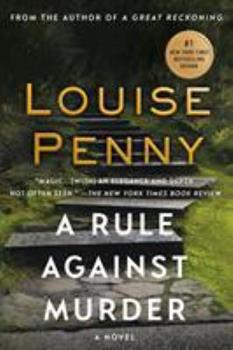 A Rule Against Murder: A Chief Inspector Gamache Novel

"What happened here last night isn't allowed," said Madame Dubois. It was such an extraordinary thing to say it stopped the ravenous Inspector Beauvoir from taking another bite of his roast beef on baguette. "You have a rule against murder?" he asked. "I do. When my husband and I bought the Bellechasse we made a pact....Everything that stepped foot on this land would be safe." It is the height of summer, and Armand and Reine-Marie Gamache are celebrating...

Book in Terrible Condition- review on condition not content of story

Published by PHD Chemist , 1 year ago
Will be reading soon, but will be buying another copy to read. The copy I received was in horrible condition. The edges were frailed with cardboard showing; the spine was broken and hanging on by open webbing; spine not totally connected, etc. All pages were intact but coffee or other stains on pages, although no words obliterated. Was an ex library copy and had a plastic cover attached and on inside of the cover had stains almost looked like mold. I will not be using - very disappointed in condition.

Inspector Gamache Novels are the best!

Published by Thriftbooks.com User , 11 years ago
Ms. Penny has a winner of a series in my opinon. Three Pines is a most intriguing village in Canada. With vibrant characters and the multilayer plots of thier lives intermingling with the main murder makes these novels quite interesting and "meaty" to read. Inspector Gamache is a noble character, while I enjoy him immensely he does have faults and that makes him more interseting and yes, likeable. This murder mystery continues the plot line of Gamache's problems with the Suriete as well.

The 4th Entry of the Three Pines Series

Published by Thriftbooks.com User , 12 years ago
I have read with pleasure this latest book featuring Armand Gamache and his team. I think the series improves with each novel because of the added details in the lives of the established characters. It has been good to have a change of venue but I do hope some more will be set in Three Pines because of the characters and the atmosphere of that isolated town. I highly recommend this book but would suggest that readers start with the first title in the series "A Still Life" and work their way to this book.

Gamache and the Family Stone

Published by Thriftbooks.com User , 12 years ago
Rule Against Murder is yet another tremendous novel from Louise Penny. I thought maybe I would not like the book as much if it did not take place in Three Pines since the Three Pines setting and all the residents were a big part of the reason I loved the first books so much. There was no reason to worry, this book surpassed all of my expectations. The family that the Gamaches encounter on their vacation is dysfunctional to say the least. Every family member was complex and interesting and could have made for an entire novel on their own. We also learn a lot more about one of the Three Pines residents and what we learn is dark and disappointing, but also enlightening. There is so much going on in this mystery, every character has their own secrets and history and all of these backstories set up the main mystery, the murder. Louise Penny makes every sentence count. When the murderer was revealed at the end, I went back and re-read parts of the book since so many of the clues were so subtle and clever that I missed them the first time around. I still can't figure out Bean! Armand is one of my favorites characters of all time. Louise Penny has become one of my favorite writers of all time. This series is so unique, I hope she continues writing it for many years to come. I will certainly keep reading.

Double mystery -- both who did it and how

Published by Thriftbooks.com User , 12 years ago
I'm a big fan of this series, ordering new releases as soon as they're announced. When this one came in, I stopped reading another book so I could get to it right away. Penny created an outstanding double mystery here. The first, who did it, was not clear to me until near the end. There were certainly a wide range of candidates, though. When the mystery was summed up in the final pages, it's clear that there were plenty of good clues scattered here and there. Then, of course, there was the second mystery. How was this murder accomplished? The method of death seems impossible for one, or even a few people to arrange. At times, it seemed as if the murderer employed magic. However, like any good magic trick, the impossible becomes simple once the secret is known. This secret, too, is explained, and its knowledge is woven into the fabric of the story. If there were separate scores for plotting and for character development, I'd give both categories 5+. As it is, we'll have to just settle for a single 5-star rating. Congratulations to Ms. Penny on an outstanding work.

Published by Thriftbooks.com User , 12 years ago
Every summer the Gamache's go on vacation together. This year they stay at the luxurious Manoir Bellechasse in Quebec. Chief Inspector Armand especially loves the getaway with his beloved spouse that gives him time away from criminal activities. The only other visitors are the Finney brood celebrating a reunion of sorts at the manor. The family matriarch Irene hosts a gala in tribute to her late husband. The highlight of the festivities is the unveiling of a statue in her spouse's honor in the Manoir's garden. However, when the statue crumbles off its base it kills one of the middle age adult daughters. Although on vacation, Gamache cannot let it go as an accident; instead he investigates expecting to discover an accident, but instead finds a dysfunctional family who loathe one another. Murder is not out of the question even as the snooty Finney brood insult and scorn the chief inspector for his respectful methodology and worse for his ancestry. Part of the fun in this Quebec police procedural is the disdainful treatment by the haughty Finney family who assume Gamache is an idiot beneath them socially and intellectually; a sort of loose nod to Colombo. The investigation is top rate enhanced by the obvious flaws of the lead character, his wife (who brings some humor with her not again reaction) and the prime suspects. Fans will enjoy the intelligent and dedicated (this time instead of the Surete insisting obstinate, the Finney brood does) Gamache's vacation at an isolated resort as he relishes the investigation (see STILL LIFE and THE CRUELEST MONTH). Harriet Klausner
Copyright © 2020 Thriftbooks.com Terms of Use | Privacy Policy | Do Not Sell My Personal Information | Accessibility Statement
ThriftBooks® and the ThriftBooks® logo are registered trademarks of Thrift Books Global, LLC