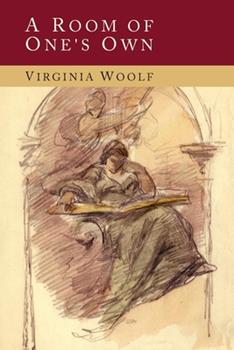 A Room of One's Own

2015 Reprint of the Original Edition of 1929. "A Room of One's Own" is an extended essay by Virginia Woolf. First published in 1929, the essay was based on a series of lectures she delivered at Cambridge University in October 1928. While this extended essay in fact employs a fictional narrator and narrative to explore women both as writers of and characters in fiction, the manuscript for the delivery of the series of lectures, titled "Women and Fiction",...

Such an intricate portrait by and extraordinary writer

Published by Acchan , 2 years ago
I've long waited to obtain this book and now I can finally say I regret waiting this long. Woolf is my favorite writer already!

Old but so good

Published by Catmother , 3 years ago
So Woolf hits in right on the head with this essay. Women had and still have a lot of problems. Though this is an essay it is so enjoyable to read. She is very informal so it is not stuff.

Published by Thriftbooks.com User , 13 years ago
There is no mistaking Woolf's writing style: intricate, introspective, convoluted and then again portraying ideas and situations with brilliant clarity and insight. She ponders the plight of women during her time and through history. Her main question asks why women, despite even those with exceptional talents of intelligence and character, have been abused and dominated by men and relegated to roles as mothers and servants to the men around them. Why are there not great female financiers, writers, academics, etc.? Or why are there too few of them? She searches in many corners such as history books and makes deplorable discoveries: early teen marriages, beatings, restrictions of all sorts, and despicable opinions of women in general by academics and men in other stations. In one instance she compares the plight of Shakespeare and his sister, both equally talented, and you can imagine the results. Her musings are gripping and interesting and at the same time she paints the quality of her physical surroundings quite vividly. This is a favorite book.

Beauty of logic and written word

Published by Thriftbooks.com User , 14 years ago
This book is very short and it expresses brilliant logic that I have not seen for a while. Virginia Wolf writes her case about women and writing. What it takes to be a woman artist and remain one. She argues very carefully, that woman artist needs means (read: money) and a room of her own where she can express herself without any interruptions from the outside world. While many male counterparts of her times argue that women have no character and are inferior to men, Virginia asks question on how come that almost two tousand years ago, Greeks were writing literary work that described women like: Cleopatra, Medea, Clytemnestra and Electra? These powerful female images have no characted and power? Anyone who read classics knows it is far from that. Virgina also argues from the works of early British female writers such as: Lady Winchilsea, Margaret Newcastle and Aphra Behn, that finest poetry was created by a women of noble birth married into a noble families. These women were educated, cultured, most had no children and had very understanding and supportive husbands or were single. They were lonely creatures who produced valuable work. Women of lower birth and less education, such as Jane Austen and Bronte sisters, were talented, but they wrote about the world they new about: middle class that was all around them. They were social observers who wrote in the crowded living rooms about people that were part of their own world. In addition, they did not produce poems, they produced novels primarily. Virginia argues that only the most perceptive of women are capable of producing remarkable poetry. She also draws similarity that it was male writers from the upper classes that created masterpieces. The exception was Keats, who was poor but who also dies young - since writing is exhausting both physically and emotionally. But she also argues that the finest of male voices who dedicated their lives to writing has sort of sensitivity that is unique to women. So the true writer is never he or she, it is a mix of both sexes. This is one of the most powerful feminist books I have ever read and I admire Virginia Woolf for having a courage to create it and share it with the public.

If you want to be a woman writer, this is a must-read!

Published by Thriftbooks.com User , 15 years ago
I really didn't know much about Virginia Woolf until 2005, when I ended up living with a dear friend who taught at a local college. Like most folks, I knew Woolf was a writer of the early 1900s and I'd seen the movie "The Hours" and that was the sum total of my knowledge. One day, my dear friend handed me this book and said, "You'll like this." I was intimidated. After all, it's Virginia Woolf and only really smart people can read Woolf's writings. But I decided to read what I could and glaze over the rest. I ended up tucking myself into bed with this book every night and reading it again and again and again. Yes, Woolf was a Victorian-era writer and the prose is thick and heavy-laden with Victorian verbosity, but her powerful writing style shines through the complicated sentences and nuanced lexicon. My very favorite part in this essay, originally delivered to college students, was where she wrote, "...moreover, it is all very well for you, who have got yourselves to college and enjoy sitting rooms of your own to say that genius should disregard such opinions; that genius should be above caring what is said of it. Unfortunately, it is precisely the men and women of genius who mind most what is said of them." After reading that, I felt that Ms. Woolf had reached through the decades and touched my very soul. For so many years, I struggled and struggled and struggled to stop caring what people thought or said about me and that single statement uttered and recorded by this amazing woman changed my life forever.

Published by Thriftbooks.com User , 21 years ago
I was terrified when I found out that I had to read this book for my women's studies class because my mom told me that Virginia Woolf was like James Joyce stylistically. When I actually started reading A Room of Ones Own, I was pleasantly surprised by the intimacy and smoothness of Woolf's writing, and her clear logic compared with the rigidity of "the old boy's club." She offers a simple, well thought-out argument for why a woman needs financial independence and a room of her own in order to achieve what men can achieve artistically and academically. The depressing part about A Room of Ones Own is a lot of what she writes about the status of women today compared to that of men is still true.
Trustpilot
Copyright © 2022 Thriftbooks.com Terms of Use | Privacy Policy | Do Not Sell or Share My Personal Information | Accessibility Statement
ThriftBooks® and the ThriftBooks® logo are registered trademarks of Thrift Books Global, LLC