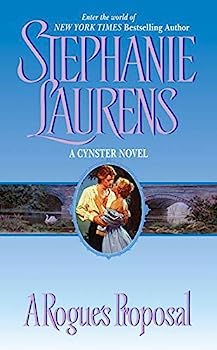 (Book #4 in the Cynster Series)

This description may be from another edition of this product. Demon Cynster has seen love bring his brethren to their knees, and he's vowed that he will not share their fate ... until he spies Felicity Parteger sneaking about his racing stable. Demon remembers...

One of the best in this series!

Wonderful..Well worth it to read!

Published by Thriftbooks.com User , 21 years ago
This is another story in the "Bar Cynster" series. In this story, Harold Henry Cynster, better known as Demon, decides to retreat to his racing farm far away from society and matchmaking mama's. When he arrives, he's suprised to find a new stable 'boy' who is just a little too shapely in the right places to be a jockey. Relieved to finally figure that the 'boy' is no boy at all, but Felicity Parteger, Demon demands that she stop playing the part of male and stick to being female. Felicity is then forced to tell him of a racing syndicate that is bribing jockeys and that someone that they both know is invloved and is now in hiding for his life. Demon agrees to help her on one condition, that she stay at home and lets him handle everything. Of course for an independent woman, this is out of the question, so they form a sort of 'partnership' that eventually turns into seduction. But when Demon asks her to marry him, she refuses; and then starts another battle of wills that will keep you glued to the pages.Stephanie Laurens knows how to write Regency like no other. All of the books in the "Bar Cynster" series are well written and captivating. The characters are thought out and developed to such a degree, that they will seem real to every reader.Read them all, you'll be very glad that you did!

Published by Thriftbooks.com User , 21 years ago
I had to get past the name "Demon" and once I did, I thoroughly enjoyed this book. He and Flick were such a fun couple to read about. I really enjoyed their chemistry. I usually skip through the sex scenes, but this author really knows how to write 'em!

Published by Thriftbooks.com User , 21 years ago
I have fallen in love with Laurens. Her first Cynster about Devil remained my favorite until 'ARP'. Demon and Flick interact so well together they almost seem 'real'. Flick is so far removed from the other Cynster women that I found her refreshing. I had just about had enough of needlepoint. I just can't say enough good things about Laurens. The sensual content in her books is almost erotic - not too much, mind you. (Scandal's Bride, not my favorite Cynster book, was probably the most sensual. And for Laurens that is saying something.). Laurens has fast become my favorite writer. She writes awfully well, she knows the regency period and she knows how to write a mind boggling love scene. If Laurens gets any better, I might have to learn how to 'swoon'. Check out her 'pre' Cynster work 'Captain Jack's Woman.' It's delightful. Keep up the good work, Stephanie!

Published by Thriftbooks.com User , 22 years ago
I loved this installment in the Bar Cynster series! The development of the relationship between the two central characters was very realistic. I found Flick trying to understand and cope with the transformation of Demon from her childhood hero/ideal into a real life potential husband a delight and far more believable than Patience trying to cope with her "distrust" of Vane's sincerity in "A Rake's Vow". Readers wanting a lot of suspense might be disappointed, but those who enjoy well drawn characters will love this one.
Copyright © 2020 Thriftbooks.com Terms of Use | Privacy Policy | Do Not Sell My Personal Information | Accessibility Statement
ThriftBooks® and the ThriftBooks® logo are registered trademarks of Thrift Books Global, LLC