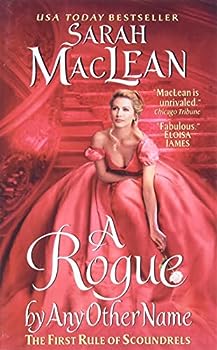 (Book #1 in the The Rules of Scoundrels Series)

What a scoundrel wants, a scoundrel gets. . . A decade ago, the Marquess of Bourne was cast from society with nothing but his title. Now a partner in London's most exclusive gaming hell, the cold,... This description may be from another edition of this product.

Romance in a Gaming Hell

Published by LRRomance , 3 years ago
Sarah Maclean spins a Regency Romance that starts with the ruin of a Young Marquess, who loses all his entitled lands and money and vows revenge. Years after his ruin the Marquess of Bourne now Co-owns London's most famous gaming hell, The Fallen Angel. With his four partners, they dominate the London gambling underworld. At the peak of his success the Marquess learn that the Marquess family lands that he lost all those years ago are now up for grabs....as part of a dowry. Lady Penelope's dowry, his friend and next door neighbor growing up. Lady Penelope's spinsterhood after a failed engagement is ruining her younger sisters chances at good matches and her father is having no more of it. So her father places a large dowry and all the Bourne lands into Lady Penelope's dowry to get her on the marriage mart.... this couple has chemistry and history. The humor is fresh and Lady Penelope is a daring and caring heroine. HEA Guaranteed
Trustpilot
Copyright © 2022 Thriftbooks.com Terms of Use | Privacy Policy | Do Not Sell My Personal Information | Cookie Preferences | Accessibility Statement
ThriftBooks® and the ThriftBooks® logo are registered trademarks of Thrift Books Global, LLC