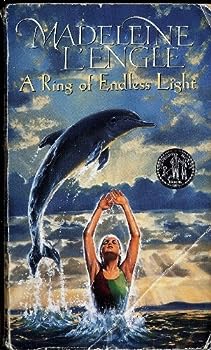 A Ring of Endless Light

"With customary grace and firm control of an intricate plot, L'Engle has created another irresistible novel about familiar characters, the Austin family. Vicky, 16, narrates the climactic events with Grandfather Eaton on a New England island, where he is living his last days." --"Publishers Weekly"

L'Engle at her finest!

Published by Thriftbooks.com User , 18 years ago
Vicky Austin knows that this will be her last summer on Seven Bay Island with her beloved grandfather, because the scholarly retired clergyman is dying of a fast-moving form of leukemia. 15-year-old Vicky stands on the dividing line between childhood and adulthood. As a budding poet, she promises to retain childhood's heightened and sometimes painful sensitivities even after she crosses that border. That's a bond she shares with her grandfather, but not with the rest of her loving yet far more scientifically inclined family.Complicating this already trying time for Vicky are three young men. Leo, a lifelong friend of her family, wants more from her than the companionship and sympathy she is ready to offer him. Zachary, a severely troubled and wealthy youth who was her first real boyfriend, follows her to Seven Bay Island and alternately charms and frightens her with attentions that her family would prefer she didn't accept. And Adam, her older brother John's friend from MIT, assumes an important place in her life when he discovers that Vicky's extraordinary (and unexpected, and unexplained) ability to communicate with dolphins can transform his summer project at the Island's oceanographic research station.While Vicky's romantic and other feelings for this trio are central to the story, this is not a conventional tale of young love in which the girl's choice of suitor is the whole point. Vicky Austin is a complete person, and not about to treat romance at age 15 as the be-all and end-all of her life so far; nor as the defining influence on her future. Until now she has been something of a misfit, with her physician father and scientifically inclined older brother and younger sister tech-talking over her head. This summer, finally, "dreamy Vicky" who often slips away to write verses comes into her own. Which, as so often happens in real life, can only occur as she is tested by life. And by death, and by her responses to both.L'Engle at her finest! Although I'm of grandmotherly years now, "A Wrinkle in Time" was among my own girlhood's defining books. I must now go out and find the rest of the Austin books. This writer's works have something to offer any reader, not just youthful ones.--Nina M. Osier, author of "Love, Jimmy: A Maine Veteran's Longest Battle"

Published by Thriftbooks.com User , 21 years ago
Hi ya'll! First of all, A Ring of Endless Light is a simply great book by Madeline L'Engle, probably her best book. It's about not-quite-sixteen Vicky Austin, who in one summer finds out about life, death, and love. She finds herself the attention of three boys. Leo is a fried longing for more than friendship, but becoming more of a friend than ever to Vicky. Zachary is sophisticated, rich, and gorgeous to boot. However, he has a dark, maniacal side, that flirts with death. He pleads to Vicky that he needs her, but she's not so sure. Adam is a friend of her older brother John, nineteen. He's doing a project with dolphins, and Vicky is excited to help. She begins to think of Adam as more of a friend, but he just acts as though she were a child. Death seems to be erupting everywhere to Vicky. Commander Rodney, Leo's father had died, Zachary's mother died, her grandfather's health is deteriating, and an awful tragedy suddenly brings Vicky's life to a halting stop. She has held Death in her hands, literally, and her consciousness just fell apart. Only one thing can save her, the light, the ring of pure and endless light from the dolphins. This is an amazing book by Madeline L'Engle, and is one of my all-time favorites. Coming from me, that's really something. L'Engle fans are sure to love this, as well as anyone who enjoys a thoughtful, serious, well-written book. Read it!

Published by Thriftbooks.com User , 21 years ago
This was the first book I had ever read by this author and it was certainly the best book I have ever read. I know that the age is 9-12 but I am 14(almost 15) and I loved it. The main character, Vicky Austin, is sort of torn between three young men while she is also suffering from the hurt with her grandfather being very ill. Leo is an old friend, but he wants more than friendship while Vicky only wants that of him. Zachary is troubled and he feels he needs Vicky. Adam works with her brother John and is conducted an experiment with dolphins and he wants Vicky to be a part of it, but he treats her as a child. She is confused with life...and death.Madeleine L'Engle shows her knowledge in science skills as well as in literature through this excellent book. I really hope this inspires you to read this book at any age!

Published by Thriftbooks.com User , 21 years ago
I've found comfort and happiness, as well as sorrow and hope in this beautiful novel. I've read so many books since I first picked this up in ninth grade, but this has always remained my favorite. It's the only book I've ever read that I take something new out of everytime. The story of Vicky and her summer of confusion and light begins in death and ends in death, but L'Engle celebrates both life and death in a convincing and realistic way. Throughout the book, we also get snatches of fascinating scientific ideas, religious views, and other interesting trivia that L'Engle manages to weave in and parallel to Vicky's life. In my opinion, this book far surpasses "A Wrinkle in Time." A must-read for anyone, anytime, any age, anywhere.

Published by Thriftbooks.com User , 21 years ago
I don't believe that I've read many books as powerful as this one. All of Ms. L'Engle's books are amazing, but this one is my personal favorite. Vicky Austin, star of two previous books, has hit the hardest summer of her life. Her beloved grandfather, who is an absolutely amazing person, is dying of leukemia, and she has to come to terms with this. Enter three young men, all with their own experiences of death: Leo, whose father had died; Zachary, whose mother had died; and Adam from _The Arm of the Starfish_, who watched as someone he cared for was shot. Vicky hears their stories and has to come up with her own way to deal with dying. And this is only half of it. A previous reviewer didn't like the ending, but it was one of my favorite parts. The book as a whole is a testament to humanity's ability to see the whole of things, not one part. Like another previous reviewer, I would recommend this book to the 13-plus age group, rather than the fifth or sixth grade level the book has been given. One of the perfect pieces of children's literature.
Copyright © 2020 Thriftbooks.com Terms of Use | Privacy Policy | Do Not Sell My Personal Information | Accessibility Statement
ThriftBooks® and the ThriftBooks® logo are registered trademarks of Thrift Books Global, LLC