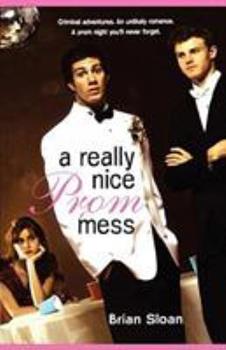 Cameron doesn't want to go to prom. Not with his boyfriend, Shane, and definitely not with his fake date, Virginia. Sure, it's senior prom, it's the end of high school and Virginia is drop-dead gorgeous. But none of that matters to Cam, who's never liked any high school dance. Then an unexpected kiss changes everything, and Cam needs to make a quick exit. But his night is far from over. From a high-speed car chase, to a stop at the after-prom party,...

Published by Thriftbooks.com User , 15 years ago
Brian Sloan may just be one of the better writers of comedy to come around in a long time. He manages to take a 'normal high school prom' situation and turn out a comedy of errors, of social faux pas, of class distinctions, of teenage drug and alcohol abuse, and of gay coming out stories and combine them in a page turner laugh riot that is one of the best reads around. Sort of an Augusten Burroughs dealing with normal people! The story is literally twelve hours of a prom night attended (among others, of course) by two closeted gay boyfriends and their girl friend dates, an evening which manages to unmask everyone's foibles and secrets, lead to flaming hairdos, Russian drug dealers, police raids, and eventually a resolution to a courtship between two mismatched men that provides a world of lessons. Sloan narrates the story as seventeen-going-on-eighteen Cameron Hayes and makes him so visual and witty and vulnerable that we can't help but love the kid and stay with him, delightedly entertained, until the very last page. There are moments when the contemporary teen language becomes a bit excessive: there are other more serious problems with Sloan's inappropriately poor grammar. But the overall result is galloping romp through that 'night of nights' when high school seniors (especially ones of wealth) toss convention to the winds of hormonal explosion and the fireworks are stunning! Grady Harp, October 06

Laugh out Loud Funny-A must read!!

Published by Thriftbooks.com User , 15 years ago
A really nice prom mess was one of the funniest books I have ever read. Cameron's misadventures on prom night are hilarious. He seriously has the worst prom ever. This is a highly unrealistic story but it is such a fun read. From Dmitri the drug dealer bi-sexual Russian to Virginia McKinley the wild party girl to Buck-the gay deaf stripper the characeters are all so likable and funny. This book is like all those teenage prom movies (She's All That, Drive Me Crazy etc.) with a little twist. I could not put this book down and definitely recommend it to anyone!

Published by Thriftbooks.com User , 16 years ago
Very funny book. I read it at work one day and I was literally laughing out loud in some spots. I definitely reccommend this!

This book made me laugh outloud!

Published by Thriftbooks.com User , 16 years ago
I love this book and read it in less than 12hours! It was really funny and I would reccomend it as a summer read.

It Just Gets Better

Published by Thriftbooks.com User , 16 years ago
I stumbled onto this book by accident and was intrigued by the first chapter and figured I'd take a chance. This was probably the best choice I have made in awhile. The book starts strong with the prom plot set up with the fake dates, drunk high school girls and closted hotties but goes off the rails (In a good way) with deaf dancers, drug dealers, skinny dipping, smoking pot, car chases, cute cops and more plot twists than seems possible. The book reads like a smart, funny, slapstick, heartfelt comedy and managed to make me laugh, smile, cry, and not put it down. It's just a great summer read that has one the best cast of characters ever--you might not like all of them but they all need to be there and they all work to form one of the most daring books I have read in a long time. Just read it!
Copyright © 2020 Thriftbooks.com Terms of Use | Privacy Policy | Do Not Sell My Personal Information | Accessibility Statement
ThriftBooks® and the ThriftBooks® logo are registered trademarks of Thrift Books Global, LLC