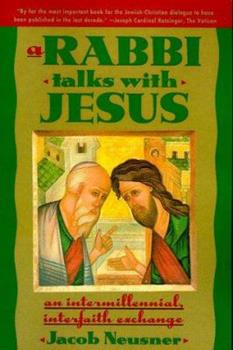 Rabbi Talks with Jesus, A

". . . For the Rabbi, argument with another person is the highest form of respect you can pay to him. So the Rabbi argues with Jesus because he respects him so much and he argues about what is important: the apparent conflict between the words of Jesus and the Torah".--Andrew M. Greeley. "By far the most important book for the Jewish-Christian dialogue to have been published in the last decade".--Joseph Cardinal Ratzinger.

A Rabbi Talks with Jesus

Published by Thriftbooks.com User , 14 years ago
I believe the author of this book misses the entire point of Jesus BUT from his viewpoint he does an excellent job of "talking" with Jesus. I admire the author for reviewing and taking the stand he does. I would love to meet him someday and just discuss with him this entire book and his life and action with other Christians and with his fellow Jews. He gives you the feeling he is very honest and forthright in his beliefs and understandings of our "GOD".

What an original concept!

Published by Thriftbooks.com User , 16 years ago
Rabbi Neusner imagines the opportunity to live in Jesus' day and age and to enage in conversation with him. Neusner makes it very clear to his readers that he would not become a follower of the Nazarean rabbi, because he finds several problems with the content of Jesus's teachings. Here are some examples: Jesus' teaching is not addressed to the "eternal Israel" but to "you", a selected few who will follow him rather than the Torah: "The message of Torah always concerns the eternal Israel. The message of Jesus Christ always concerns those who follow him." (p. 103). Jesus' emphasis is on intimate, secluded, individualistic prayer rather than public, collective (i.e., family and community), liturgical prayer: "the individual in search of salvation, the private person in quest of God." (p. 96) Jesus' teaching undermines the primacy of the family in the social order: to follow Jesus entails abandoning home and family. Jesus' focus is on himself, NOT on the Torah (when Jesus says: "whoever loves his father and mother more than him, is not worthy of being his disciple," it is a stumbling block: only God can ask that!!!). So, we have a shift from Torah to Jesus, as if the Ten Commandments and the Law were not enough. Jesus' emphasis on "be perfect", salvation, freedom from sin and atonement vs. "be holy" of the Torah (sanctification of daily life, separation of sacred from profane). Jesus' emphasis on kingdom to come vs. "here and now". According to Neusner, it's what Jesus did NOT talk about that is disturbing, namely the importance of Torah or God's revelation on Sinai. Neusner argues that it is important to both keep rites AND inner morality, instead of privileging the latter at the expense of the former. It seems that Jesus dispensed with the rituals prescribed by the Torah: "To Jesus all that matters is obedience to the moral and ethical teachings of the Torah." (p. 137). In conclusion, Jesus abolished some of the dots and iotas of the Torah (Mt 15:10, 17-20) despite his protestation that he did not come to abolish it. Despite of his criticisms, Neusner remains one of the few Jewish scholars to take Christianity seriously and to converse with it.

unique in its dialogue

Published by Thriftbooks.com User , 18 years ago
This book does a nice job in its judeo-christian dialogue. I was raised Christian but now I am marrying a Jew and have decided to convert to have a single faith marriage. To start with, this book is written for Christians (emphasis), not Jews per se, so it goes into some repetition to emphasize its distinctions between Jewish interpretations of the Torah vs. Jesus' intepretations. I like its candor and it is very respectful of the Christian viewpoint. Though the writing at times can be a bit "klunky", I read the book quickly in a two day period so it is not too theroetical and states its main points clearly. What is discusses includes: interpretation of the Sabbath; ritual purity vs ethics; God's (Moses/Scripture)thou and community message vs Jesus' I and you message; following the religious message vs. any conflict to commitment to parents, etc. My only drawback to this book is that the Rabbi considers Judaism "the only way" not "a way", hence his rightness on his position again and again. Judaism (at least Reform) doesn't take this stance, and when looking at the chapter headings, I feared a hidden negative diatribe against Christianity. But not to worry! If anything, he goes over backwards trying not to offend Chrsitians, even at the cost of his fictional "dialogue" with Jesus (who wants to be accused of putting words in his mouth?)Book gets five stars from me. It is clear that Judaism and Christianity are two distinct, ethical religions and there is nothing incomplete or inferior with Judaism. To bad religion historically has been used is such negative ways.

Exciting to hear the debate.

Published by Thriftbooks.com User , 19 years ago
Most Christians do not understand the conflict between the Jesus and the Pharisees. Was Jesus enlightened to God's intent and the Pharisees in the dark? Read this book and the foundation of that dispute opens in front of you. Neusner did not change my religious convictions, but he opened my heart and mind to the reasons the Pharisees did not accept Jesus and felt threatened by his message. It was not about mere political power. Their refusal was based upon deeply held convictions. Please, read this book.

Published by Thriftbooks.com User , 22 years ago
I'm a Christian so I didn't quite know what to expect when I read this book. I found though, that I was deeply interested in it once I started and found it hard to put down. the book outlines the conflicting beliefs of Christianity and Judaism. It also shows some of the similarities. Regardless of whether or not you're Jewish or Christian or atheist or any other religion for that matter, by the last page you're going to have something new to think about.
Trustpilot
Copyright © 2022 Thriftbooks.com Terms of Use | Privacy Policy | Do Not Sell or Share My Personal Information | Accessibility Statement
ThriftBooks® and the ThriftBooks® logo are registered trademarks of Thrift Books Global, LLC