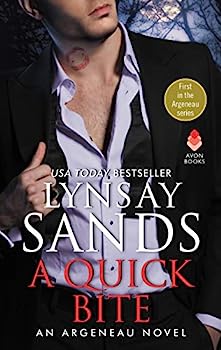 (Book #1 in the Argeneau Series)

This description may be from another edition of this product. That hot guy tied to Lissianna Argeneau's bed? He's not dessert--he's the main course Lissianna has been spending her centuries pining for Mr. Right, not just a quick snack, and this sexy guy she...

The first of many many good reads

Published by Michi , 2 years ago
I absolutly adore the argeneau series!! Lynsay sand puts together a great story filled with romance, thrills, humorous wit, charm etc. I always find myself chuckling or biting my lip in anticipation of whats to come while i devour the stories. Absolutely recommend!!

Published by Thriftbooks.com User , 15 years ago
This is the first lynsay sands book i have read and i really liked it.The characters were cool lissiana and her cousins were my favorite's in the book.Poor greg he just wants to go on vacation but i think he had a better time with Lissiana's family.I look forward to Lynsay Sands next book.

Published by Thriftbooks.com User , 15 years ago
A Quick Bite by Lynsay Sands fits right in with the other wickedly delightful tales of the Argeneau family. Lissianna Argeneau finds a hot and sexy man tied to her bed. At first she thinks he is a light snack for her but he is really there as a present from her mom. Seems her mom thinks he can treat her phobia. Poor Liss faints at the sight of blood, which is a problem for a Vampire. Dr. Greg Hewitt is well known for treating phobias. He can't believe he went willingly into a car trunk and let himself be tied to a bed. He is more then intrigued by the beautiful woman who walks into the room. Greg is flabbergasted as he puts all the facts together and realizes Vampires are holding him. Lissianna and Greg have an unconventional romance. Plus it seems that someone is after Liss. As Greg and Liss dig deeper into the strange happenings they find a love for all eternity. A Quick Bite is treasure. The family connections are a treat to watch. It was great to go back see how Greg and Lissianna met and fell in love. I have enjoyed all Sands Vampires books. I hope that Thomas gets his story soon.

Published by Thriftbooks.com User , 16 years ago
If you're looking for a Para-romance/comedy with a great family then you'll enjoy this series: ("A Quick Bite" (read them in this order), "Love Bites", "Single White Vampire", & "Tall, Dark and Hungry"). I did have to remind myself to stop comparing these stories to the more maudlin Vamp books by authors like Christine Feehan or Sherrilyn Kenyon whom have both created such awesome worlds, and whose books are full of action and suspense. When I read a "Vampire" book I'm used to expecting magic and suspense, shape shifting, "Evil" bad guys, etc. But while these stories are just about relationship development, it's a refreshing change. I just love this family! Yes, there was a comical vampire hunter in Love Bites but as far as vampirism; she takes a more comical route, which is fun and different. They preferred bagged blood as opposed to biting (which they considered "out of fashion" unless it was an emergency), which for me did seem to take a bit of the intimacy out of it. But it works, because there's just enough "nibbling" between just the right people. These heroes's were also not very "Alpha" men, as some would expect from this type of book. Greg was a psychologist, Etienne was a video game inventor, Lucern was an author, and Bastien was a businessman. There were only three instances where Greg, Etienne and then Lucern were put in "dangerous" positions where they encountered a vampire hunter (which was more comical than anything else). In "Tall, Dark and Hungry" there was absolutely nothing. But, like I said, these stories are not to be missed, all of the characters were great, and I'm really looking forward to the upcoming secondary characters stories, hopefully Thomas will be next, he's such a "Charmer!"

Published by Thriftbooks.com User , 16 years ago
I've read all of Lynsay Sands' vampire books, they all make for a funny and enjoyable read and this one is no exception. As a writer Miss Sands has a deft touch and I'm never sure whether her tongue-in-cheek attitude isn't actually parodying the genre in which she writes. Whatever the motive behind her humour the books never fail to put a smile on my face. With regard to a previous reviewer's complaint that the book is out of sequence with the others in the series I can only say that this book stands up independently in it's plot and characters and that anyone who needs sequential episodes should stick to watching soaps.

Published by Thriftbooks.com User , 16 years ago
Lynsay is back with another long-awaited Argeneau tale, and new sexy updated cover instead of the cartoon ones. New Publisher, the vamps are no longer with Dorchester. They're now put out by Avon (though Dorchester will continue to do her Historicals). Originally, this was the very first Argeneau tale in the series, not Single White Vampire (Lucern's tale). So it's great to finally get Lucern's little sister's story. As followers of the series know, the Argeneau vamps are the modern day, intelligent sort, who know feasting in the wild can get "blood" with all sorts of problems. In order to skip all this rather mundane ugliness, they've invested in blood banks that see them supplied with a full range of "flavors" and blood that is safe! Only, Lissianna really has trouble with this popping her fangs into a blood bag and having a quick munchie. So Mama Argeneau sets out to give Lissianna the perfect present - one sexy male tied up and waiting. Well, Lissianna wants Mr. Right, not just Mr. Available. She's tired of her vamp immortal life, and would like someone to share it with. Lissianna has other problems, such as her fainting at the sight of blood, an annoying trait for a vampire. For a Birthday gift, Mama has gone out and fetched Dr. Gregory Hewitt, used mind control to get him to tuck himself up in the trunk of her car, and now has him tied up nekkid on Lissianna's bed. Wouldst that all mums were so obliging on birthdays! Greg was planning a much-needed vacation. The last he recalls is leaving the office and planning on getting away. Instead, he wakes up in a stranger's bedroom. Well, he's male - this cannot be all bad. Okay, she's a vampire romance may be a bit difficult to work out, but to quote Joey Brown in Some Like it Home, "nobody's perfect." A great tale which you can sink your fangs into! Expect Vincent Argeneau sometime after the first of the year. Keep 'em coming, Lynsay! For thos paying attention - the series has NEVER been "in order" Single White Vampire was Lucern's tale where wrote about his siblings' lovelifes - their real lovelife and romance editors thought they were vampire romances. So the takes of his brothers and sisters come AFTER his tale meaning they had already happened before Lucern happened. Since there are four more currently planned over the next two years waiting to read them in order is plain silly. They are to be read and enjoyed. Cannot do better than that. A writer has little control of these things. Originally this was to the the first in the series. The publisher decided otherwise. Stop getting bent out of shape over it and just have fun.
Copyright © 2020 Thriftbooks.com Terms of Use | Privacy Policy | Do Not Sell My Personal Information | Accessibility Statement
ThriftBooks® and the ThriftBooks® logo are registered trademarks of Thrift Books Global, LLC