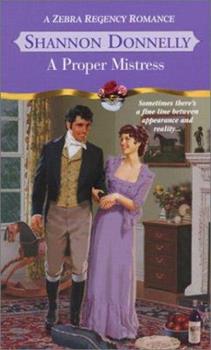 (Book #2 in the Proper Series Series)

In order to protect his elder brother from disinheritance, Theodore Winslow must incur his father's wrath. How better than to marry a low-born strumpet? He sets out to find someone to play the part in return for a handsome sum. However, his ruse goes awry...

Published by Thriftbooks.com User , 17 years ago
Theodore "Theo" Winslow is a second son. A young man who hero worships and does his best to emulate his elder wastrel of a brother. Their father uses threats and intimidations to keep them in line by disinheriting and then re-inheriting the elder as a means of control. Theo, thinking to put an end to their father's controlling tactics sets out to have himself disowned in order to have his elder brother reinstated. His plan is to bring home a thoroughly crass and totally unsuitable `bride' and so goes to Sallie Ellis' brothel where he negotiates for one of her `working girls' to pose as his intended. Sallie, not having any `working girls' to spare, coerces her cook, the very young and beautiful virgin - Molly Sweet to take on the position. Molly, born a lady but through a twist of fate, found herself employed in the brothel as a cook had a dream of one day buying and cooking in her own inn. Sallie knew this and used that knowledge as a bargaining chip. So with the tempting offer of fifty pounds for a few days work - Sallie convinced Molly to think of the next few days as a holiday `posing and dressing' as a doxy without having to do any of the physical requirements. Initially, both Theo and Molly agree to this as nothing more than a business arrangement, but as Molly began slipping in and out of a doxy -like character, Theo finds he is beginning to want a few more liberties. His sweet Miss Sweet is beginning to worm her way into his devil-may-care heart and he finds he just may want to get a little more personal. And, after a few of Theo's kisses, Molly who'd never been kissed before, wouldn't have minded a few more of those kisses herself!This Regency novel by Shannon Donnelly's is a wonderfully satisfying, deftly plotted delight. The excellent characterizations of the lead protagonists are handled in a way that will endear the sweet "Miss Sweet' into the readers heart. The humor of the double entendres that Theo whips past Molly is really cute and superbly handled by this author. Molly is a sweetheart and under her tutelage Theo finally grew up! If I have any complaint at all, it is that it ended too soon as it was such a warm and fuzzy read one just wanted it to last forever. --- Marilyn, Official Reviewer for www.historicalromancewriters.com ----

A not so improper suggestion --

Published by Thriftbooks.com User , 18 years ago
If you like reading a 'get 'em together and keep 'em together' type romp, this delightful example is sure to please any fan of the Regency romance genre, brimming as it does with smiles and laughter. In a switch from the usual plot, desperate Theo Winslow hatches a plan to get himself disinherited by his curmudgeonly father. All he needs is a wife. An unsuitable wife, of course, one who is totally unsuitable for that position. Except that he really does not want to get married. So where will he find this a wife who isn't a wife? In addition to being somewhat unreliable, (actresses are prone to bow out at the last moment when a real acting job appears!) they're also too expensive. But then re realizes he knows the owner of a bawdy house, and so he appeals to Sallie Ellis for help. By chance, considering his partiality for red hair, Sallie realizes she has the perfect nominee right in her kitchen! Although a working woman, to be sure, Molly Sweet is the cook for Sallie's employees while yet not being one of them. Molly's dream is to someday own an inn, and threfore is working to save up enough money to be able to purchase one. Molly is an orphan, knowing little of her antecedents or current family, although she's definitely not a girl of the streets. She knows that her father was with the Army in India, and after both her parents succumbed to cholera, an uncle took her in. Unfortunately, he soon became ill himself, and one of his last acts was to ship Molly home to England and her family. These plans went awry, however, and Molly found herself alone on the docks. A bright girl, she set about finding work, which is how she ended up, some years later, in Sallie's kitchen. After having driven away his older son by his roughshod tactics, Theo's father, who is a bully, threatens to do the same to Theo. The young man decides to precipitate such action by engaging Molly to be his pretend sweetheart, prompting his real disinheritance, thus leaving him free to live his own life. As Molly and Theo discover more and more about each other, and the various incidents that have made them as they are, they find more in common than otherwise, to their mutual surprise. When Terrence (the previously disinherited older brother) comes home to see Theo's strumpet for himself, he unwittingly prompts Molly into giving the three Winslow men a good piece of her mind. She then leaves for London, and the familiar and warm kitchen at Sallie's house. A Proper Mistress is a pleasant change of pace, about a young woman who has no idea of how to be a proper mistress, and a young man who decides that, after all is said and done, he doesn't want one, anyway. What he really wants is?a wife! Theo and Molly are engaging, well-drawn characters who'll tug at your heart as they fumble their way through the obstacles strewn along the path to true love. Their story is told with a gentle sense of humor by the author, who is also very capable of more serious books. Most enjoyable.

Heroine is a cook in a whorehouse! I love it!

Published by Thriftbooks.com User , 18 years ago
Theo Winslow is desperately seeking his father's disapproval. His strange ambition sends him to a brothal, where he seeks to hire a harlot to pretend to be his scandalous fiance. But Sallie (the woman who runs the whorehouse) is fresh out of options. ...'Til she turns to Molly Sweet, who works as the cook in Sallie's disreputable house. Though born a lady, a series of unfortunate events landed Molly in Sallie's employ. Molly has but one dream: to establish her own inn. And posing at Theo's mistress would earn her fifty pounds. With that sum, she'd be well on her way to success. So, Theo thinks Molly is a prostitute, and Molly plays along with a ruse. And that's all I'll say about the plot...The characters in this book (secondary AND lead) are great. Molly is a spitfire, saucy little thing. My heart went out to her. She is fresh and warm--you just want to embrace her. Theo was man of many dimensions. In the prequel to this book (Donnelly's "Proper Conduct") I thought he was quite childish and annoying. In "A Proper Mistress" he is still a tempermental, boyish, rake-in-training. But there are so many layers to his character. Though not quite a gentleman, Theo is certainly not without charm. And once he is able to shake the hero-worshipping he feels for his brother, Theo turns out to be a great man. Like Theo, there are many different layers to this novel. It's funny, it's touching, it's frustrating, it's heart-rending. It's about love, FAMILY, sacrifice. It brought a tear to my eye and left me feeling warm and fuzzy inside. I didn't want to put it down, and I didn't want it to end. It comes highly recommended by me (and I don't give a 5-star rating to many things). Thank you, Shannon Donnelly, for a fresh treasure.Note: You DO NOT have to read "Proper Conduct" to enjoy this book. It certainly stands on its own.
Copyright © 2020 Thriftbooks.com Terms of Use | Privacy Policy | Do Not Sell My Personal Information | Accessibility Statement
ThriftBooks® and the ThriftBooks® logo are registered trademarks of Thrift Books Global, LLC