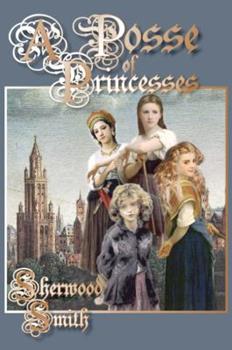 A Posse of Princesses

Rhis is invited along with all the other princesses in her part of the world to the coming-of-age party of the Crown Prince of Vesarja, the central and most important kingdom. When Iardith, the prettiest and most perfect of all the princesses, is abducted, Rhis and her friends come to the rescue.

Published by Thriftbooks.com User , 13 years ago
I read this book straight through the day I got it. Then, then next day, I went through and read it again. The book is refreshing in that you don't just get one "stock" princess in the mix: you get a bunch of different princesses, none of them that are really the "perfect" image of what a princess "should" be. Rhis, the main character, would rather spend time singing and writing ballads and playing the tiranthe (a 24 stringed musical instrument) than studying history and laws from her stuffy sister-in-law. Then a messenger comes from the Queen of Vesarja, inviting her to a rather "Cinderella" like party for the crown prince, where he will meet all of the eligible princesses and ladies from the surrounding kingdoms (and some of the princes as well). But rather than being a simplistic Cinderella-like ball, there are meals, festivities, and other events leading up to the grand masquerade, where people get to meet each other and show of their characters. Rhis learns that words and people are not always as they seem (I'd like to write more, but that might give away too much). When the prettiest and most polished of all the princesses is abducted, Rhis and four friends take off after her (and a group of the princes soon follow), for a rousing adventure that just might change their lives forever (it certainly does Rhis's) The first half of the book is about the party, the second 3/4 is about the chase, and the last little bit is done with letters and one final scene, wrapping things up nicely (but not everything, quite, so the ending isn't "pat") Don't let the mark "YA Angst" deter you from enjoying this lively, upbeat book. Sure, everyone in this book has problems, but they don't wallow in them or enjoy wallowing in them.

Published by Thriftbooks.com User , 13 years ago
This was a great read. I read it almost in one solid go. The book is quite fun. I couldn't resist the title. The book is a wonderful study in manners, and insight into the concerns of young women trying to fit in.

Published by Thriftbooks.com User , 13 years ago
Rhis, princess of the small kingdom of Nym, is going to a party: all the eligible princesses around have been invited to the coming-of-age party of Lios, the crown prince of Vesarja. Though Rhis feels out of place and plain next to Iardith, the most beautiful (and snobbish) of the princesses, she soon finds a circle of friends she can have fun and be herself with, and when Iardith is kidnapped, Rhis and her friends go to the rescue. The idea of princesses competing for a prince could easily be clichéd, but Smith's take on it is fresh and charming, with vivid characters, engaging friendships, and several delightful romances.

Published by Thriftbooks.com User , 13 years ago
I discovered this author with her, at the time, duet Crown and Court Duel. All the things I liked about those books are in this one. Feisty lead character, intricate plotting, it's a romantic adventure. There's a touch of magic, and definitely humor. But at it's heart it is the story of a girl who finds her destiny by helping others with her own unique gifts. One of which is seeing others as people, not as their roles, be it servant or prince.

Published by Thriftbooks.com User , 13 years ago
Cinderella went to the ball, we all know that, but what happened at the ball? What were the other guests like? What did people talk about when they weren't dancing, and who became friends with whom? What was going on behind the scenes? A Posse of Princesses answers those questions. Princess Rhis doesn't think she's necessarily going to snag the prince (though she can't help hoping), but she's determined to have a good time at the ball, and she does. But there's more going on than meets the eye, and the adventure she and her new friends find themselves in when the most obnoxious ball guest is kidnapped snaps with excitement and surprise. The story is tightly written, with likeable, engaging characters (no cardboard cutouts here!), and a good dose of humor.
Copyright © 2020 Thriftbooks.com Terms of Use | Privacy Policy | Do Not Sell My Personal Information | Accessibility Statement
ThriftBooks® and the ThriftBooks® logo are registered trademarks of Thrift Books Global, LLC