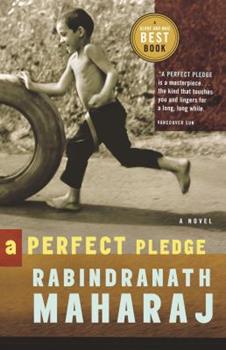 This description may be from another edition of this product. It is 1961 and Trinidad, at once a lush island paradise and a poverty-stricken hole, is inching toward independence. Narpat, a sugar cane farmer, finds himself caught at the crossroads of a changing...

Published by Thriftbooks.com User , 12 years ago
Maharaj has a knack for gently reminding us that, regardless of where we are born or live, we share a common and limited range of human emotion, desire, and experience. In A PERFECT PLEDGE, Narpat is a man with a mission. He endeavours to live what he needs to believe: that he is not what Trinidad has made others. Instead, in his own oddball way, he's determined to shape a new Trinidad--blind to the fact that his efforts, frustration, and idealism are slowly isolating him, making him an island within an island. Readers will delight in the humorous quirks of Maharaj's characters and the vivid picture he paints of one man's struggle to be better than ordinary. More information and news about the author and his books can be found on his website, at rmaharaj dot wordpress dot com.

"Is something that fall on your lap. Nobody else could do it."

Published by Thriftbooks.com User , 16 years ago
In 1956 Trinidad, Narpat Dubay's family lives quietly, this father of four tending his sugar cane patch and designing ingenious contraptions to make life easier. In Trinidad, nothing is ever planned, the frequent floods thought of as an act of God, a punishment, and Narpat seeks to rectify such ignorance. He has also noticed an influx of "Outsiders", squatters who fill empty houses as though they own the land. Narpat is determined to run them out and restore order to a country filled with corruption and graft: "Just like the invaders of India, the Outsiders were introducing a system of values alien to the village." Overburdened by insidious poverty, Narpat's wife, Dulari, borrows two-hundred dollars from her more successful brother to outfit her children properly for school and to arrange transportation for the older girls. While they are dependant on local bus transportation, Dulari waits anxiously for her daughters to return, content only when she has purchased a safe ride for them. Overruled and his authority threatened, Narpat is furious, believing the walk is beneficial, but then he expects every inconvenience to be turned into a learning experience, always ready with homilies to instruct his children on the virtues of hard work. Narpat feels his wife is acting against his wishes, as he routinely attempts to instill good habits and independence in Jeeves, Chandra, Kala and Shushilla. Trinidad's anticipated day of independence is August 31, 1962. With all the crooked politicians in the election, Narpat runs for county councilor, his main concern that the cane farmers own the deeds to their lands. Later, building his factory is an act intrinsically out of step in island society, the degree of individuality and authority he assumes an anomaly. His philosophy too large for his world, Narpat is sure to disappoint, but it is in his nature to pursue his dream. While Narpat dedicates himself to fighting corruption and bureaucracy, his wife and children are held hostage to his ideals. Dulari is essentially powerless, her sanity preserved only by "this numbing ritual of sweeping, cooking, cleaning and washing, this silencing of my mind". Meanwhile, Narpat's life is purpose-driven; he is determined to adhere to the high moral path no matter what the cost, the children caught in the emotional underpinnings of futile arguments between their parents. As they mature, the children may question their father's dogmatic approach to existence, but the most telling exchanges are between husband and wife behind the closed door of their bedroom. Time passes and the island changes but "progress [is] closely allied to treachery". In this landscape, village life, seemingly insignificant in the larger scope of things, is a microcosm for universal principles. The eccentric characters that people these pages, their idiomatic speech and stubbornness, portray a land in the midst of change, corruption a natural outgrowth of its evolution. The voices of Narpat, the Mana
Copyright © 2020 Thriftbooks.com Terms of Use | Privacy Policy | Do Not Sell My Personal Information | Accessibility Statement
ThriftBooks® and the ThriftBooks® logo are registered trademarks of Thrift Books Global, LLC