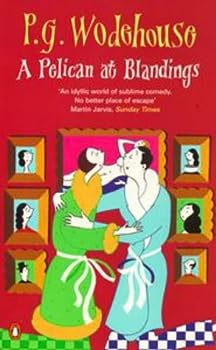 A Pelican at Blandings

(Book #11 in the Blandings Castle Series)

Crisis, wearing a variety of habits, saunters in to Castle Blandings and upsets the hard-won applecart of the peace-loving thirteenth earl. This description may be from another edition of this product.

More Fun at Blandings From the Master of Farce

Published by Thriftbooks.com User , 14 years ago
P.G. Wodehouse, farceur supreme, produced this book, published in the UK as A Pelican at Blandings, in his ninetieth year. The pelican of that title is that non-avian pelican, the Hon. Galahad Threepwood, a member of London's Pelican Club in his youth. It is he who steers the action by introducing an impostor into Blandings Castle and smoothing the path of true love for two couples. As always, Wodehouse's prose is good for at least one belly laugh per page, and moves the action along at a positively breath-taking pace.

Published by Thriftbooks.com User , 15 years ago
If you've purchased this book and yet already have "A Pelican at Blandings", then you've, essentially, bought the same book twice. The good news is, you can never have too much Wodehouse, as any Bean or Crumpet could tell you. This is the story wherein Galahad is called to Blandings Castle to help the hapless Lord Emsworth cope with the advent of his newly married sister, the termagant Constance, her charming American friend, Miss Vanessa Polk, and the never-welcome Alaric, Duke of Dunstable. The plot revolves around Alaric's determination to re-sell (at a formidable mark-up) a portrait (the reclining nude alluded to in the title) to a pining American named Trout whose most recent ex-wife resembles the subject of the portrait. In true Wodehouseian style, sundered hearts are re-united through the aid of the intrepid Gally, in the teeth of Lady Constance and Duke Alaric. If you enjoy Wodehouse and the Blandings series, this is a book for you.

Published by Thriftbooks.com User , 16 years ago
I do not agree with some of the other reviewers that "A Pelican at Blandings" is subpar for P.G. Wodehouse. It is true that it does not have one scene, as some of Wodehouse's novels have ("Leave it to Psmith," for example), in which everything comes together in inspired mayhem. But for a carefully worked-out, complicated plot, wonderful characters, and above all, Wodehouse's inspired comic writing, this novel is right up there. Wodehouse is the only writer I have read who consistently makes me laugh out loud. This one certainly did that. The reading by the late Frederick Davidson (also known as David Case) is superb. Davidson was so good at all types of books, but had a wry manner ideal for Wodehouse. And as usual for him, he animated each character with a distinctive voice and accent. The opposite gender provides the greatest difficulty for most readers, but Davidson did women extremely well. His only weakness was Americans, and there are two in this novel. But that is a very minor blemish on an audio experience you are bound to enjoy if you are one of those lucky few whose funnybone is perfectly within the sights of P.G. Wodehouse.

Published by Thriftbooks.com User , 21 years ago
...This book has nothing to do with nudity. The gist of the story is actually about a statue that is lost, and so the way the title can be interpreted is No Nudes is Good News. The content of the book tops all the funny books. The book is hysterical in its own way; the story is very satirical and has many twists and turns. Any one who reads it will enjoy it. :)

Practically Perfect in Every Way

Published by Thriftbooks.com User , 25 years ago
I don't think that Wodehouse wrote a book that I would not give a 10 to. Certainly none set at Blandings Castle. Blandings is the ancestral home of Clarence, ninth Earl of Emsworth, a scatterbrained man whose only true interest is his prize pig, the Empress of Blandings. The Pelican of the title is Galahad Threepwood, Lord Emsworth's younger brother and a former member of the Pelican Club. The Efficient Baxter does not appear in this particular book, but it does feature several impostors (which are common at Blandings), Lady Constance, the Earl's imperious sister, and two enormously complicated love affairs. Although that is more or less a description of any of Wodehouse's books (some have three or four love affairs) it doesn't make any of them less worth reading. He writes with wonderful humor and doesn't bother you with anything like social commentary.
Trustpilot
Copyright © 2022 Thriftbooks.com Terms of Use | Privacy Policy | Do Not Sell My Personal Information | Cookie Preferences | Accessibility Statement
ThriftBooks® and the ThriftBooks® logo are registered trademarks of Thrift Books Global, LLC