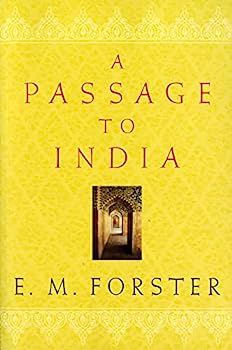 A Passage To India

E. M. Forster's exquisitely observed novel about the clash of cultures and the consequences of perception, set in colonial India Among the greatest novels of the twentieth century and the basis for... This description may be from another edition of this product.

Published by Iryna I , 2 years ago
Getting a glimpse into the society and life of that era.

Published by Thriftbooks.com User , 12 years ago
This book was for my wife for a class. It is fully footnoted and will be of great help for her in the class.

Published by Thriftbooks.com User , 13 years ago
This is a classic. I read it years ago and had forgotten the lush beauty of his language, the acuity of his vision and the wisdom of his conclusions. My daughter and I visited India more than 20 years ago, and it brought back the smells, the poverty and the lush beauty of the country. What I remember most is how kind Indians were to us. Incredibly giving, you never see a car or even a scooter that isn't crammed to the hilt with people. They share. Something we Americans seem to've forgotten. Anyway, it's a lovely book and, as I recall, a lovely film.

Forster's Best Work, a masterpiece on so many levels

Published by Thriftbooks.com User , 23 years ago
E.M. Forsters book "A passage to India" is indeed one of the best books I have ever read in my life. Forster shows great skill in bringing the tragic tale of an attempted friendship between Aziz and Fielding.The book revolves around what may be termed the secret understanding of the heart. This is an understanding of people, their feelings and their interaction with other humans. In a story which is not primarily political, Forster makes a political comment on what was happening in India at that time. The issue of the Marabar caves is not really an issue at all because even Forster says that it doesn't really matter what if anything happened in the caves, because it is the repercussions of what did of didn't happen that are important. I believe that the expedition into the Marabar caves merely amplified the emotions already inherent in the characters, for example Adela Quested tells us that she felt unwell since the teaparty with Fielding which took place long before the journey to the caves.Forster also presents us with well rounded characters except in the case of the Anglo-Indians, who are presented as tyrannical oppressors, and yet even they aren't all bad as they stand for values like honour and chivalry. What really annoys me about the Anglo-Indians is their high and mighty attitude, and pompous ways.I feel Forster uses character like Fielding, Moore, Godbole and Aziz to show us about true humanity.He doesn't pretend to understand India, it is a 'muddle' but through India he brings universal quandries and boundries to light.I recommend you read and reread this book as it is undoubtedly one of the best in english literature.
Trustpilot
Copyright © 2022 Thriftbooks.com Terms of Use | Privacy Policy | Do Not Sell or Share My Personal Information | Accessibility Statement
ThriftBooks® and the ThriftBooks® logo are registered trademarks of Thrift Books Global, LLC