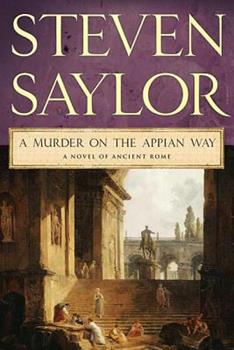 A Murder on the Appian Way

Torchlight flickers on the elegant marble walls. The sound of a mob echoes in the street. The year is 52 B.C. and the naked body of Publius Clodius is about to be carried through the teaming streets of Rome. Clodius, a rich man turned rabble-rouser, was slain on the most splendid road in the world, the Appian Way. Now Clodius's rival, Milo, is being targeted for revenge and the city teeters on the verge of chaos. An explosive trial will feature the...

Murder is the Roman way.

Published by Thriftbooks.com User , 19 years ago
So one would be led to believe after reading this book. Though the "mystery" in this mystery novel isn't quite as strong as I would have hoped, A Murder on the Appian Way" still counts in my eyes as one of Steven Saylor's better works.The story takes place in the year 52 BC, at a time when Rome was just beginning its slide into civil war and was inching towards the eventual fall of the Republic. Publius Clodius, a patrician turned plebeian demagogue, was brutally murdered on the road linking the capital to southern Italia: the great Via Appia (which, curiously enough, was built by one of his own ancestors, Appius Claudius Caecus). Called upon to look into the matter by Clodius' wife Fulvia and by no less a personage than Pompey the Great, an ageing Gordianus the Finder and his son Eco ride into the shadows beneath Mount Alba to discover the truth about the death of Rome's most controversial political luminary in years.The problem with using historical events as themes for mystery novels is that one looks at things with the benefit of hindsight. (A little research of your own will tell you just about everything that happens in the book.) Saylor's skill lies in his ability to make even foregone conclusions seem uncertain, especially with the introduction of possible alternatives and suspects one would not have even considered after reading the ancient sources. Hence, even though the mystery element tends to get swallowed up by the vastnesss of the novel's rich historical backdrop, one could always expect something interesting to happen towards the end.Although Saylor explains characters and concepts fairly well, knowing a tidy bit about such things as daily life, architecture and the politics of late Republican Rome will help a lot (when, for example, one tries to visualise such places as the Clodius house on the Palatine and the grand, rather cramped space that is the Forum Romanum). Having some prior knowledge about the political factions that existed at the time should also assist the serious reader when it comes to understanding the circumstances surrounding Clodius' death . . . but in the end, don't let the nitty-gritty details spoil your reading experience. Historical the basis may be, but the novel is a work of fiction nonetheless and is meant for entertainment above all else. And of course, you'd pick up a lot of things about Roman history at the same time.All told, "A Murder on the Appian Way" may seem more like a Colleen McCullough than an Agatha Christie: more history, less mystery. But that does little to dent the excitement and anticipation that builds up as one courses through this book, for one would feel as though he were right there on the Appian Way with Gordianus himself, riding into the face of danger and bearing witness to a murder that is not quite what it seems to be.

Does the Truth really matter?

Published by Thriftbooks.com User , 22 years ago
Does the Truth really matter? Murder on the Appian Way was a page turner. It wasn't your average murder/mystery novel, because the murder happened before you even start reading. I liked the way it revealed information in bits and pieces, through various characters here and there. It was also a mystery in a sense that you never knew who Gordianus was actually working for, or if he was working for anyone at all!?! The only thing I really didn't like about it was that there wasn't a real twist at the end of the novel. There wasn't a big "BANG", that made me stop breathing. The characters were interesting and intruiging, and the entire chaos at the beginning of the book, sparked the entire mood for everything that happened after. The entire time I was reading, I thought of how the crowd of angry Romans would react. My interest was very high until I actually found out the truth of who killed Clodius, I became uninterested after then because it seemed to me that it didn't really connect to the rest of the novel.

Published by Thriftbooks.com User , 22 years ago
Saylor makes history fun in his exciting novel "Muder On the Appian Way." Combining the ancient culture of Rome with an adventuous and creative storyline makes learning more enjoyable. I thought that, like the prequel "Catalina's Riddle", Saylor's book was fun and unpredictable. The story keeps you guessing at who was where, when and why! The story kept me wanting to read because I truely felt like I connected in some way to the book. Every time Bethesda, the mother of Eco, Meto and Diana and wife of Gordianus, is brought up in the story, she always reminds me of my own mother. - caring and occasionally worrisome. Saylor not only provided a great mystery story, he also developed the characters to a point where you, the reader, can almost feel like they know the person. I would definately reccomend this book and any of Steven Saylor's book to anyone!

Published by Thriftbooks.com User , 22 years ago
My name is Jon and I am a juniuor at Walsh Jesuit High School. In our Latin Class, we have just finished reading the captivating novel, "A Murder on the Appian Way," by Steven Saylor. As a project on this story, we are to take ten pictures depicting a scene or showing an overview of the story. This project will be quite interesting because this book is filled with amazing descriptions and absolutely superb writing. This amazing book swept me up in a sea of mysteries and scandals and showed how the persistance of one man(Gordianus) can ultimately lead to the truth. This story revolved around a clash between enemies that resulted in the death of a high-born citizen in the republic. Although many stories were told about how the fight that caused Clodius'(the man that was murdured's) death, Gordianus was sent to find the truth to what really happened. Through his many explorations, and his questioning of the few eye-witnesses, Gordianus begans to put a story together about what really happened. However, this story is just a decoy for the outrageous truth. Gordianus becomes involved in a mystery that will even test his ability to find the truth. In this absolutely magnificent story, Gordianus will take you on a wild ride where everyone is hiding something and where nothing is as it seems. I recomend this book to anyone who enjoys a good mystery with a suprise ending. Also, even if you don't care for mysteries, this book has many other qualities that make it a perfect book for anyone and everyone to read.

Published by Thriftbooks.com User , 24 years ago
In "A Murder on the Appian Way", Saylor takes the reader on a ride through some turbulent times in Rome, using his subtle humor and wit to a most satisfying conclusion. In this novel, Rome is the battleground for the rival gangs of the populist politician Publius Clodius, and his political enemy Titus Milos. Clodius is murdered on the Appian Way under mysterious circumstances and Milo is accused of the crime. The city explodes and the skills of Gordianus the Finder and his unique family are brought out to expose the truth -- which just possibly is not what anyone wants to know! A most compelling addition to Saylor's continuing Roma Sub Rosa series
Copyright © 2020 Thriftbooks.com Terms of Use | Privacy Policy | Do Not Sell My Personal Information | Accessibility Statement
ThriftBooks® and the ThriftBooks® logo are registered trademarks of Thrift Books Global, LLC