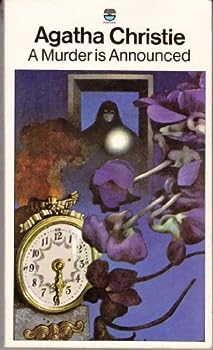 A Murder is Announced

(Book #5 in the Miss Marple Series)

A Murder is Announced in a small-town newspaper advertisement--and Miss Marple must unravel the fiendish puzzle when a crime does indeed occur.The villagers of Chipping Cleghorn are agog with... This description may be from another edition of this product.

One of her best books!

Published by Morgynne , 2 years ago
This book kept me interested the whole time; I loved the old-timey feel of the book and that it kept me asking questions all throughout. Definite recommend!

"Friends, Please Accept this, the Only Intimation..."

Published by Thriftbooks.com User , 13 years ago
This was the third book of Agatha Christie's that I read, and the one that cemented my opinion of her as an utterly ingenious storyteller. "A Murder is Announced" is a book that I can come back to again and again, noticing something different each time, and marveling at the amount of foreshadowing and carefully-placed clues that have been strewn throughout the narrative, so obvious in hindsight, yet so carefully woven into the story that it takes a keen eye to pick up on them. The residents of Chipping Cleghorn are astonished at an advertisement placed in their local paper, claiming that a murder is to take place in the home of Miss Letitia Blacklock that night. Even more strangely, Miss Blacklock is as baffled at the appearance of the announcement as the rest of them. The other residents of the house (a childhood friend, two distant relatives, a refugee and a somewhat mysterious boarder) all claim innocence, and so it is a rather bemused gathered in the drawing room once her neighbours converge on Little Paddocks for what they assume is a murder-mystery party. As the clock chimes the half-hour, the lights go out, and gun-shots are fired. When the confusion passes, someone is dead. Luckily the elderly Miss Marple is staying with a friend in the village, and offers her services to the police to help gather some more information about the people involved. What with the authorities having come to the shaky conclusion that the events of the night in question were some kind of botched burglary, the spinster-sleuth decides to do some of her specialized snooping. That is, she socializes with those involved, and draws parallels between the impression she has of them with the residents in her own village in an attempt to understand character, background and possible motivation. The amount of detail used in building the mystery is wonderfully complex, particularly in the dialogue: the second time around, I could pick up on the fact that several characters are saying completely different things to what we assume they are the first time. In hindsight, there are several early details that practically scream the solution at you, and even what first appears to be a typo is a clue! If you're sharp enough, you can certainly deduce who the killer is; as Christie lays out all the information...but then proceeds to baffle you with it. The general time-period of the story is informative without being obtrusive. Set in the years directly after WWII, we get the sense of a society still trying to find its footing after great turmoil, and coping with drastic changes in the world. Along with mention of ration books and identity cards, displaced refugees from Eastern Europe, the decrease in hired servants, illegal bartering system among neighbours, housing development and distrust of foreigners, there is a prevailing sense of uncertainty and hardship as communities try to rebuild their understanding of the world. One feature of the postwar world in particular has a

Published by Thriftbooks.com User , 14 years ago
What "improvements" have been made for the Black Dog & Leventhal edition? There are already major differences in punctuation, word choices, and scene breaks between the original Collins and Dodd Mead editions of this novel. There are further differences between the Dodd Mead editions republished by Random House/Avenel and the Dodd Mead editions republished by Simon & Shuster/Pocket. There are further additions still in the Signet, Bantam, and Berkley editions. For every publishing house putting out her works, there seem to be a new batch of editors altering Agatha Christie's words and the sound of her voice. What's the matter with these publishers? Whose voice do they think we want to hear when we sit down to a novel by Agatha Christie? And what will she sound like twenty years from now? It's frightening that her estate has failed to see the importance of guarding her words as she wrote them. Please tell me I'm not the only one here who senses that a crime has been committed.

A great mystery, one of the best ones ever written!

Published by Thriftbooks.com User , 16 years ago
When a personal item in the Chipping Cleghorne Gazette invites people to a murder at the home of Miss Blacklock, they show up to be part of the excitement. However, when a young man suddenly springs in on them with a revolver, and then quickly ends up dead, the party turns out to be anything but entertaining. The police are baffled as to what happened and why, and that leaves only one person who can unravel this mystery - Miss Jane Marple! Jane Marple was the literary creation of that most famous of English mystery writers, Agatha Christie (1890-1976). For those of you unfamiliar with Miss Marple, she was your stereotypical elderly spinster-lady, who loves to gossip and grow her flowers. But, even more, she has a razor-sharp mind that she uses to solve mysteries, using her own brand of lateral thinking that allows her see clearer than anyone else around her. This is actually Agatha Christie's fourth Miss Marple novel, written in 1950. (The first one was The Murder at the Vicarage (1930), and the second one was Sleeping Murder, which was written in 1940 but locked away to be published after Ms. Christie's death in 1976.) Overall, I found this to be a fascinating read. If you love a good mystery, then get this book - it is a great mystery, one of the best ones ever written. I give this book my highest recommendations!

Warning: This book can do major damage to your self-esteem

Published by Thriftbooks.com User , 20 years ago
I used to think that I was of above average intelligence.But after just finishing A Murder is Announced (the 7th Christie book I've read) I know differently.Each time I start a Christie novel I am sure that this time I'll be able to figure out whodunnit, and every time I fail.This book is just another example of Christie's mastery of the mystery. The story begins when an advertisement runs in the paper announcing a murder will take place in a small town. Naturally, the towns people are intrigued thinking it's just part of a game. Of course it isn't and when there is a murder Miss Marple is called in to solve the case. With great characters and an outstanding plot (featuring more twists than you can get your head around) this is Christie at her best.A must read for anybody interested in the genre

Published by Thriftbooks.com User , 20 years ago
Although first published in 1950 "A Murder Is Announced" by vaunted mystery writer Agatha Christie has lost none of its zest. Deemed a classic in its genre this suspenseful tale is ably represented by British voice and television actress Rosemary Leach. When invitations are sent reading "A murder is announced, and will take place on Friday, October 29th, at Little Paddocks at 6:30 p.m.," everyone, including the indomitable Jane Marple, would anticipate an unusual party game. Such as, someone will be chosen as the murderer, the room is darkened, and the victim meets his fate. It's not all fun and games when a real dead body is found. Miss Marple, on your mark! With her inimitable skill Agatha Christie allows listeners to enjoy solving the crime, step by step, just as much as Miss Marple does. Curl up in an easy chair and revel this remarkable tale wonderfully read. - Gail Cooke

A Murder is Announced Mentions in Our Blog