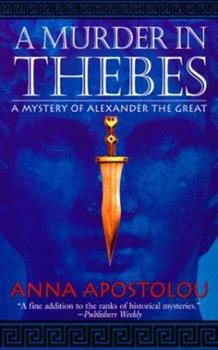 (Book #2 in the Miriam and Simeon Series)

Thebes has succumbed to Alexander the Great and the days following its fall are filled with murderous treason. Lysander and Memmon, Alexander's two favored officers, have been killed by a dangerous spy, and Alexander's rule is precarious until he solves the dangerous riddle of Oedipus' crown. Second in the series. Martin's Press.

Second Book in the Series

Published by Thriftbooks.com User , 15 years ago
This is a novel by Paul Doherty writing as he so often does under a pseudonym. Paul Doherty is the consummate professional when it comes to writing historical mystery novels. I for one do not know how he can be so prolific with his offering of books and yet make sure that each of them is well researched. Whether they be 13th, 14th, or fifteenth century they are always true to the period. He also writes about Ancient Egypt and now he has taken to writing about Alexander the Great. This is the second book in the Alexander mysteries. The books are very enjoyable as Paul Doherty's books always are, but in the case of these offerings, historically the truth may be bent more than a little, which may offend some purists, but the book is a novel and there to entertain rather than give a history lesson. Thebes has succumbed to the unstoppable war machine of Alexander the Great, and the days following are filled with murder and intrigue. Lysander and Memmon, two of Alexander's favourite officers have been killed by a dangerous spy, and Alexander's rule is precarious until he solves the dangerous riddle of Oedipus' crown.

Published by Thriftbooks.com User , 15 years ago
This is the second of Apostolou's Alexander the Great Mysteries. It takes place beginning with Alexander's capture and sacking of Thebes. The mystery was who killed the commander of the Macedonian garrison in the Cadmea prior to the attack, and who keeps on killing after the battle. There's also a side mystery about a crown of Oedipus in a shrine. This is good, but I think that A Murder in Macedon was better. The subplot about the crown was there to make the great king look bad, IMHO. All-in-all, not a bad mystery.

A murder in THEBES

Published by Thriftbooks.com User , 21 years ago
This book is a great "who-dunnit" that realates to the past. I can't belive how well Apostolou got all the information from the past and how she related it to the story. WELL DONE!!!

Published by Thriftbooks.com User , 21 years ago
This novel is set during the times of Alexandra the Great. The murder of two close officers, Lysander and Memnon, endanger Alexander's rule and to rid the danger he has to unravale the mysteries behind Oedipus' crown. Lysander was betrayed to the Thebans, who did it ? Memnon was in a guarded locked chamber yet fell to his death, who did it ? Macedonian sentires perished during the night, who did it ? Is the spirit of Oedipus reaving havoc on the Macedonian empire ? This is an exciting historical whodunit, chilling and entertaining with lively characters.

a neat and tidy mystery

Published by Thriftbooks.com User , 22 years ago
After reading the first book in this short lived series, I simply had to read the next one. A Murder in Thebes is not THE best mystery I've ever read, but it is was still a pleasing read. The heroine, Miriam, was a captivating character, however, Simione, her brother felt 2D. I especially appreciated the involvement of Alexander and the political intrigues in that period. Overall: worth reading if you're a fan of Alexander the Great.
Trustpilot
Copyright © 2022 Thriftbooks.com Terms of Use | Privacy Policy | Do Not Sell My Personal Information | Accessibility Statement
ThriftBooks® and the ThriftBooks® logo are registered trademarks of Thrift Books Global, LLC