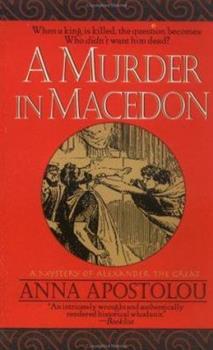 A Murder in Macedon

(Book #1 in the Miriam and Simeon Series)

Beware of Greeks bearing knives... In the summer of 336 B.C., Philip of Macedon has summoned all of Greece to join him in celebration in the old capital of Aegae. As he enters the arena filled with his loyal subjects, he is brutally stabbed by the cruel dagger of Pausanias, a young captain of his guard. Soon the palace corridors are awash in fear and chaos: Philip's ex-wife, the witch Olympias and mother of his son Alexander, plots the violent death...

A Good Read if not Taken too Literally

Published by Thriftbooks.com User , 15 years ago
This is a novel by Paul Doherty writing as he so often does under a pseudonym. Paul Doherty is the consummate professional when it comes to writing historical mystery novels. I for one do not know how he can be so prolific with his offering of books and yet make sure that each of them is well researched. Whether they be 13th, 14th, or fifteenth century they are always true to the period. He also writes about Ancient Egypt and now he has taken to writing about Alexander the Great In the days following the death of Philip of Macedon there is no guiding hand on either the people or the army, but waiting in the wings is Philip's son Alexander. Little do the people know that soon they will have one of the greatest men who ever lived leading them. Even his name will tell it's own story, Alexander the Great, also know as Alexander III, son of Philip of Macedon and Olympias, princess of Epirus, daughter of King Neoptolemus. Alexander set out to find the murderer of his father with the help of two Hebrew friends, Miriam and Simeon. Much will happen to them on the quest to seek out the slayer of Alexander's father. Some of the historical facts may offend the purists as they have been twisted beyond recognition in certain areas. But the book is a novel written to entertain and should be treated as such.

Published by Thriftbooks.com User , 19 years ago
I've seen Phillip's tomb, and early next year I'm starting in Thessaloniki and following Alexander's trail through parts of Turkey. So, I'm reading everything I can get hold of on Alexander. I enjoyed both Alexander books by Apostolou. I also read the two Alexander books by P.C. Doherty. I noticed some of the language in the two series's is the same. I've never come across the phrase, "He pulled a face" before, so I speculated they were the same author. It turns out, that's true. There have been a couple of negative reviews here from people insisting on historical accuracy and pointing out alleged flaws. OK. That's their right. Interestingly, the reviews on the Doherty side of the house are almost universally rave reviews. Fascinating.

Published by Thriftbooks.com User , 20 years ago
Historical mysteries are all the rage now, and so we come to the murder of a king in Ancient Greece, replete with conspiracy, intrigue, and witchcraft. Such novels are harder to write than regular detective novels: in addition to the mystery needing to be good, the historical aspects need to be good also. Here the author succeeds reasonably well, and the result is a good book, worth reading if you're interested in Greek history or mysteries.I had only a sketchy knowledge of the murder of Philip of Macedon prior to this book, but what I saw in the book was good. The king is killed during a public ceremony by one of his own guards, who is about to escape, but killed by the guards under circumstances that make it look as if he was never intended to escape at all. There's also another assassin who's been killed, further confusing things.The detective protagonist is the most interesting character in the book, a Jewish woman whose brother is a scribe for the king himself. Once the king is dead, Alexander (soon to be the Great) asks the woman and her brother to look into the murder, and what she finds is fun and intriguing. There's a spurned wife who indulges in witchcraft, and [unintellegent] son who seems harmless but is looking for a suspicious knife, a crafty old general who's scheming for power, a pair of brothers who are pretenders to the throne, etc. All of these are suspects, and Miriam, must sort through them and figure out who might or might not have done it.Miriam and her brother are interesting characters, and the solution is believable, if a bit far-fetched. I would recommend the book, and will be looking for the sequel.

Not historically accurate, but

Published by Thriftbooks.com User , 22 years ago
If I'd wanted historical accuracy I wouldn't be buying fiction. I liked the characters, especially Miriam, I liked the setting, and I liked the mystery. The solution given is quite plausible and, yes, I am going to read the sequel!

Published by Thriftbooks.com User , 24 years ago
Readers of P.C.Doherty under his own name and his various pseudonyms (Harding, Grace, Clynes, Dukthas) will be delighted to find that Anna Apostolou is none other than that very busy scribe! His capacity to put himself in any period of history and write great mysteries is amazing. This title is not being published in the U.K. so the U.S.edition is the only chance you will have of getting it.
Trustpilot
Copyright © 2022 Thriftbooks.com Terms of Use | Privacy Policy | Do Not Sell My Personal Information | Accessibility Statement
ThriftBooks® and the ThriftBooks® logo are registered trademarks of Thrift Books Global, LLC