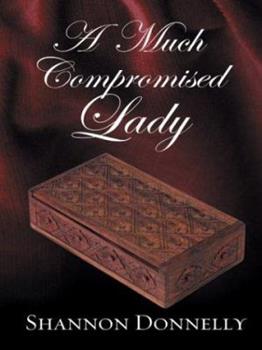 A Much Compromised Lady [Large Print]

(Book #3 in the Compromise Series Series)

1999 Winner of the RWA Golden Heart Contest Glynis Chatwin has dreamed of becoming a respectable lady for as long as she can remember. Uncovering evidence of her stolen birthright is her only aim when she hides in a deserted bedchamber - but proving that to worldly Simon Winters, whose bedchamber she unwittingly chose, may be difficult. Yet accepting the help of the wealthy, jaded, and bored lord in her search for the rosewood box that will establish...

The Cost of Respectability

Published by Thriftbooks.com User , 18 years ago
Beautiful Glynis and her brother, Christopher, have spent their whole lives on the road as care-free gypsies. But then their mother tells them the startling truth...their father was a lord whose inheritance was stolen from him by his younger brother. Their mother even believes that their uncle is responsible for their father's mysterious death. And thus Glynis and Christopher embark on a dangerous mission to learn the full truth of their shadowed past and gain their rightful inheritance. Their first attempt to steal the documents that prove their mother was indeed married to their father fails miserably, but throws Glynis into the path of the notorious Lord St. Albans. He is unable to forget her and determines to help the siblings on their quest...for reasons of his own.And so a story of intrigue and danger begins with few to be trusted and the stakes almost too high. But Glynis finds the greatest danger is her own growing feelings for the heartless rogue, St. Albans. Glynis is posing as his mistress in order to move in the same circles as her uncle...and St. Albans would like to make the arrangement real. Glynis should be outraged, but instead she more tempted than she thought possible. Could the price for her brother's respectability be her own?And just so you know, Proper Conduct by Shannon Donnelly contains the love stories of both Christopher and Bryn.

Published by Thriftbooks.com User , 19 years ago
"A Much Compromised Lady" is an extremely well written romance novel, that boasts of an interesting storyline and characters that engaged and held my interest. And while I'm more of a fan of Shannon Donelly's Regencies that are of the drawing room variety -- "A Compromising Situation," "A Dangerous Compromise" and "Under the Kissing Bough" -- I must admit that I rather did enjoy this romance novel. The story flowed evenly and at a brisk pace, and I finished the novel before I even realised it! However, I'll own that I did not care for the 'hero' of this piece very much -- Simon Winters, Lord St. Albans was a little too proud, autocratic and domineering for my taste. Fortunately, the heroine, Glynis Chatwin matched him in her short temperedness, hauteur, her own sense of self worth, and in her refusal to allow him to intimate her too much. Lord St. Albans's private hope that Glynis's claims to the Nevins name would prove to be a pipe dream, while refreshingly honest and probably accurate, also turned my stomach a little. Somehow, I found St. Albans to be a little short on charisma; and his arrogant and autocratic manner just made me feel bilious. However, I must applaud Ms Donnelly for her accurate and on the mark portrayal of this arrogant and autocratic character. For me though, the real 'hero' of this novel was Glynis's cousin, Bryn Dawes, who helps his cousins prove their claim, even though his help will cost him his inheritance. (I'm old fashioned: I prefer that my heroes be kind and honest and honourable instead of 'mad, bad and dangerous to know'). And I do hope that Ms Donnelly writes a book that features Bryn as the hero.On the whole though, "A Much Compromised Lady" is a read that should not be missed, as it more than lives up to its promise of adventure, intrigue and romance!

Published by Thriftbooks.com User , 19 years ago
If you're a steady reader of Regency novels, and wonder about all the autocratic dukes above ground during those days, this well-done and very witty book will provide a delightful respite. The author gives us a wonderful hero, who will out-duke any duke you've ever read about.Simon Alexander Derain Winters, Earl of St. Albans, Baron Winters, etc., etc., is totally unaccustomed to taking orders from anyone-even his King or the Regent. And the sooner his Gypsy gets that simple fact into her head, the happier everyone will be. Except that Glynis Chatwin, in spite of being found in the earl's bed-with neither of them very well dressed, in the bargain-will be no man's servant. She is on a quest-to establish the truth of her Gypsy mother's claim of marriage to a titled man-such proof needed to end, forever, the question of legitimacy for her and her younger brother, Christopher. The current peer, Francis Dawes, Lord Nevin, would much rather see the young woman hanged as a thief. From this rather unconventional beginning, a wonderful tale emerges. Their mutual desires bring Simon and Glynis (and Christopher) together in their search for the proof Glynis seeks. Simon will lend his not inconsiderable resources if she will only masquerade as his mistress. The battle of wills this engenders is very much a taming of the shrew, if only one could be sure of just who is the real shrew! The plot, which contains as much mystery as it does romance is engrossing, and you'll find yourself rooting for the satisfactory outcome that finally emerges, along with the romance. Both Glynis and Simon find themselves in strange situations, wondering how their original paths could have ended them up in such different locations, both physically and emotionally. Although the author states that this was to be the end of her 'Compromised' series, the new Lord Nevin is whispering otherwise. Good for him! More happy reading in store for the rest of us.
Copyright © 2020 Thriftbooks.com Terms of Use | Privacy Policy | Do Not Sell My Personal Information | Accessibility Statement
ThriftBooks® and the ThriftBooks® logo are registered trademarks of Thrift Books Global, LLC