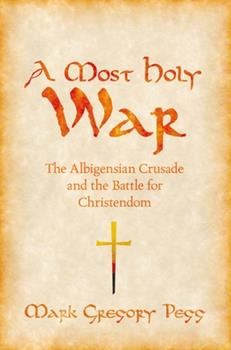 A Most Holy War: The Albigensian Crusade and the Battle for Christendom

(Part of the Pivotal Moments in World History Series)

In January of 1208, a papal legate was murdered on the banks of the Rhone in southern France. A furious Pope Innocent III accused heretics of the crime and called upon all Christians to exterminate heresy between the Garonne and Rhone rivers--a vast region now known as Languedoc--in a great crusade. This most holy war, the first in which Christians were promised salvation for killing other Christians, lasted twenty bloody years--it was a long savage...

Published by Thriftbooks.com User , 13 years ago
I very much enjoyed this book. I particularly appreciated being allowed to see the personal views of being a historian at the beginning to be considered while reading this well supported and detailed account of a turbulent period of history that provided the frame for a detached and sobering analysis and message for today at the end.

Published by Thriftbooks.com User , 14 years ago
Not all crusades in the Middle Ages were directed toward freeing the Holy Land from the "infidels". There was the "crusade" against the "heretics" in Southern France in the early 13th century that went on for years, as is told in this book. The Catholic Church was quite intolerant of those it felt did not completely conform to its tenets, and in this case aroused the martial ardor of lords and knights to stamp out what the Church considered incorrect doctrines. The crusade was religious on the part of the Church, but often the participants were drawn to it because of political and dynastic considerations. There was much bloodshed and cruelty on both sides, and even at that, the Church considered that it was doing God's work. Eventually it was believed that the wrongdoers were eradicated, and that the "true Faith" had triumphed. That's not exactly true, but it wasn't for lack of effort by the religious and secular leaders of the time. Has religion learned anything from this atempt to eliminate dissent in all of those centuries since then? Judging by today's world I don't think so!

A Most Fascinating Book

Published by Thriftbooks.com User , 14 years ago
Mark Gregory Pegg has written an excellent history of an episode that is often neglected in crusade polemics- the Albigensian Crusade. "A Most Holy War" was released on January 14, 2008, the 800th anniversary of the event that precipitated the crusade, the murder of a Papal Legate in Toulouse, France. Pope Innocent III was furious, and became convinced that the whole area was swarming with heretics, and that the Count of Toulouse, Raimon VI, was protecting them. The only way that the Count could exonerate himself from this charge was to "expel the followers of heresy from the whole of his dominion." Until then, the Pope said, "all those signed with the cross, the crucesignati, `in the name of the God of peace and love' and with `our promise of remission of sins,' must strenuously `root out perfidious heresy' and purify the land. `Attack the followers of heresy more fearlessly than even the Saracens,' was Innocent III's thundering conclusion, `since heretics are more evil!'" (p. 7) This obsession with heresy did not happen in a vacuum. Pegg gives a brief background of a new obsession with heresy that started in the 11th century. With a widespread belief in the end of days, there arose an eschatological vision that saw all heretics as linked in time and space. Of course, the concept of heresy hardly arose in the Middle Ages (see "There is No Crime For Those Who Have Christ"), but in the 11th century it took on a new apocalyptic significance. In the Toulouse area, there was a distinctive Christian sub-culture that, among other things, rejected the bodily resurrection, original sin, and baptismal regeneration. These people were seen as a plague that threatened Christendom, and so there was a moral obligation, according to the Pope and his crusaders, for mass murder. Pegg shows how a fanatical insistence on purity of thought and doctrine led to a turning point in history, that helped to usher mass slaughter for the sake of purity (genocide) into Western thought. "The most holy war is a story of grand expeditions, heroic sieges, village insurgents, kings trampled to death, children set on fire, heaven and earth remade- it is the epic story of the battle for Christendom." (xiv) Pegg's work is essential for anyone wanting a work on a forgotten crusade, which pitted Christian against Christian.

Published by Thriftbooks.com User , 14 years ago
This book tells the story of the Crusade launched against the Cathars in the 13th century by the Pope who delcared his intention to whipe out slavery. Accused of being Arians or alternatively influences by the Zaroastrians, the Cathars were a people that lived in southern France and were Christians but not adhering to the Pope. The Crusade led to their destruction. Like other books such asA Great and Noble Scheme: The Tragic Story of the Expulsion of the French Acadians from Their American Homeland, this book examines the notion of genocide and ethnic-cleansing today in a past example of it. THe truth is, however, that these historical episodes are not progentiors of the Holocaust. They are interesting, but mass ethnic-cleansing was a fact of history. The movement of peoples had made them a fact of life. The desturction of the Albignian crusade was not unique. Nevertheless, when one gets around the preaching and theorizing about its impact, this is an interesting subject. Seth J. Frantzman
Trustpilot
Copyright © 2022 Thriftbooks.com Terms of Use | Privacy Policy | Do Not Sell or Share My Personal Information | Accessibility Statement
ThriftBooks® and the ThriftBooks® logo are registered trademarks of Thrift Books Global, LLC