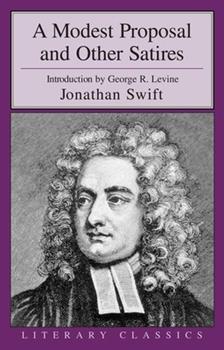 A Modest Proposal and Other Satirical Works

Jonathan Swift (1667-1745) has been generally acknowledged as the greatest English satirist. In a prodigious stream of letters, pamphlets, tales, and essays, he assailed, with irony, erudition, and savage wit, several of the abuses and vices he saw around him, including political corruption, religious intolerance, hypocrisy, and the decline of learning. These selections from Swift's greatest writings include some of his best-known pieces against organized...

A Logical (but absurd) Answer to a Dire Problem

Published by Megan R. , 3 months ago
This essay gives us a logical answer to the problem of starving families. Why not just eat the children? I know it sounds ridiculous; it is supposed to be ridiculous. What is so remarkable about Swift is, he takes the most absurd solution to this issue and somehow creates an argument for it that makes sense. It seems the most logical course of action in that situation. No money is required, they can start right away, and they have a large amount of children to be eaten. It is, not only, a great social commentary: we should help our poor, rather than squabble over pork in our bills, as our politicians seem so inclined to do. It also shows us the necessity of navigating problems and crises not just logically but also morally. If we lose the sanctity of life then this very well could make sense to us, to eat our own children. Overall, a marvelous essay on these two issues that are very topical today.

At war with the dunces

Published by Thriftbooks.com User , 16 years ago
Famous now only for "Gulliver's Travels," Swift proves more cogently in his other satires that he is the English master of irony. For example, there is nothing remotely modest about what he proposes in "A Modest Proposal," which is that Irish people who are starving because of English economic policies should remedy their situation by eating their own children, boasting the added benefit of reducing the number of "papists." Like an eighteenth-century George Carlin, Swift is funny just for the blatant outrageousness of his words, but there is also a truthful undercurrent in much of what he says. Swift, hereditarily an Englishman born in Dublin who became an Anglican minister and who was eventually sent back to Dublin--"exiled" as he called it--for the remainder of his life, made himself a mouthpiece for the Irish people and a gadfly to any authorities who he felt overstepped their bounds. In his "Drapier" letters, he warns the Irish not to take any wooden nickels; that is, to reject the base-metal currency being foisted upon them by the English in order to scuttle their economy. In his poem on "The Legion Club" he hurls hilarious verbal salvos at members of the Irish Parliament who are selling out to the English, caricaturing them as monsters and demons. "A Tale of a Tub" goes everywhere, but the main narrative thread is an allegory of the Reformation. Three brothers, Peter, Martin, and Jack, inherit a fortune from their father and proceed to conquer the world, but entrapment by the vices (personified as women) incites them to squabble and results in a schism in which Martin (Luther) and Jack (John Calvin) leave Peter (the Roman church) for their own haunts. Interspersed throughout this tale are playful swipes at literary critics and pedants, including a fantasy on the professional windbags known as the Aeolists. Harold Bloom has called "A Tale of a Tub" the best prose work in the English language, and furthermore has said that he reads it on a regular basis to punish himself, which I think speaks volumes even if you don't value Bloom's opinion. Religion is naturally one of Swift's concerns. He generally likes it, but he has the sensibility to say, "We have just enough religion to make us hate, but not enough to make us love one another." He advocates religious sobriety; in the "Mechanical Operation of the Spirit" he ridicules fanatics who claim to be able to communicate with God. His "Argument Against Abolishing Christianity" offers solid rationale for preserving the institution, one reason being that the criticism of it is the only forum which allows certain writers to exercise their rhetorical talents. This edition also contains a short list of Swift's epigrams, at least one of which has achieved some notoriety: "When a true genius appears in the world, you may know him by this sign, that the dunces are all in confederacy against him." Mostly these are observations of human nature and its folly, and while not all may resonate

Published by Thriftbooks.com User , 18 years ago
Satire is sadly lacking in today's society. Satire holds human vices and folly up for ridicule. Swift is not advocating the economy of eating babies, but maybe the fact that they are currently eating the body parts of aborted fetuses in China seems to steal something from Swift's modestly porposed satire-or maybe it is too outrageous seeming to be true. Nevertheless, this is a brilliant work by a brilliant writer. It should be required reading. It is a pristine example of satire. Should we stop choking deaths by improvising starvation-- seek a new president by electing children? Satire is a genius' way of entertaining social change-literally. Although, sometimes though, even what once seemed impossibly satiric does not remain-which is proof of human folly.

Published by Thriftbooks.com User , 20 years ago
"A Modest Proposal", by Jonathan Swift, is a biting satire about life in 18th Century Ireland, in which the author seeks to find "a fair, cheap, and easy method" to transform the sick and starving children of Ireland into productive members of society. Swift's proposal, hardly modest, is to fatten up undernourished poor children and then sell them to more well-to-do families as food. By presenting this outrageous concept as an interrelated string of seemingly logical arguments, Swift leads the reader to understand that his proposal could simultaneously solve overpopulation and unemployment, save the poor from having to spend their meager resources on raising children, provide the poor with desperately needed extra income, and also give the wealthy access to a yet untapped high-protein delight. Of course, Swift is writing tongue-in-cheek, to shock the reader into rejecting his outrageous negative proposal and instead formulate a more sensible positive one. Although written in 1729, Swift's essay is still relevant in the 21st Century. For a really good and very quick read that repulses, amuses, and challenges you to think, I highly recommend this classic work.

A Humorous Satarical Outlook on How to Escape Poverty

Published by Thriftbooks.com User , 23 years ago
Picture this. The next presidential candidate for the United States presidency asks welfare citizens to eat their children so they can escape poverty. Not only would the opponent win a landslide victory, the candidate would probably be hounded and hunted by the rich and poor alike. Now, imagine the engaging British author Johnathan Swfit penning the peice entitled " A Modest Proposal," where he asks parents in Ireland to eat their children for they are high in nutrition and by eating them, the parents will help hinder the threat of overpopulation. It appears to be gruesome and make a mockery of the Irish people, until we dig depper into the satirical peice to see that Swift was trying to convey the starvation and oppresion of the Irish people by writing the peice in an English publication as well as a time when you were either for England or for Ireland, but never both. Swift's humorous outlook is really an expression of disgust to the circumstances that surrounded the Irish under a harsh tolatarian English rule. He succesfully engages the reader through humor as well as a fascinating argument where he encourages the reader to agree with his argument. I enjoyed " A Modest Proposal" because it had elements that other satries on the same subject lacked, humor. Swift is succesful at what he does because he does not tell the readers outright the conditions of the Irish people, but he weaves it skillfully into the essay, creating a fascinating, funny, and sharp essay.

Should be required reading for all students!

Published by Thriftbooks.com User , 24 years ago
Anyone who thought they understood the "Troubles" in Ireland should read this essay. One of the best examples of satire to be had in any dialect, Swift writes his "proposal" in language that is clear even to todays jaded audience. Every English professor/instructor should make this required reading.
Copyright © 2020 Thriftbooks.com Terms of Use | Privacy Policy | Do Not Sell My Personal Information | Accessibility Statement
ThriftBooks® and the ThriftBooks® logo are registered trademarks of Thrift Books Global, LLC