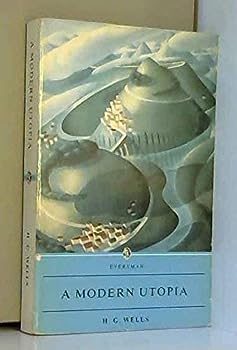 This description may be from another edition of this product. In A Modern Utopia , two travelers fall into a space-warp and suddenly find themselves upon a Utopian Earth controlled by a single World Government. For more than seventy years, Penguin has been the...

Published by Thriftbooks.com User , 13 years ago
First off, let me say, I think H.G. Wells is one of the best authors of all time. But when it comes to designing examples of human society he needs help. For example - to keep people employed they are sent to where the labor is needed. They are given just the minimum, shelter and food and clothing, for what is looked at as the minimum of work. In other words, a labor force of wage-slaves, forced to move around the planet at the needs of the factories and businesses. If you HAPPEN to be educated enough or hyperactive enough to do more than the normal amount of work you can gain more or, in the case of women, be allowed to have kids. And if you are really smart, healthy and active you can become Samurai - nobles of the world. The end results sounds more like a system set up in the Middle Ages, with most of the labor moving to where the jobs are, a small middle class of above normal workers and a class of supermen, and some women, at the top. I am sorry Wells, but this is not a Utopia. Even after talking about individualism and the equality of women in the end this more like a nightmare, and a boring one at that. You should read it, because many modern books on utopias and dystopias will use it as part of the background on the subject. But I don't think anybody should really talk about it as a serious system of World Government.

A Utopia for Diverse People

Published by Thriftbooks.com User , 14 years ago
_A Modern Utopia_ (1905) by H.G. Wells deals with two men who are transported instantaneously to a distant planet that is physically identical to Earth. However, this planet contains a worldwide, kinetic, and socialistic Utopian society that differs radically from that of our own world. Wells dispenses with some of the disbelief involved with a certain amount of charm: The whole world will surely have a common language, that is quite elementarily Utopian, and since we are free of the trammels of convincing storytelling, we may suppose that the language to be sufficiently our own to understand. (17) Perhaps the first thing to note about _A Modern Utopia_ is that it contains some very perceptive criticism of Utopian literature: There must always be a certain effect of hardness and thinness about Utopian speculations. Their common fault is to be comprehensively jejune. That which is the blood and warmth and reality of life is largely absent; there are no individualities, but only generalised people. In almost every Utopia-- except, perhaps, Morris's "News from Nowhere"-- one sees handsome but characterless buildings, symmetrical and perfect cultivations, and a multitude of people... without any personal distinction whatever. (9) Does _A Modern Utopia_ escape these problems? Perhaps not entirely. But it comes close to doing so. First, there are the characters. The visitors to Utopia are the narrator, a portly, middle-aged version of Wells and a rather petty botanist, who is constantly mooning about a shallow romance of his youth. Shortly after they enter Utopia, they meet a blond-haired, sandal-shod, back-to-Nature spokesman (modeled on William Morris), who has nothing good to say about Utopia. Shortly before their departure, the narrator meets his double, a member of the _samurai_, or ruling class of Utopia. Other members of Utopia include a bewildered innkeeper, a polite but efficient bureaucrat, assorted criminals and social failures, an amiable supervisor of a toy factory, various students and business people, and W.E. Henley (who proves to be as irascible in this world as in ours). Wells's point is that his Utopia is populated with _individuals_-- and not all of these individuals are noble, wise, and virtuous. There must be restrictions in this Utopia, but there also must be flexibility enough to allow for some freedom and individual differences. Wells also gives a certain amount of attention to architecture and engineering. He describes in some detail an Alpine inn, a train, a hostel in continental Europe, and some streets and buildings in the city of London. Wells envisions all of these structures as essentially modern in style. We can understand why Wells, writing at the turn of the twentieth century, might have a strong reaction against the ugliness and dirtiness of Victorian architecture. But readers living at the turn of the twenty-first century have lived for some time with modern architecture. They may be forgiven for feeling l

A Utopia for real people

Published by Thriftbooks.com User , 14 years ago
In narrative style, this is about the oddest Utopia story I've seen. It alternates almost seamlessly between the usual kind of Utopian fiction and a here-amd-now narrative in a voice that seems to be Wells's own. In the here-and-now, the speaker ponders the human state and reasons closely on an idealized world that still has room in it for fallible, real people. Then the thought gels, and the fantasy world comes to life to play out the points discussed. A companion joins our speaker throughout the story, fact-like and fantastic parts both, and embodies plenty of the human condition that would need to be accomodated: in need of immediate gratification, given more to involuntary emotional reaction than to thinking, and self-centered in a way that's blind, innocent, and pervasive. As promised in the title, it's modern in ways that many more recent Utopias aren't. Wells considers the unavoidable inequality of child-bearing duties, and turns full-time motherhood into a paying profession. He acknowledges acquisitiveness and cupidity - rather than wide-open warehouses, his Utopia uses money to add wisdom (or at least thought) to the choices made in what to take home. He discusses race and racial superiority in terms that his 1905 audience would have found familiar. In the end, he argues for economic and legal equality not on the grounds of actual equality, a point that he leaves undecided, but on the grounds that no group in history has ever shown that it deserved to hold the upper hand. There's more, much more, including a wealth of references to other Utopian literature - that by itself might almost have justified the cost of this book. Wells's interleaving of multiple levels of fiction also makes for an unusual reading experience. But it's the ideal world itself that stands out, mostly by not standing out. Real people didn't set out to create a bad world, so most of what we've worked out has a lot going for it. Above all, what we've got has room in it for many kinds of people, not all of whom will or can devote themselves to some moral ideal. "A Modern Utopia" is complex and layered in its presentation, but equally complex in what might look like banality of solutions to pressing social problems. Social improvement mattered too much to Wells for him to let it seem glib or impossible. -- wiredweird

A Modern Utopia Mentions in Our Blog