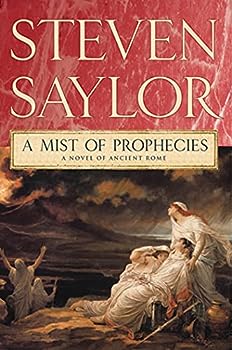 This description may be from another edition of this product. During the Roman Civil War, as the forces of Pompey and Julius Caesar fight a series of battles in the provinces over control of the Republic, Rome itself is a hotbed of intrigue as those left behind...

Best in the Sub-Rosa Series!

Published by Thriftbooks.com User , 18 years ago
"Mist of Prophecies" is the latest installment of Steven Saylor's Sub-Rosa series. Immediately it is one of his best and most enjoyable works to date. The book is good enough to be read on it's own but is best enjoyed by checking out the previoius 2 novels, "Rubicon" and "Last Seen In Massalia", (Checkout the great review by the reviewer Booksforabuck.) Changed by the vicissitudes of time, we see our protagonist, Gordianus the Finder older and more worldly and confronted with the tragic death of his intriguiging lover Cassandra. A seeress of unknown origin who dies in his arms and who's prophecies were urgently sought after by some of Rome's leading matrons. At the funeral, no one attends except the very same group of women observing the funeral rite from a discrete distance. Here is an excellent view at the behind-the-scenes look at the feminine Roman mindset. There are numerous flashbacks that reveals the plot and Gordianus' state of mind in an interesting way that is at once personal and prosaic. Notice, as we age it is natural to reminisce and Gordianus does that in a such a way to make his dilemma of loss and pain all the more real and convincing. Looking back at the past plots from the earlier books (makes you want to re-read, the Venus Throw and Murder On The Appian Way), brings Mist of Prophecies in sharp focus to the state of affairs in Rome, (the fall of the Republic) and the rise of Ceasar. The similarities between ancient Rome and our world and are so close that there is much to consider; economic upheavals with a poplulation deep in debt, war, rogue politicians causing trouble and plenty of grandstanding and intrigue to keep you awake at night. A must read. Enjoy!

A superior blend of history and imagination.

Published by Thriftbooks.com User , 19 years ago
In the hotbed of intrigue that is Rome in 48 BC, Caesar is away chasing Pompey in their struggle for Empire, the populous is divided in their allegiances and life goes on. The wives, daughters, lovers and family members of the power brokers of Rome are all caught up in this most recent tale of Gordianus the Finder. It is a departure from the last two books in the Roma Sub Rosa series that concentrated on political maneuverings and military operations, now returning to a more "human" centered tale involving the women of Rome; giving a face to historical figures that went without more than casual mention in the histories written by men, for men, about men.This is probably Steven Saylor's most non-linear novel to date. It weaves back and forth through the events surrounding the murder of his latest case, who also happens to be his mistress. The story telling has been taken to a new level in this novel, and Steven Saylor deserves the highest accolades for his work here. Am I being too enthusiastic? I think not. A truly wonderful tale that is highly recommended.

Different to the rest

Published by Thriftbooks.com User , 19 years ago
Saylor's latest offering is remarkably different to the rest of the Sub Rosa series. The format, the prose-style, the characterisation and the historical basis move well away from the preceding set.Indeed this is the first of the novels that doesn't directly use a 'mystery' set in actual fact. At the time of the novel Caesar was about to meet Pompey at Pharsalus in 48 and Saylor only uses the references to the relatively unstable calm to place a date for this mystery. There is some dragging of historical 'fact' of the praetor Caelius in this year before Caesar's dictatorship and in some respects the tired old man ambience that permeates the entire book could be seen as echoing the sudden death of the Republic.The book takes the form of alternating chapters set in the present, as Gordianus investigates the poisoning of the ex-troupe artist/seer 'Cassandra' and the past with a series of snapshots of Gordianus' interactions with her. The denouement is reversed, actually taking place at the beginning of the novel with the mundus (Saylor actually gives some subtle direction as to where the guilty party lies) and then moves on to explain what happened.As in most of Saylor's novels it is the motive that is of utmost importance, that and Gordianus' relationship to both deceased and affiliators. We see a man struggling to accept his age and he changing times he lives in. His relationships and his reality are laid open bare to see.I suspect that Meto will make a 'return' to good graces in the future, Davus is broadly hinted at as possessing acute mental faculties and the continuance of Hieronymous is excellent. Bethseda's illness neatly places a sense of pathos into the proceedings.So, the novel: very different, as excellent as ever. However, you can't help wondering what is going to happen to the Sub Rosa series as time continues to pass for Gordianus.

Published by Thriftbooks.com User , 19 years ago
Mr. Saylor once again creates a masterpiece that allows that individual not familiar with the history of Roman Empire to slip through time and experience a fascinating culture. Mr. Saylor's offering to his readers is not only on par with the excellent standards he established for himself in previous works in this genre but exceeds the expectations of his readers. One experiences the sights, the smells, the thrill of political intrigue, the desperation of a man advancing into years and trying to convince himself that he is, if not the man he once was, not the elderly individual he believes others see him. If I taught a course in this time period, I would want to use one of Saylor's novels for supplemental material. He is concise and historically accurate and a pleasure to read.

Another fine addition to a great historical mystery series

Published by Thriftbooks.com User , 19 years ago
Steven Saylor's "Roma Sub Rosa" stories, the adventures of Gordianus the Finder, continues to be one of the very best historical mystery series ever written. Not only is the history accurate (the First Century BCE as the Roman Republic shatters), the characters are three-dimensional and convincing, and the reader cares what happens to them. Often a mystery series will grow tired after several books, the plots becoming predictable and the relationships among the characters increasingly trivial. Not so with the "Roma Sub Rosa" tales. We continue to care about Gordianus the Finder and his family, even as new tensions tear them apart."A Mist of Prophecies" takes place against a backdrop of the war between Julius Caesar and Pompey the Great. Although these two rivals are off stage in this novel, their agents are active in Rome, creating a dangerous urban jungle. And perhaps even more perilous for Gordianus the Finder, the chaos unleashed by the war has prompted others to also grab for power, whatever Caesar and Pompey might do. Into this turmoil steps the beautiful, mad seer Cassandra who proves irresistable to Gordianus, beset by financial ruin, family discord, and the mysterious illness of his wife. As much as I like this novel, I must discourage readers unfamiliar with Saylor's books from beginning with "A Mist of Prophecies." This is a series where the characters grow and their relationships evolve. So, start with "Roman Blood" and go through the rest in chronological order. And when you finish "A Mist of Prophecies," then you can wait with me for the next!
Copyright © 2020 Thriftbooks.com Terms of Use | Privacy Policy | Do Not Sell My Personal Information | Accessibility Statement
ThriftBooks® and the ThriftBooks® logo are registered trademarks of Thrift Books Global, LLC