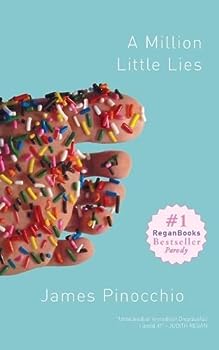 by James Pinocchio and Pablo Fenjves

James Pinocchio wakes up in the back of a New York City taxi with a combination lock piercing his left ear and no idea how it got there, or what the combination is. The following day, his wealthy... This description may be from another edition of this product.

Published by Thriftbooks.com User , 13 years ago
If you didn't read A Million Little Pieces, this book probably won't make much sense. I found it hilarious. Oh, and by the way...Frey didn't "embellish." He lied.

My Heart was in a Million little pieces!

Published by Thriftbooks.com User , 13 years ago
I intentionally did not read this book following the Frey/Oprah scandal. I waited a couple of years and then read the book, how I think it should be read with no anticipation or expectation that the story is true or Frey's life story, but simply as a story. With that being said, I really enjoyed "A Million Little Pieces". The story relates the tremendous journey towards recovery for James Frey. The story begins with James waking up on a plane with no idea where he has been or what he has done. What he does know is that he is missing several teeth, covered in urine, throw-up and blood, and obviously in a lot of trouble. Taken to a rehab facility by his family, we see James attempt to understand why he has done some of the things that he has done, as well as make some of the decisions that he has made. With the new mantra ....."I am an alcoholic. I am a drug addict. And I am a criminal", James takes responsibility for his past actions, sets limits for his future sobriety and sets out to heal himself as only he can. Not a believer in the "12 step program" or a "higher being", he has decided to get sober on his own terms and in his own way. Along the way, James encounters a variety of people with the same issues of alcohol abuse and drug dependency. Among them: his friend and eventual roommate, clarinet playing Miles (a recovering alcoholic and federal Judge), Leonard (a drug addicted, alcoholic Mafia Boss), and Lily (a pill popping, crack addicted prostitute) who he loves unconditionally. He also makes a connection with Joanne, his counselor and her companion Hank. From the time we learn that James is going to have a double root canal (to fix his teeth that were broken during a blackout) without any pain killers (because he is a recovering addict), to his 22-page confession of bad decisions, rage and embarrassment, we HOPE that he will heal and become whole. So when we read that James stares as a mug is literally being "carried thru the dishwasher", which to me symbolizes his rediscovery of himself, we know that he will honor his pledge to get clean. Like the "mug" he had to experience rock bottom, go thru hard and challenging times to become a better person. I personally enjoyed the story, and while I have not personally experienced addiction, I know several who have. This gave me some insight into the process of getting better. So while the story may not have been true, I thought it was extremely entertaining.

Published by Thriftbooks.com User , 16 years ago
James Pinnochio's hysterical parody of James Frey's "A Million Little Pieces" will cause any reader who followed the Frey controversy to collapse in giggles. Starting with the cover art of a baby's foot covered in ice cream sprinkles, and extending through every Frey nuance, "A Million Little Lies" is just one funny book. I highly recommend this book to anyone who is looking for a good laugh.

Published by Thriftbooks.com User , 16 years ago
Laugh out loud funny. As someone married to someone who went through a treatment facility and read the horribly annoying A Million Little Pieces, I LOVED LOVED LOVED the tongue-in-cheek humor. Well written. A fun read.

I drink Pinot Noir. I Dance. I am Garbage.

Published by Thriftbooks.com User , 16 years ago
'A Million Little Lies' may look like a cheap James Frey parody thrown together in about a week by some hack hoping for a quick buck -- and it is -- but the hackwork is so funny and captures Frey's pseudoliterary ticks so exactly that I laughed out loud on the New York subway. This resulted in a seat becoming available. Thank you, James Pinocchio!
Trustpilot
Copyright © 2022 Thriftbooks.com Terms of Use | Privacy Policy | Do Not Sell or Share My Personal Information | Accessibility Statement
ThriftBooks® and the ThriftBooks® logo are registered trademarks of Thrift Books Global, LLC