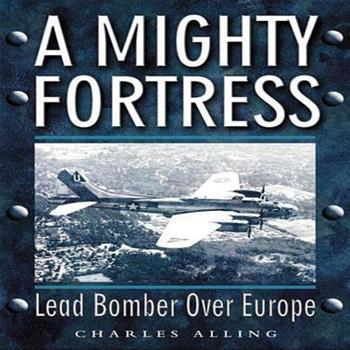 A Mighty Fortress is the personal account of the Captain and crew of a lead bomber in the enormous formation raids made by the 8th Airforce during the last few months of the Second World War. It is an extraordinary tale of heroism and bravery on the part of the entire crew of just one B17 amongst hundreds - but the one B17 that meant most to them. Flying a total of 27 missions before the war came to an end in May 1945, Alling tells, with great restraint,...

Probably the most inspirational book about WW2 ever written

Published by Thriftbooks.com User , 16 years ago
Captain Chuck Alling masterfully recounts his experiences as pilot of the 34th Bomb Group's lead B17G bomber during the last two years of WW2. "A Mighty Fortress" should be required reading for every military officer and is a "must read" for anyone interested in the Mighty Eighth Army Air Force's operations against the Third Reich. As a retired officer and military historian myself, I believe "A Mighty Fortress" is most probably the most inspirational book about WW2 ever written.

Published by Thriftbooks.com User , 18 years ago
It has been my privilege to have personally known for the last 25 years, the bombardier on this plane, Bill Wright. It was a joy and a thrill to read of the previously unknown heroics of Bill and his crew. The world has been blessed that these men were spared the plight of so many of their comrades. Bill, and I am sure others mentioned in this book, have lived exemplary lives and have positively influenced so many young men and women. Their miraculous survival, so vividly described in this masterpiece, is only surpassed with what God has allowed these men to do with their spared lives. Knowing this should only add to your enjoyment of this book.

The ultimate triumph of "the greatest generation"

Published by Thriftbooks.com User , 18 years ago
Candidly written by Charles Alling (a pilot of the 8th Air Force and recipient of the Distinguished Flying Cross and the Air Medal with four Oak Leaf Clusters during World War II), A Mighty Fortress: Lead Bomber Over Europe is a personal memoir of the final months of World War II when Alling was flying B-17s in combat over Germany. Harrowing danger, the heroic and strenuous efforts of a coordinated flight crew, the horrors of war, and the ultimate triumph of "the greatest generation" fill this captivating autobiography from beginning to end. A Mighty Fortress is highly recommended reading and a welcome addition to the growing Military History library of World War II eye-witness memoirs and autobiographies.

A Mighty Fortress is a mighty good book!

Published by Thriftbooks.com User , 18 years ago
Very much worth reading - Charles Alling's A Mighty Fortress gives us unique insights about leadership and bravery during the latter half of World War 2, and how a young lad was thrust into the epicenter of some of the toughest and most dangerous bombing missions flown over Germany. Thoughtul, sensitive, poignant, and very real history.

Published by Thriftbooks.com User , 18 years ago
Charles Alling has provided us with a unique and totally human view of strength, courage, discipline and compassion. From the first pages we see the depth of character and leadership that so many young men and women were forced to develop in the opening chapters of WWII. I was moved to tears by the poignancy of the delivery, and was fascinated by the extraordinary will, skill and good luck that the crew of the Miss Prudy experienced, while calmly following orders and putting themselves in great peril. A strong sense of spirituality permeates Mr. Alling's prose, as well as devotion to country and to his loved ones. The successful completion of 27 missions over enemy territory, most of which are chronicled, was in itself a huge achievement, and the reader is put directly into the cockpit of a B-17. If you have read Tom Brokaw's "The Greatest Generation," you will see in Alling, his crew and colleagues other examples of sheer greatness. The book is easily read, very hard to put down. (I read it in about four hours) The descriptions put "living color" into impressions which had been, for me, black and white. These guys had, to borrow a phrase, "True Grit."
Copyright © 2020 Thriftbooks.com Terms of Use | Privacy Policy | Do Not Sell My Personal Information | Accessibility Statement
ThriftBooks® and the ThriftBooks® logo are registered trademarks of Thrift Books Global, LLC