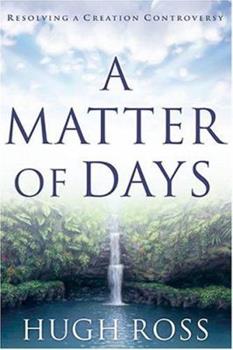 A Matter of Days: Resolving a Creation Controversy

An old-earth view takes on the challenges of young-earth proponents through a study of history, Scripture, and nature-and a testable creation model. This description may be from another edition of this product.

If you read the book you have to admit its right

Published by Thriftbooks.com User , 18 years ago
The people who rate this book low are wrong. I read the book cover-to-cover and when I look at the negative reviews, I can tell that those people definitely didn't read the book. They're just coming up with hate mail. Very sad to see Christians doing that. But the book all by itself makes sense! Mr. Ross is a real scientist and a real Christian and he understands both science and the Bible really well. Unlike the so-called Christians who are writing all the hate mail about him, Mr. Ross doesn't attack anybody. He just sticks to the facts. I hope anyone who wants to know the TRUTH will read this book. Obviously the people who write all the wild crazy stuff in the reviews did NOT read the book. You will learn a lot about how there are other parts of the Bible that talk about creation, too. And that it isn't a compromise with the devil to believe that the creation that God made really does tell us about God. Mr. Ross tells us that the Bible is the error-free word of God. He says that God does not lie in God's creation. If we pay attention to the Bible and to God's creation, we will understand God better. The Bible doesn't make scientific statements. But Mr. Ross shows that good science that has proven true shows that the Bible is true.

AT LAST- A Rational Response to Young Earth Groups

Published by Thriftbooks.com User , 18 years ago
In this outstanding book, Dr. Hugh Ross gently yet firmly responds to the young earth community's (YEC) strange Biblical exegesis, and even stranger "flat earth" science approach to the creation of the universe. Without compromising Biblical inerrancy, the author makes the Biblical and scientific case for the "big bang" and long creation days, and at the same time responds to every major YEC claim. Absolutely outstanding! At last, the Christian community has an authoritative, well documented response to this huge YEC embarrassment.

Published by Thriftbooks.com User , 18 years ago
As a former member of the YEC camp, I highly recommend this book. It presents the scientific and biblical evidence in a clear understandable manner. Very importantly, Dr. Ross holds to the inerrancy of the Bible and communicates the harmony between the Scripture and what we observe in nature. Also Dr. Ross' desire for peace and reconciliation among believers, over the age of the earth issue, truly reflects the heart of Christ. The written and verbal accusations hurled at Dr. Ross by some in the dwindling YEC movement are uncalled for. I highly recommend this book.

A Matter of Days

Published by Thriftbooks.com User , 18 years ago
"A Matter of Days" could also be titled, "A Matter of Interpretation" because this is what this book is really about-a matter of which interpretation of the biblical and natural record is the correct one. The hub of the controversy involves the meaning of a creation 'day' as noted in Genesis. Young earth leaders claim that each creation day was strictly a 24-hour period. Do their claims have solid proof- or does the data point to the days of creation to be long epochs? Utilizing historical, biblical, theological and scientific data, the author Dr. Hugh Ross helps the reader answer this question. Surrounding the 'hub' of the controversy are lightening strike subjects like, "Doesn't belief in an old earth equate a belief in evolution?", "Was there any kind of death before the fall of Adam?", "Does the Bible speak of a "big bang" of creation?" and "Is God's plan a restored paradise (like Eden) or a whole brand new creation?" Mindful of people's feelings about each of these subjects, the author masterfully and humbly leads the reader to logical conclusions.I would say that the last chapter really shows how fair Dr. Ross is willing to be with such a controversial subject of 'Old Earth vs. Young Earth'. He recommends that the church and the world outside evaluate the different creation models in an objective, easy to apply and understandable way. He notes that effective models help explain how and why particular phenomenon arises and that they are capable of predicting future discoveries and anticipating breakthroughs. With this in mind, the author provides two sample, non-exhaustive models of the Young Earth view and Old Earth view respectively. This provides the reader an objective way to analyze, over time, which model best represent reality. This book is like a breath of fresh 'common sense' to anyone who has been touched in some way by the controversy. I highly recommend that you read it.

Published by Thriftbooks.com User , 18 years ago
The latest book by Dr. Ross treats the age of the earth controversy in a way most of us cannot - with repect and charity. But this book doesn't just tell us why the old earth view is more plausible from a scientific standpoint, although it does that well. Dr. Ross does several things unique to the whole controversy.He not only uses science to support his interpretation of Genesis, he uses the Bible itself. He takes us out of Genesis One (a stronghold for those of young earth persuasion) and into other creation accounts in the Bible showing that they too support an old earth interpretation. And he is not bound by the English translation, but goes right to the Hebrew translations of eminent world-class Hebrew scholars.He also does the correct thing at the end of the book by laying out predictions. If the young earth interpretation of Genesis is correct, then there are many things that will be revealed in the coming years (e.g. there will be fewer and fewer scientists accepting the big bang model, or, more actual scientific evidence will support a thousand-of-years-old universe). On the other hand if the universe is old, more and more evidence will be revealed to support that (e.g. radiometric dating will prove more accurate and reliable, the big bang model will stand up even stronger under new evidence, etc.)Here is my prediction: The dyed-in-the-wool young earth creationists will not read it, but they will reject it as heretical, never the less. Many people who are undecided will read it and because of the beautiful logic, ease of reading, and Dr Ross' general tone of reconciliation and harmony and his uncompromising love for God, will be convinced that both the Bible and what we see around us in nature are from the same One.
Trustpilot
Copyright © 2022 Thriftbooks.com Terms of Use | Privacy Policy | Do Not Sell or Share My Personal Information | Accessibility Statement
ThriftBooks® and the ThriftBooks® logo are registered trademarks of Thrift Books Global, LLC