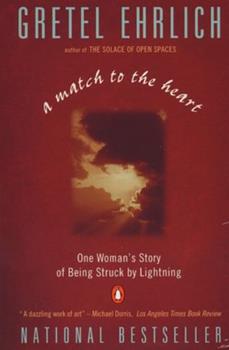 A Match to the Heart: One Woman's Story of Being Struck by Lightning

A powerful chronicle of a wounded woman's exploration of nature and self After nature writer Gretel Ehrlich was struck by lightning near her Wyoming ranch and almost died, she embarked on a painstaking and visionary journey back to the land of the living. With the help of an extraordinary cardiologist and the companionship of her beloved dog Sam, she avidly explores the natural and spiritual world to make sense of what happened to her. We follow as...

What a long strange trip...

Published by Thriftbooks.com User , 14 years ago
Four not five because it won't change my life; four not three because I'm happy to own it and suspect I'll be wanting to read it again. Local libraries didn't have a copy within reach, and I was impatient after two people recommended the book to me in two days. Life = recovery from major injury is like that (like what Gretel describes in the book). My own path involves art, and a lightning strike, and doctors who thought Ativan was appropriate treatment, and a long winding trip back where every stage feels like progress, only until more progress is made. Lightning changes the way you process the world. That experience is conveyed in the book but it's possible some readers might not recognize that is some of what they're reading. Agreed, there's not a lot of hard science. That wasn't available in 1994. The book wanders. Forcibly re-wired brains do that. Skim the part that doesn't catch your attention; the topic shifts are generously marked. The book is self-centered. Illness and injury will do that to you. Stories of recovery that trace the reality of how long and slow the journey can be are useful. Match to the Heart may well be a book that gets passed on to friends in need of that knowledge.

Published by Thriftbooks.com User , 14 years ago
This stunning book is about a woman who was struck by a bolt from the blue and lived to learn from it--and to teach others what she has learned. As a story, the plot is simple: a woman is walking with her dogs on her Wyoming ranch when she is struck by lightning. Gravely, almost fatally injured, she begins a two-year battle back to health, helped by parents, friends, a doctor, and a dog. But this almost surreal plot, compelling as it is, is not the most fascinating aspect of this quite remarkable book. What happens when you're struck by lightning? Here is how Ehrlich tells it: "I woke in a pool of blood, lying on my stomach some distance from where I should have been, flung at an odd angle to one side of the dirt path. The whole sky had grown dark. Was it evening, and if so, which one? How many minutes or hours had elapsed since I lost consciousness, and where were the dogs? I tried to call out to them but my voice didn't work. The muscles in my throat were paralyzed and I couldn't swallow. Were the dogs dead? Everything was terribly wrong. I had trouble seeing, talking, breathing, and I couldn't move my legs or right arm. Nothing remained in my memory--no sounds, flashes, smells, no warnings of any kind...When thunder exploded over me, I knew I had been hit by lightning." Erlich spent the next months on the brink of death, her nervous system seared almost beyond repair, trying to find a doctor who knew enough about the effects of electrocution to help her heal. That part of her search was facilitated by her parents, who took her to California and located an extraordinarily caring cardiologist who began to work with her. With his help, Ehrlich began to understand the physical consequences of a lighting strike. As a reader, I was fascinated with this aspect of her experience: what happens in the heart, in the brain, and throughout the body when millions of volts of electricity surge through the human system, short-circuiting the delicate human network. Her need to know became so strong that it later led her to witness open-heart surgery, to become a "traveler, a Marco Polo who had arrived in a place so exotic, few had seen it before." In her effort to satisfy this compelling need to understand and explain, Ehrlich explores the phenomenon from all angles. She studies the thunderstorms "that keep the global circuits going." She talks with others who have been similarly injured and found a growing network of survivors. She attends a conference and listens to the stories of 65 others, many far more disabled than she, all committed to the need to share, to transform society's ignorance about the dangers of electrical shock. Afterward, she reflects on "those humans who had awakened after being hit and became shamans and healers, and wondered what this new life of mine would be, carved from a ruined body and a ruined marriage, and what special passageways I could hollow out as in a labyrinth of dead ends." Lightning always follows the path of l

Published by Thriftbooks.com User , 14 years ago
it was a good present for my uncle who has been struck by lightning.

Published by Thriftbooks.com User , 22 years ago
I chose to read this book simply because I've enjoyed Ehrlich's style and prose previously. I did not expect to learn so much about human physiological response to electrical injuries, and how unknowledgable and unresponsive the medical community is to those persons who suffer such injuries. This is an excellent source book for persons who have suffered electrical injury,for both the description of the vagarities of symptoms, with Medicine's inability to measure such injures by traditional testing, and for the reassurance offered by naming victim support groups. As a medical professional, I have offered this book to several persons who have suffered electrical injury, and it has helped them cope.

Published by Thriftbooks.com User , 24 years ago
My book group sustained a spirited discussion of A Match to the Heart. Some found Ehrlich's exposition seriously lacking the heart she writes about, while others were satisfied that we weren't going to get to know Dr. Blaine Braniff, cardiologist, any better. All of us appreciated the very fine writing. Ehrlich's intricate metaphoric musings make this a great selection for a book group looking for non-fiction focused on nature, the human body, a little Buddhism, and a dog named Sam
Trustpilot
Copyright © 2022 Thriftbooks.com Terms of Use | Privacy Policy | Do Not Sell My Personal Information | Accessibility Statement
ThriftBooks® and the ThriftBooks® logo are registered trademarks of Thrift Books Global, LLC