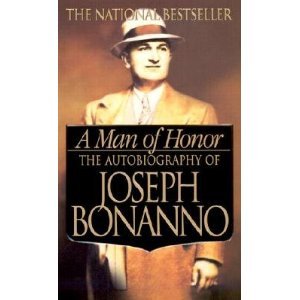 by Joseph Bonanno and Sergio Lalli

"Friendships, connections, family ties, trust, loyalty, obedience-this was the 'glue' that held us together." These were the principles that the greatest Mafia "Boss if Bosses," Joseph Bonnano, lived by. Born in Castellammare del Golfo, Sicily, Bonnano found his future amid the whiskey-running, riotous streets of Prohibition America in 1924, when he illegally entered the United States to pursue his dreams. By the age of only twenty-six, Bonnano became...

An inside look on the Mafia by the number 1 Mafia Boss of NY!

Published by Karla B. , 3 years ago
The TV shows and Movies do not ever do justice to the Mafia, after reading this book. Joseph Bonanno was the Leader of the New York Mafia in the 1920's & 1930's. It was quite an enlightening book. He makes his life story seem so normal, except for the fact he was instrumental in killing many people. If you want to read a factual story on the Mafia and it's NY Leader, then this book is the one to read!

No sworn statement but still an amazing story

Published by Thriftbooks.com User , 14 years ago
Who you lookin' at? That's as Italian De Niro can get. Expect the same kind of flavour when reading this book and then add some extra hot sauce. You have to be aware this book was written by a mobster who considered himself a man of honor. What you think of the world is the way you are raised and how you live your life. This book shows a great deal of information about the way of Sicilian life in the early 1900's and the booze-jammed 20's and 30's in the U.S. To read about that is fun alone, but reading about mobsters and their organization is even more exciting. This is a personal story, told by the man who reigned over Italian America for a great deal of time. Ofcourse, Bonanno has nothing to do with leading all organized crime he tells us. But you know how Italians like food, so add a pinch of salt to this book.

more to the matter

Published by Thriftbooks.com User , 19 years ago
The book is well written and very interesting. But it seems to sugarcoat the "mafiaoso" world. Where are the stories of violence that the "Tradition" is known for? Incidents like cutting off ears and fingers, horseheads in beds, general thievery and intimidation. Is all that just Hollywood embellishment or did Mr. Bonanno perfer to leave the unsavory side of Mafia life out of his book?

How a true GodFather thinks about his world

Published by Thriftbooks.com User , 21 years ago
Mr.Joseph T. Bonanno has written a great book about his world.A once honorable society.He had been a GodFather in.And about how it has now been truned into something other than it's supposed to be.In the last years the so-called men of honor have truned it into something diffrent.

A Man of Tradition

Published by Thriftbooks.com User , 22 years ago
An excellent book on what a Man of Honor is really about. The clash of old world tradition and the world of new American vaules can be readily seen here. You come to appreciate the values born in Sicily to these family men. The reasons this kind of man followed those values and the way in which he managed his American Family. This is a very refreshing change from the normal MOB/Mafia books that have been published previously. A must read for those was really want to understand of the true meaning of a Man of Honor.

great book, this is a milestone!!!

Published by Thriftbooks.com User , 24 years ago
Are you tired of reading books written by the FBI /or DEA? Get this autobiography written by the boss himself. Many details, many photos just great. Be careful, some information might not be correct (Joe was not stupid and wrote stuff that could have caused trouble!!!)
Trustpilot
Copyright © 2022 Thriftbooks.com Terms of Use | Privacy Policy | Do Not Sell or Share My Personal Information | Accessibility Statement
ThriftBooks® and the ThriftBooks® logo are registered trademarks of Thrift Books Global, LLC