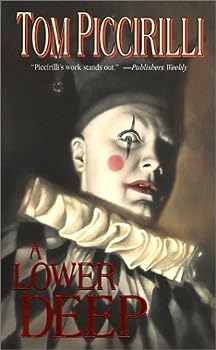 This description may be from another edition of this product. A man known only as the Necromancer and his demonic familiar named Self wander the spectral highways of the countryside, incurring the wrath of both heaven and hell -- and facing the curses of the...

Published by Thriftbooks.com User , 19 years ago
Some people might think this one is more "dark fantasy" than pure outright "horror" do to all the magical and occult elements to the story, but this story is truly a chilling one. A Lower Deep is broken into three sections and each one tells a separate story of how the nameless narrator and his demon companion Self get into big trouble with both the forces of good and evil. Like religion itself, all of the characters in this novel are conflicted over exactly what is right and wrong, and which "evils" might be a part of hell's greater plan or God's. The ending is an outright stunner involving the Archangel Michael, the possible resurrection of Christ, and the prophecies of Revelation (including the Red Dragon). An exceptional novel.

Published by Thriftbooks.com User , 20 years ago
Rarely have I read a novel so packed with bizarre characters and situations. The story follows a modern day warlock and his demon sidekick named "Self" (what a trip) as they struggle with their old coven master who has started a series of supernatural events that will culminate in Armageddon. Our hero must battle a new coven, fight a half-angelic mutant being in the bowels of a haunted abbey, and hunt through Jerusalem where the God's power seems to be boiling over. There are also demons, djinn, evil monks, ghosts, and the walking dead along for the ride. Piccirilli uses and comments on faith, history, theology, folklore, prophecy and other so-called "large spiritual matters" but does it in such a way that the story rolls along at a rip-roaring pace. The writing is solid, poetic, and completely gripping. The author's imagination is fiery and wild, but his skills as a writer hold everything in balance. There's humor here, relationships, love, vengeance and heartbreak. One of the best horror novels I've ever read. More Self!

Published by Thriftbooks.com User , 20 years ago
A LOWER DEEP is a wonderful occult horror novel where research into mythology, religion, the black arts and history has paid off in a fine way. This book reads with a particular sense of realism no matter how bizarre the situation. We follow a nameless man known only as the Necromancer as he and his demonic and sarcastic companion "Self" travel across the world battling evil abroad and the evil within themselves. From an unholy mansion where a witches' coven attempts the premature resurrection of the messiah, to a haunted monestary where insane monks roam, to the city of Jerusalem itself where the protagonist must fight the ghosts of his past as Armageddon approaches. This is top-notch horror fantasy that brings the concepts of belief, sacrifice, faith and antiquity to a unique life. Highly recommended.

Finally, a "Self" novel!

Published by Thriftbooks.com User , 20 years ago
For years Tom Piccirilli has been publishing short stories featuring an unnamed "Necromancer" and his demonic familiar "Self," who wander America and find supernatural evils just about wherever they go. Their history is long, complex, and entwined--the Necromancer tries to overcome his more impulsive "Self" and fight for the side of good, although, as we learn, sometimes Heaven is just as fouled up as Hell. Now Piccirilli's brought us the first novel featuring this duo and it's been well-worth the wait. In A LOWER DEEP the two are forced to confront their old coven leader, Jebediah DeLancre, who wishes to force the premature return of Christ. Though the Necromancer is opposed to this, Jebediah dangles an offer that can't be refused: the resurrection of the Necromancer's one true love, Danielle. The original coven was destroyed during a horrifying ritual gone wrong, and now the ghosts of those members plus new witches from a second order either aid or attack the Necromancer along his path. Eventually he finds himself at Mount Armon, a monestary where even more creepy events occur, as a little boy harbors occult forces and an infant may be sacrificed to bring life to a Nephilim, an abominable creature devoid of soul that is half angel and half human. The abbot and monks of Armon must take sides as unfolding circumstance seem to signal Armageddon. This leaves the Necromancer and Self no choice but to head to Jerusalem, where they attempt to fight against the end of the world. But is "Self" actually there to help or is he truly in league with Hell? Piccirilli keeps us guessing as he unveils a well-researched and sprawling tapestry of black rituals, mythology, paganism, witchcraft, Judeo-Christian beliefs, and a multitude of characters who are confused, terrified, and trapped by their own intentions as the apocalypse approaches. Piccirilli writes with a fluid, punchy, gripping narrative voice, but despite all the horrific events occurring there's often an edge of humor as "Self" sarcastically quips along. Highly recommended.
Copyright © 2020 Thriftbooks.com Terms of Use | Privacy Policy | Do Not Sell My Personal Information | Accessibility Statement
ThriftBooks® and the ThriftBooks® logo are registered trademarks of Thrift Books Global, LLC