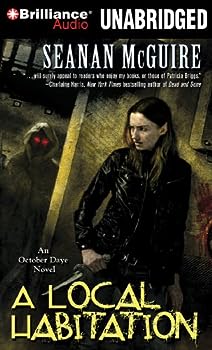 (Book #2 in the October Daye Series)

This description may be from another edition of this product. New York Times -bestselling October Daye series - Hugo Award-winning author Seanan McGuire - "Top of my urban-paranormal series list " --Felicia Day October "Toby" Daye is a changeling, the daughter...

ALH is A+ Urban Fantasy/Mystery

Published by Thriftbooks.com User , 11 years ago
"Giants and witches, fairy-tale monsters...those are for heroes. For everything else, they have people like me." ~October "Toby" Daye I said it in my review of Rosemary and Rue; I tend to not be fond of fae mythos in general because it makes my brain hurt. I ALSO said that I really liked Rosemary and Rue, the first book in the October Daye series, despite it...and despite myself. Well, with A Local Habitation, I may have to stop saying it altogether. I don't know what it is about Seanan McGuire, but she makes me like (if not totally understand) fae mythos. That's pretty darn impressive. In ALH we pick up with October "Toby" Daye six months after the events of Rosemary and Rue, and her liege, Duke Sylvester, has called on her to check out the well being of his niece, Countess January, who has fallen off the grid, so to speak, and who rules a small annexed territory between two counties that share hostility for each other. Toby sets out with Quentin, the young noble foster Daoine Sidhe we met in R and R, to find out if January's okay and why she's fallen out of contact with her uncle. Everything they find when they reach their odd and curious destination just begs more questions than it answers, however, and what answers they do find make absolutely no rational sense. Of course, when it comes to Faery, it doesn't have to make sense to kill you - and the things that make the least sense are always the things that kill you the fastest. And that's just another day in the life of Toby Daye, Daoine Sidhe changling and PI. Old friends and new abound in this book, and much to my delight, the fae world according to McGuire is fleshing out quite nicely...if in mostly terrifying ways. ALH is a tightly paced, tightly packed, and gut clenching mystery that I found quite a bit more satisfying than even Rosemary and Rue - and that's saying something. Toby is a great character, and I find myself liking her more and more. I completely appreciate a character who isn't ever going to be the strongest, fastest, or best at anything, and in fact, as a changling (half-fae, half-human) straddling both worlds will always leave Toby at a severe disadvantage. But she just keeps on keeping on in such gritty, spirited, kick-butt ways that I have nothing but respect for her. In ALH we get to see a more philosophical side to Toby in those rare down times when she's taken a minute to breathe (or recover), and they're intrinsically appealing, because I really started to get a sense both of who she is as a person, and how she thinks. She's the quintessential anti-hero. She knows it, she accepts it, and she likes that about herself. It adds a breath of fresh air to the characterization and makes her a lot of fun to read. And joy of joys, the King of Cats is back, and the scenes between him and Toby literally sing with potential tension. Tybalt keeps doing things that indicate he doesn't feel as antagonistic towards Toby as she has claimed since the beginning, yet she hasn't see

Brings something new to the genre!

Published by Thriftbooks.com User , 11 years ago
The general idea of the October Daye books is one that's been told time & time again. Scrappy halfling fights against a deck that's stacked against her while potential love interests (one who may be good for her, one who may not) circle her. However many times this has been told, McGuire manages to breathe new life into something that should (by all accounts) be an idea that would be nothing new. In the second book of the series, Toby's liege Sylvester has asked her to check in on his niece (January O'Leary) in another County who hasn't responded to any of his calls. It sounded like it would be an easy task, but somehow Toby suspects that it won't be nearly that easy. She soon discovers that January's County has a murderer on the loose- one that manages to make Toby's unique talent of reading blood invalid. With an unknown threat stalking everyone at every turn, it'll take all of Toby's resources to discover who or what is causing the deaths. I think part of what I really enjoy about this series is that the main character *isn't* all powerful. She's a halfling with limitations & with the exception of a *very* slight power-up in the last book, her power level remains the same. Toby can do things that others can't, but her power level doesn't rise or get leveled up to god-like powers. Anything magical that needs doing, Toby has to figure out a way to do so within the scope of her powers. With so many series out there having their main characters double or triple (or more) their power levels within the first few books, its refreshing to see someone attempt to keep their character's power level at realistic levels. (For now, anyway. Its possible that Toby might get powered up in future books, but I get the impression that if it happens it will be excellently done.) The plot in this is incredibly interesting & it really fleshes out some of the rules & protocol of McGuire's fae court system. It also explores the night haunts & what they are, which I loved. If you are someone wondering if there will be any steps towards resolving Toby's love life or her difficulty with her ex-husband & daughter. In those aspects the book is at a standstill, but in all fairness- they weren't the subject of the book & there wasn't time for Toby to really focus on such things. (The Tybalt/Toby shipper in me still hopes for a favorable resolution, though!) If you liked the first book, you'll love this one. Plus with the next one coming out in September 2010, neither you nor I will have to wait very long for our next Toby fix. If you haven't read the previous book, I highly recommend doing so. There's enough previous plot mentioned to where new readers will be slightly confused as to what went on previously.

Published by Thriftbooks.com User , 11 years ago
As mentioned in other reviews, reading Rosemary & Rue first is extremely helpful, if not necessary. However, unlike many sequels, this is not just a rehashing of the same themes. The book manages to be its own book, despite being a sequel. The story has a very different feel -- more suspense, less action sequences. The setting moves from the big city to a small hi-tech company in a fairly small town (Fremont). Anyone who has ever worked at a small office will identify with the themes, as Toby Daye uncovers the truth beneath the "we're all friends" veneer.

My favorite urban fantasy series by far--and ALH is even better than the first installment!

Published by Thriftbooks.com User , 11 years ago
After the events of ROSEMARY AND RUE, October "Toby" Daye is still trying to put her life back together. However, when Sylvester, the Duke of Shadowed Hills, needs Toby to go check in on his niece in the politically charged climate of Tamed Lightning, things are about to get rough again. Toby has to solve a murder before losing everything she went to Tamed Lightning to protect. Firstly, I have to recommend only reading this series in order. So if you haven't yet picked up and read ROSEMARY AND RUE then I highly recommend giving the series a shot. After all, Seanan McGuire is quickly becoming one of my more favored authors of urban fantasy; I'm a tough girl to please. Secondly, for those of you who have read ROSEMARY AND RUE, I have to say: A LOCAL HABITATION is even better. All the things that made ROSEMARY AND RUE such a strong debut are still there: the wonderfully damaged heroine, the melancholy story, the gritty details, the perfect rendering of San Francisco, unique and varied fantastic creatures, and I could go on a long while. However, I would say without hesitation that A LOCAL HABITATION improves in many of these areas. Whereas I found the mystery interesting in the debut novel interesting, I thought A LOCAL HABITATION was compelling. I don't normally count myself as a mystery fan, but I literally found myself asking, "I wonder who did it?" Toby Daye is probably one of my favorite protagonists in urban fantasy. Although the character does run across the slightly annoying characteristic of attracting every male she comes in contact with, it's forgivable because of how solid of a character she is otherwise. As I mentioned in my ROSEMARY AND RUE review, Toby's back story is uncommon and McGuire writes the damage that results in Toby well. I suppose Toby's trauma and difficulties are a lot of what draws me to the character. The reader is given a real chance to experience Toby's life--as rough as it is--and see her grow and heal. And she has quite a bit of healing left to go. When the reader meets her in ROSEMARY AND RUE, she's at the lowest point in her life and she's steadfastly trying to improve conditions in her own way. A LOCAL HABITATION presents a Toby that's slightly recovered, but still broken in man ways. I only can hope to see more of the healing process in Toby in the next book. I'm not sure how McGuire managed it, but Toby is really a character that I find myself wishing the best for--Toby certainly deserves it. A LOCAL HABITATION begins to explore relationships that are only introduced in the first book. Tybalt, Connor, and Quentin all get much larger roles. My only real disappointment in this installment is there's not barely a mention of the family Toby lost. Although I can understand that not being the focus of the novel, I should think that a loss that traumatic would be enough to warrant a bit more discussion. I am very glad to see Tybalt play more of a role, though. Of all the men posturing in Tob

Published by Thriftbooks.com User , 11 years ago
I echo the previous reviewer's recommendation: you should read the first book, Rosemary and Rue, before reading this one. I don't know that it's 100% necessary, but your experience reading this one will be so much richer. I'm not going to do a full description here, but suffice it to say that Toby gets pulled out of her own element (San Francisco) and thrust into another mysterious situation. Seanan McGuire's writing is top-notch, with evocative descriptions, great world-building, and fun moments of humor, even (and especially) when things get pretty dark. (That's when you need the relief the most!) The overall mystery was deep enough to sustain my interest throughout. One of the little sub-mysteries was pretty obvious to me from the get-go, but I understood why Toby wouldn't have figured it out right away, so that's a very small niggle. McGuire has a deft touch with writing good relationships, too... and not just romatic ones, but friendships and familial ones as well. I'm very happy that the next book comes out in 6 months. Not that this one ends on a cliff-hanger, but I'm interested in watching how all of Toby's relationships unfold, and in finding out more of how this world works.
Copyright © 2020 Thriftbooks.com Terms of Use | Privacy Policy | Do Not Sell My Personal Information | Accessibility Statement
ThriftBooks® and the ThriftBooks® logo are registered trademarks of Thrift Books Global, LLC