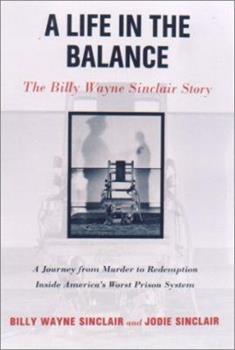 A Life in the Balance: The Billy Wayne Sinclair Story

Sentenced to death in 1965 at age 20 for an unpremeditated murder during a bungled holdup of a convenience store, Billy Wayne Sinclair spent his first seven prison years on death row. When the death penalty was abolished, his sentence was commuted to life. Three-and-a-half decades later, Billy Wayne is still behind bars -- feared by many politicians and prison officials for his well-known incorruptibility and unrelenting crusade for prison reform.This...

Published by Thriftbooks.com User , 18 years ago
The Billy Wayne Sinclair StoryReviewed by: Richard R. BlakeFrom the first page to the last, the reader is drawn into the life of Billy Wayne Sinclair. Sinclair relates how he was beaten and abused as a child, entered a life of crime as a teenager, and was convicted of murder, in 1965 at the age twenty. The writing is superb. Descriptions are graphic. Sinclair was originally sentenced to death. His sentence was reduced to life in prison in 1972 after the U.S. Supreme Court voided then-existing death penalty laws. Gov. Buddy Roemer commuted his sentence to 90 years in 1992. Events that span over thirty-five years are related in a narrative that details multi layers of political corruption in the Louisiana State Prison System. After years of operating on a code of loyalty established by prison inmates, the author took on a personal code of ethics. Sinclair, at great personal risk has been unwilling to compromise these new values and has exposed avarice, crime, and corruption within the parole and corrections community. This is must reading for all elected officials in community, state, and national politics and anyone involved in prison administration, prison reform or prisoner's rights. I highly recommend this book.

A Life In The Balance

Published by Thriftbooks.com User , 20 years ago
This is the best book I've ever read, hands down. It gave all the facts, good or bad, along with the consequences. I do not usually have sympathy for prisoners but this is an exception. This is a perfect example of the people in charge being more corrupt than the prisoner. It shows that trying to do the right thing after making a mistake in your youth only results in more punishment and the corrupt people win. It is a sad thing to know that our leaders in politics are so often more corrupt than the prisoners. I would love to read another book by the Sinclairs telling "the rest of the story". I admire Jodi Sinclair and I'm not sure anyone else would have this dedication after all the "knockdowns" in her life. I wish them the best life has to offer in their future. They have paid enough.

Published by Thriftbooks.com User , 21 years ago
Billy Wayne Sinclair murdered a store clerk in a robbery in Baton Rouge, Louisiana, in 1965. The clerk was a former football star, and the "politically powerful football fraternity" made his initial imprisonment as deprived as possible, and for thirty-five years has acted against any parole actions. Sinclair tells his life story in _A Life in the Balance: The Billy Wayne Sinclair Story_ (Arcade Publishing). It is full of distressing events during his upbringing and during his decades of imprisonment, but it is devoid of self-pity. Sinclair landed on Death Row in Angola, "the bloodiest prison in America." He became a "fanatic devotee" of self discipline. He began studying law on a daily schedule. "I learned to lock my mind on living, to believe that I had a future... The Row taught me patience. It burned away my habit of recklessness when I grew frustrated in the pursuit of a goal."Readers who can stomach Sinclair's descriptions of an abusive upbringing by a sadistic father and his descriptions of prison life will find some bright light in this dark tale. Angola was "a world of racial strife and hatred; homosexual rape and slavery; protection rackets that provided a way for the strong to live comfortably at the expense of the weak; and widespread drug trafficking that brought its dealers tremendous profits and its users an escape from the bitter reality of their failed lives." In this dismal environment, Sinclair continued to study, and became a jailhouse lawyer, helping many of the other criminals. He became an editor of the penitentiary's newsmagazine, _The Angolite_, and helped change it from an innocuous newsletter to a serious prison publication with journalistic standards. It won journalism awards and played its part in bringing reforms to Angola. Sinclair continued his life as a whistle-blower, and while it gained him respect, it also led to recriminations from the authorities and continued balking at his parole attempts. When he challenged the corruption within the inmate society, his life was at risk. He wrote the book with his wife of nineteen years; it is clear he loves her, but it is a mystery why she, a television news reporter, entered into a jailhouse marriage. Nonetheless, they have produced a book that is graphic, powerful, and unforgettable. As Sinclair went through losses within the prison system, he gained empathy about the loss of life he had caused in a punk robbery decades ago. He has seen the worst of humanity as captors and captives, but he also has distinct admiration for some of the exemplars on both sides. He has had decades with no disciplinary write-ups, has served prisoners and prisons with needed reforms, and has seen multiple murderers begin their sentences and end them while he trudges on. His disturbing and inspiring book is a tale of redemption, but the redemption is incomplete. If nothing changes, he will be eligible for release in 2011.

Published by Thriftbooks.com User , 21 years ago
There have been lots of books and movies about life behind bars, but this is the real thing. Written by an articulate, intelligent, convicted murderer and his wife, it tells the true story of the horrors and contradictions of life in a real prison, a terrible prison.The first half of the book details Billy Wayne Sinclair's life on Death Row, then on the yard at Angola Penitentiary after his sentence was commuted to Life due to an anomaly in the law. Angola, at the time, was a prison thrown open to control by inmate gangs, the guards doing little more than keeping the men penned up inside. Threats, beatings, drugs, rape and murder were the law inside Angola. Billy Sinclair learned to deal with it, live within it, and suvive. His descriptions are true-life and graphic.The latter portion of the book deals with Sinclair's life on a somewhat different plain, as his writing skills moved him into the office of the prison newspaper and eventually into journalistic limelight. Sinclair became an inmate leader, a catalyst for reform, and eventually a primary figure in exposing corruption in the prison system. Some of his activities, however, made him a target for murder by inmates whose power base within the prison was broken.Billy Wayne Sinclair has survived and remains in prison today. This book is not a protestation of a convict's supposed innocence--Billy Sinclair readily admits what he did. This book is about prison, and it is a must-read for anyone interested in crime, punishment, or the workings of the criminal justice system.

Published by Thriftbooks.com User , 21 years ago
When I accepted the job to retype a prison memoir for computer input, I was completely unprepared for the story that unfolded as my fingers flew over the keyboard. I think the Publishers Weekly review was right on target. Sinclair has spent 35 years in the toughest prison in the country. Just as anyone who has lived in a community for that many years, he has seen people, events, and history come and go. With a powerful commitment to not becoming an animal, he carved out a life of service and dedication, both to redeem himself for his crime and to create a meaningful existence where none seemed to exist for so many. Graphic, but not gratuitous, violence spills throughout most of the first half of the book. The characters are vivid and sometimes inspiring --- Swede who was on death row and gave him classics to read, and the man who died trying to save young prisoners from the inevitable rape that awaited them at Angola. This is a worthy read.
Trustpilot
Copyright © 2022 Thriftbooks.com Terms of Use | Privacy Policy | Do Not Sell My Personal Information | Accessibility Statement
ThriftBooks® and the ThriftBooks® logo are registered trademarks of Thrift Books Global, LLC