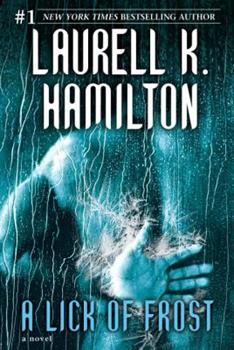 (Book #6 in the Merry Gentry Series)

I am Meredith Gentry, princess and heir apparent to the throne in the realm of faerie, onetime private investigator in the mortal world. To be crowned queen, I must first continue the royal bloodline and give birth to an heir of my own. If I fail, my aunt, Queen Andais, will be free to do what she most desires: install her twisted son, Cel, as monarch . . . and kill me. My royal guards surround me, and my best lovedmy Darkness and my Killing Frostare...

Published by Kimberly , 1 year ago
Condition as expected. I cannot wait to reread this series.

Published by Jai , 2 years ago
An amazingly decadent continuation of a store filled with mystery, magic and secrets that come alive. Spellbounding and captivating. I could not put it down. Recommended to mature audiences.

A fine blend of fantasy and intrigue

Published by Thriftbooks.com User , 13 years ago
Laurell K. Hamilton's A LICK OF FROST receives veteran Laurel Merlington's smooth and gripping style as it tells of Meredith Gentry, caught between faerie and human worlds. How can a princess in faerie world and a private investigator in another be crowned queen and continue to fill roles in both worlds? A fine blend of fantasy and intrigue will delight any collection strong in either fantasy or mystery audios.

Published by Thriftbooks.com User , 13 years ago
A Lick of Frost (2007) is the sixth Fantasy novel in the Meredith Gentry series, following Mistral's Kiss. In the previous volume, Meredith flees to the human world to escape the Wild Hunt. She and her men pop out of nowhere into the sight of a group of FBI agents and policemen. Then the Wild Hunt also appears. The cops bravely fight the Wild Hunt while the FBI agents try to take Merry to safety. When they pass a large number of goblin warriors leaving the area, Merry gets out of the car and persuades the goblins to assist her men. There she uses her Hand of Blood and the Wild Hunt transforms into nonhostile animals, including a pack of faery dogs. In this novel, Meredith's Uncle Taranis, King of Light and Illusion, has accused three of her bodyguards with the rape of a Lady of the Seelie Court. Meredith is attending a meeting with Federal and local authorities in the building of her attorneys. Two of the partners of the law firm are also attending the meeting, as is Ambassador Stevens, embassy to the Courts of Faery. The U.S. Attorney for L.A. -- Michael Shelby -- starts the proceedings by thanking Meredith and her guards for participating. Ambassador Stevens promptly reminds him that it is impolite to thank the people of faery. Of course, Meredith is used to human etiquette and so is not offended, but older nobles of the Faery Courts probably would view such words as a grave insult. Assistant District Attorney Pamela Nelson is fascinated by Doyle and Frost. She can't help staring at them. Apparently she is being affected by their glamour. U.S. Attorney Albert Veducci has had more contact with the faery than the others in the room. He has protected himself from such glamour. The other authorities are angered by the influence of the glamour, but Veducci explains that this power is inherent in almost every noble in the faery courts. Veducci lists several ways of protecting themselves against the glamour. Ambassador Stevens has a breakdown during the meeting. Although denying the gift, he is wearing a Rolex watch given tp him by King Taranis. The ambassador is seeing the Unseelie as monsters. He accuses them of using glamour to hide their ugliness. Meredith and Veducci convince the authorities to reverse their coats to protect against the glamour, yet their perception of Meredith and her men doesn't change after doing so. Ambassador Stevens, however, is still seeing them as monsters. He is taken away by building security and a physician. Meredith suggests that a licensed practitioner of magic check the watch before it is removed, for Stevens has been wearing it for years. Removal might cause even greater strains on his mind. By then, the authorities are beginning to suspect the motives of King Taranis. Meredith tells them that the glamour projected by King Taranis is much more powerful than her own, even through the mirrors used for faery communications. Veducci gets the other authorities to tuck paper clips and othe

A tragic turn of events

Published by Thriftbooks.com User , 13 years ago
The latest book from Laurell K Hamilton is still as fast paced as the previous books in the Meredith Gentry series, but this one seems to end pretty quickly as did the 5th book, Mistral's Kiss. Overall, the book was more focused on the political and more emotional side of being Princess Meredith NicEsuss, heir to the Unseelie throne, and less sexual although there are some sex scenes. A tragic turn of events shows Meredith as the mortal sidhe that she is when she has to deal with certain events that threaten her motivation to become queen instead of Cel, her evil and mad cousin, son of the current Queen Andais, Queen of Air and Darkness. The reappearance of her Uncle Taranis, King of the Seelie Court, King of Light and Illusion complicates things as we're shown the reason behind his madness and insistence on having Meredith in the Seelie Court during the Yule celebration. It definitely keeps the pages turning and once you get to the end, you are already anticipating the next book, because you want to find out what happens to Meredith and all the other characters you are introduced to: Sholto, Rhys, Galen, Doyle and her twins fathered by 6 of her royal consorts. Of course, you also want to know what really happened to Frost, one of the fathers of Merry's children.

Published by Thriftbooks.com User , 13 years ago
In this, the 6th in the Meredith Gentry series, Meredith finally gets a break from the non-stop whirlwind of sex in the past few books. Let's be frank, all amongst us, even the die-hard fans were getting a bit tired of it. I started "reviewing" the story and quickly found myself instead summarizing the entire plot so, rather than doing that and spoiling it for the few people who haven't read it yet, I'll just do a quick over-cap. Merry has to defend three of her Guards against a charge of rape from Lady Catrin of the Seelie Court - a particularly egregious charge since one of them was actually having sex with Merry at the time of the alleged rape - while at the same time trying to avoid the very dangerous attentions of her uncle, King Taranis of the Seelie court; who, she discovers, has gone dangerously insane. Then, when Frost suffers a very strange fate in the lines of a truly magical event, it causes Merry to re-think her desire to be Queen and to question the Goddess' design. I have seen many reviewers that are, by now, just so ticked off by the previous books that - no matter what Laurell K. brings out - they are just going to say they don't like it. They are likely going to vote this as an "unhelpful" review, just because they don't agree with it, which pisses me off, but that's neither here nor there. I, however, think this book has set the story back on track - the events cover only a couple of days, but there are a LOT of books out there in which the events contained therein only cover a few days, some even thicker than this one. While I agree that the two previous books should have been combined into a single book, I think this one stands by itself just fine. I was very pleased and am eagerly looking forward to the next Meredith book again.

It finally gets better....

Published by Thriftbooks.com User , 14 years ago
Without a doubt, A LICK OF FROST is the best book in the series since Laurell K. Hamilton first introduced Meredith Gentry in A Kiss of Shadows (Meredith Gentry Novels). Although there's still sex in this book, it's toned down and limited to two actual scenes, which leaves the other 300+ pages open to actual plot. This book is also very emotional, not just because of the changes that Merry's hands of power brings, but because of the way things end up due to these circumstances. I really hope that Ms. Hamilton keeps it up with the next book. Keep the sex, if you must, but continue on this path of great, emotional storylines!
Copyright © 2020 Thriftbooks.com Terms of Use | Privacy Policy | Do Not Sell My Personal Information | Accessibility Statement
ThriftBooks® and the ThriftBooks® logo are registered trademarks of Thrift Books Global, LLC