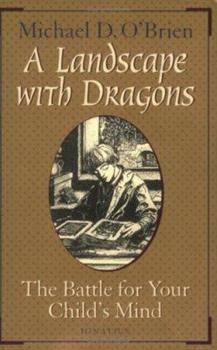 A Landscape with Dragons: The Battle for Your Child's Mind

The Harry Potter series of books and movies are wildly popular. Many Christians see the books as largely if not entirely harmless. Others regard them as dangerous and misleading. In his book A Landscape with Dragons, Harry Potter critic Michael O'Brien examines contemporary children's literature and finds it spiritually and morally wanting. His analysis, written before the rise of the popular Potter books and films, anticipates many of the problems...

Published by Thriftbooks.com User , 16 years ago
I am thoroughly impressed with O'Brien's thoughtful dissection of children's literature. The status quo mentality for most children's books is currently along the lines of "This is great! Children will love this! It's getting them to read!" As an elementary teacher, it is tempting to buy into that enthusiasm for any book series that children are eating up. But the author shows tremendous insight by pulling back the curtain and asking, "At what price?" It is a fascinating premise for a book. When you look at how radically literature (and films as well) have been altered over the last 50 years, it is certainly time we start questioning where we are headed. In the forward, David Sloan states, "In this collection of essays, we are not told where that line is; we are told how to recognize it." The book's thesis is excellent, and he works hard to persuade us without coming across as damning or alarmist. There are some places where I felt maybe he was being too sensitive, but then I just had to ask myself if being too sensitive to sin was a bad thing. The cohesiveness of the essays is somewhat disjointed; there is not much connectivity between the different chapters, which can be a little jarring. A brief summary of some of his key points, paraphrased in my own words. -The dragon, a centuries-old Western symbol of evil is being made into a friendly, misunderstood creature. -Children's moral compasses are still developing and need literary characters that exhibit heroic virtue. Their young minds do not understand flawed heroes. -That being said, they are very drawn to rebellion and dangerous things because they see them as cool, often wanting to emulate behavior of their favorite characters. -He discusses Disney movies for quite a while, concerning how the movie counterparts of classic literature have been changed to reflect less virtue. -He examines several popular science-fiction authors (including Madeline L'Engle-who I loved as a kid) and the subtle New Age influences they slip into their writing. -In his conclusion, Are Christians Intolerant? (great title) he reasons that yes, we are, and that it is good to be prejudiced against harmful things the same way it is right for a mother to be biased against snakes, wolves and other predators. -An outstanding reading list is provided at the end. What an enriching resource! Almost 100 pages of reccommended lit for children, teens and adults. This tremendous list made my wife decide we needed our own copy of this book. It is interesting to note that some of the most convincing examples of twisted children's literature and film are not even mentioned in this book, because they hadn't yet come to the author's attention. Published in 1998, Harry Potter was just starting to take off, and the phenomenally successful Shrek movies were yet to be released. When you think about how these two characters appeal to children, I became pretty convinced that O'Brien was certainly on to something. In that sense, I belie

Every Parent Needs to Read this Book

Published by Thriftbooks.com User , 18 years ago
What if you could have Dostoevsky sit down with you as a parent and teach you about the children's stories that were important to forming him as an artist and a human being? This is what is offered to every PARENT who buys this book. Michael O'Brien is a living genius who is not only a novelist of the highest caliber (having been seriously compared to Dostoevsky), but he is an accomplished artist and man of profound moral depth and wisdom. In this important book, he examines the deep structure of children's stories from old Fairy Tales and the books like The Lord of the Rings, to the modern stories on offer from Disney and others such as the Harry Potter books. Stories, tales and mythologies are important for a child's healthy development, stories change lives and guide adult decisions. O'Brien's thesis is that the big selling stories given to our chidren today carry a perverted cosmology - one that he rightly describes as "gnostic." Briefly, a gnostic world view levels a foundation built on notions of right and wrong, good and evil, heroism and villiany, and replaces it with a totalizing vision of power alone as the only good. This kind of world view has very damaging effects on children. O'Brien helps the parent to discern what literature and movies are healthy for children by giving parents the tools to discern for themselves. This is an eye opener of a book. Every parent should read it.

Published by Thriftbooks.com User , 20 years ago
This is my favorites source book for an approach for books and reading material for my children. O'Brien's thesis is that children must learn their moral ABC's as well as the letters of the alphabet. The classic tales for children has always been morality tales where "good guys" and "bad guys" are clearly delineated. Evil is not something to be "understood" or "rehabilitated" but conquered - in ourselves and in the world.The blurry greys of adult fare now infects children's stories, and it leaves them bewildered and ill-equiped for the realities of the world."Dragons" refers to the classic figures in old stories - they are to be faced, turned away, killed. Further, O'Brien is speaking to the Christian, and speaks clearly. "The Dragon" would love to have a moral landscape where no one believes in evil. It allows the con-man to creep right in before destroying you. Even those who are not theologically trained, or believers in the Christian faith will welcome O'Brien's logic, and recommendations. And his honesty in laying bare his influences.He has a very nice list of recommendations in his appendices, and my kids have been eating them up.This is a wonderful, necessary book for fathers of sons.

Published by Thriftbooks.com User , 21 years ago
I'm a single twenty year old who has no children. I had read all of O'Briens fiction novels and was thirsting for anything by Michael O'Brien. So I bought A Landscape With Dragons and read it twice over completely enthralled with what I was reading. All of my sneaking suspicions and intuitions about the culture I basically grew up with were not only confirmed, but were enfleshed, and brought out in way that was spiritually horrifying yet courageous in Michael O'Briens sustaining, powerful, sinewy way. But again, as in all of O'Briens work, one is thankful that he doesn't simply do right-wing hugging. No, he convincingly calls us to prayer and implants succesfully, as always, that ferment and spear in our conscience. Chesterton is always for me, a huge formation in the way of looking. O'Brien is always for me, a huge formation in the way of seeking sanctity in order to be looked upon.

Published by Thriftbooks.com User , 22 years ago
The essential message of this book is that minds are at war for the redefinition of the way you and your children will think, and by implication, children of generations to come.Traditional fairie tales expressed the influence the unseen world has on the world in which we live, but did so within the framework of a clear understanding of good and evil, right and wrong. Today's fairie tale is blurring the defining lines between these elements and creating a powerful, new (yet ancient) understanding that is degrading moral conscience and inviting young people to explore powers traditionally understood to belong to the 'dark side'. They even encourage friendship with any 'good' denizens of that dark side. The original edition of this book was sub-titled "Christian and pagan imagination in children's literature." The second edition more clearly focuses on the immediate problem with its sub-title, "The battle for your child's mind." I read the original edition and was thrilled with the clear presentation of the dangers. This second edition is even more in-depth in its handling of the concepts and issues. The reviewers of this book who speak negatively seem the rightful victims of the very forces exposed in the book. They give clear evidence of missing the point. The point is not, "Are all snakes bad? Aren't any dragons good?" The point is that there is a malevolent mind, unrelenting, intent on destruction, at work at every level in our world, especially operative with tremendous effect in modern literature and visual media. To miss this point is to be a victim of the hypnotic forces of deception. Those who read C.S. Lewis's 'Narnia' series will remember the Marsh Wiggle who burned his own foot in the fire in order to break the witch's hypnotic power over them. This book will help you burn your own foot in the fire so you can wake up.Our culture is in motion, changing form, calling evil good and good evil, and many who are committed to 'good' are embracing the new forms as acceptable. When our culture has finally changed completely, will there be anyone there who will even know what happened?This is a vitally important book. It is sound, sane, insightful, spiritual, discerning, and will enable readers to establish and maintain oases of light in the new dark ages that are already upon us. Don't miss it.
Trustpilot
Copyright © 2022 Thriftbooks.com Terms of Use | Privacy Policy | Do Not Sell My Personal Information | Cookie Preferences | Accessibility Statement
ThriftBooks® and the ThriftBooks® logo are registered trademarks of Thrift Books Global, LLC